Though the lives of individual species differ, a pollinating fig wasp life cycle is as follows. In the beginning of the cycle, a mature female pollinator wasp enters the immature "fruit" (actually a stem-like structure known as a syconium) through a small natural opening, the ostiole and deposits her eggs in the cavity. Forcing her way through the ostiole, she often loses her wings and most of her antennae. To facilitate her passage through the ostiole, the underside of the female's head is covered with short spines that provide purchase on the walls of the ostiole. In depositing her eggs, the female also deposits pollen she picked up from her original host fig. This pollinates some of the female flowers on the inside surface of the fig and allows them to mature. After the female wasp lays her eggs and follows through with pollination, she dies. After pollination, there are several species of non-pollinating wasps which deposit their eggs before the figs harden. These wasps act as parasites to either the fig or the pollinating wasps. As the fig develops, the wasp eggs hatch and develop into larvae. After going through the pupal stage, the mature male’s first act is to mate with a female. The males of many species lack wings and are unable to survive outside the fig for a sustained period of time. After mating, a male wasp begins to dig out of the fig, creating a tunnel through which the females escape.

Once out of the fig, the male wasps quickly die. The females find their way out, picking up pollen as they do. They then fly to another tree of the same species, where they deposit their eggs and allow the cycle to begin again.

SolMi
Posts: 337 - Karma: 14
Karma: 14
Posts: 337
Loner
I don't understand why you are so grossed out... I would eat a fig knowing that over a chicken nugget from McDonalds any day of the week..at least the wasps are organic. I have heard freshly fried tarantulas taste like soft shell crab..lots of people eat insects everyday. no need to stop eating figs.
Feb 14 2014 6:05PM 2 0 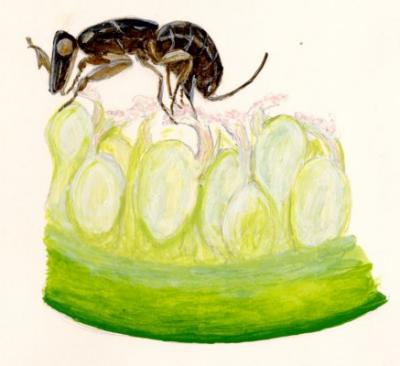 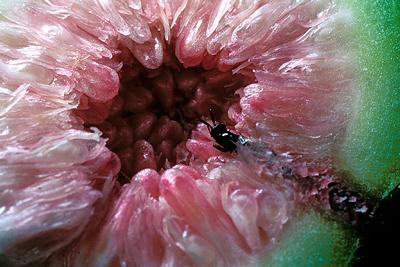