.Roockley.
Posts: 3768 - Karma: 3,248
Karma: 3,248
Posts: 3768
Addict
Shaun White and Red Bull Part ways. Twitter is filled with comments of the separation of Shaun White and the energy drink giant Red Bull. And yes my friends it all comes down to money, cash money, scrilla, paper, chedda.. Whatever you want to call it… Shaun’s got plenty. Celebrity Net Worth says he makes $20 million dollars anually. WTF.

ESPN says Shaun’s contract with Red Bull was over one million dollars per yer, ” [his] contract was valued at more than $1 million annually, and White’s team of agents at Creative Artists Agency have reportedly been seeking a beverage deal worth at least three times that” Read the full article by ESPN HERE.

We all know that in the energy drink world Red Bull is king. So if Shaun is seeking over $3 million from a beverage deal he’s going to have to look outside the energy drink bubble, maybe to companies like Coca Cola or Pepsi. But Red Bull is action sports and so is Shaun White. Red Bull sponsors thousands of action packed events every year and has way more extreme sports recognition than lets say a company like Coca Cola.

crab_pretzel
Posts: 3919 - Karma: 617
Karma: 617
Posts: 3919
Addict
i just cant see take a sip of coke at the end of a run in front of the cameras. why would you leave redbull? obviously hes got something in mind because no one just leaves a 1mil contract and hopes for something better to come along. although if anybody could pull it off it would be him
Dec 9 2011 11:28AM 0 0

Shaun White is where he is at in snowboarding because of what companies like Red Bull have helped put him there.

As a former snowboarder I can say that Shaun White is a 1 dimensional athletete that does not represent what Snowbaording is.
Dec 9 2011 12:13PM 0 0

Karma_Police
Posts: 2655 - Karma: 1,622
Karma: 1,622
Posts: 2655
Addict
What the above poster said.  Also look at there drinks the majority of them are either those  cans (monster in specific) that have the screw on lid, obviously a LOT of energy drink that I assume they just pour out and use water.

Also a little birdy told me that some of the athletes on different energy drink teams (specifically rockstar) don't like the taste and actually prefer redbull when drinking the garbage that is energy drinks.  Either way it's stupid.

I only drink redbull once a year when skiing and that's new years day because I'm obviously hella hung over.  If i need energy it's green tea, shits for ninjas.

bdarb207
Posts: 3057 - Karma: 435
Karma: 435
Posts: 3057
Addict
seriously who drinks rockstar shits gross. Red bull's the best its almost not even a matter of opinion. I've never tried another one i genuinely liked. I guess its a drink its not like he needs to be that loyal to them. Probably be bigger news (at least in the ski world) if he left burton because of money or something.
Dec 9 2011 12:53PM 0 0

pghjibber
Posts: 1297 - Karma: 321
Karma: 321
Posts: 1297
Insane
i've heard shaun was asking for 7M annually... when they didn't pony up, he just felt like he had become bigger than the brand and didn't need them anymore

and to people saying stuff about coca-cola, gretchen bleiler definitely was/is sponsored by them
Dec 9 2011 12:59PM 0 0

Cannaburner
Posts: 993 - Karma: 664
Karma: 664
Posts: 993
Insane
the thing is look at the icon he had made out of himself, yes hes being selfish and greedy, but seriously think about every person who's pro, they know their pro, they know their good, and obviously when your Shaun with how many Olympic gold medals, they are still going to want him so i am surprised they split.
Dec 9 2011 1:24PM 0 0

Yup, Travis Rice is a far better snowboarder/person than Shaun White, probably why they didn't give a shit that Ginger Bitch left.

steezywannabeezy
Posts: 990 - Karma: 681
Karma: 681
Posts: 990
Insane
Imagine what so many brokeass skiers and boarders alike could accomplish if they could ride whenever they wanted, take a chopper wherever, and have a bunch of guys build him a private halfpipe. 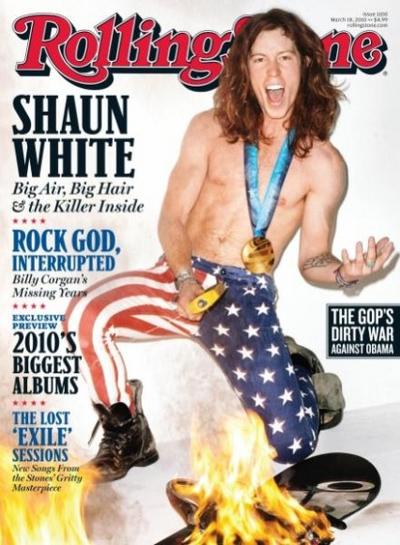