Full review of the Roxa 130 TI, including specs and Full Tilt comparisons. 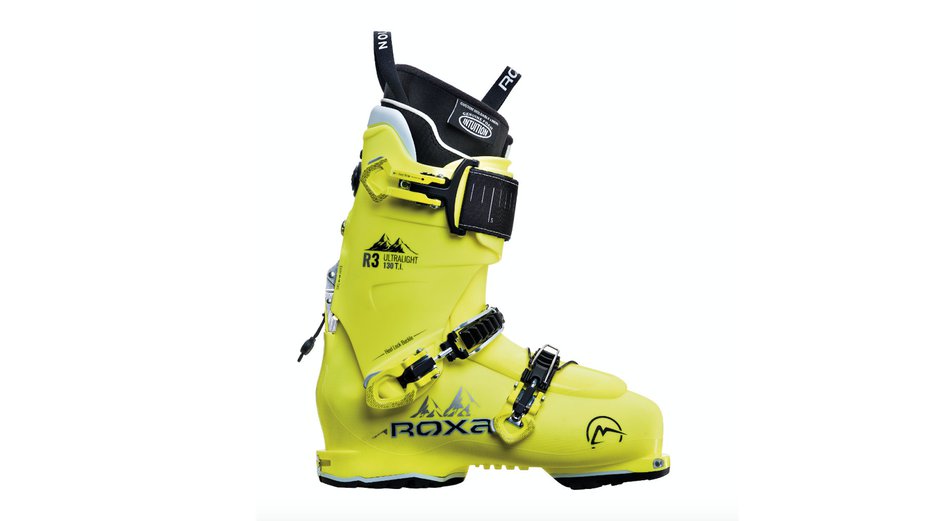 I asked Newschoolers writer (and Blister reviewer) @cydwhit what the closest boot I could get to the original shell Full Tilts but with touring features was, because I was convinced the 102mm lasted Ascendant would be too wide for my Twig-ish feet (TBD, I will be testing a pair of those soon), and these are the boots he came up with.

In terms of fit, I was delighted to have virtually no adaptation period, they fit right out of the box with a quick liner mold. That is obviously determined by your foot shape but it was a very easy transition to me. My R3s came with the wrap liner, and again, they felt very familiar. I get more pressure around the ankle bones than with Full Tilt, but otherwise I like the fit a lot.

However, I found the 130 flex R3 to be MUCH stiffer than any FT boot I've tried, both in terms of forward and lateral stiffness. That can be both a good and bad thing. Most people like stiffer boots than me. I typically ride the 6 flex Full Tilt tongue, occasionally switching to the 8 if I'm testing a particularly stiff ski. For charging lines, that can be too soft to be ideal, but since I'm used to it I get by. By contrast, the Roxa R3 130 TI felt like it gave me so much power to drive the ski. I skied them mostly on the, Line Blend, the Prodigy 3.0, and the Candide 4.0. It was an interesting contrast because the power transmission made the Line Blend feel even more insanely soft, to the point of being unskiable to me. On the Prodigy 3.0 both boots felt comfortable, the Full Tilts were nicer for jibbing, but if I wanted to ski lines forwards, the R3 was far superior. The Candide 4.0 however, felt almost impossible to ski in the Full Tilts, in a 188, I couldn't put enough power through the ski, where the R3 felt very comfortable. I would say the 130 flex was one of the more 'true' 130s I've tried that featured a walk mode. The lateral stiffness was particularly noticeable when putting the fatter skis on edge.

When it came to more playful skiing though, I actually had problems with the flex. I could barely flex the boots forwards (I weigh 135lbs or so) and that made buttering, and particularly skiing switch, a handful. When skiing the Prodigys on jumps and playful features, I actually started skiing the R3s with the tongues removed (they come off for more forward flexion when touring) and they still didn't feel much softer than my regular boots. I'd like to try them with a softer tongue and see if I could get along with them better for more playful skiing because with the tongues in, I couldn't land switch smoothly for the life of me. The 15 degree forward lean was a great help getting into more forward riding positions, but for me, they were a little too stiff for most normal ski days. The tongue, with its single ridge, also doesn't flex as progressively as the Full Tilt and the booster strap arrangement also makes them a bit more rigid feeling than even a 10 flex Full Tilt tongue (note, I replace the Full Tilt strap with a booster strap on my Drop Kicks).

However, for skiing steep lines, the power they gave was a blessing. I skied some of the biggest lines and drops I've ever skied on these, because they gave me the confidence I could drive my skis to the maximum of my ability. And they tour beautifully too. With the tongue removed and walk mode engaged, they were truly comfortable, even for long days of touring 5+ hours. For a boot that I skied out of the box with no molding or bootwork, that is nothing short of miraculous.

I used these all through the time lifts were shut down in Europe (mid-march to mid-may) and racked up a good number of days. Despite them being on the stiff side for me, I would still recommend them strongly as a great crossover boot. If you like a stiffer boot though, these did have that 3-piece feel of a Full Tilt, and the comfort. If you're used to a Full Tilt 6 or 8 flex and find that sufficient, I would definitely recommend going for the 110 flex version. If I could choose again, that's the boot I'd take.


*Update/Boot Hack: There is a y shaped metal piece in the rear of the boot attached with three rivets. If you drill out those rivets, and remove the metal piece you get an extra softening of the boot. To me it makes the flex feel a little more natural and progressive, though it's still not Full Tilt smooth.