MinggWhat are some of the weirdest things you've seen while skiing? Today I went up to the hill and someone drove a damn hearse to go skiing. Probably one of the weirder things I've seen in my life. But I guess shred til ya dead?

theabortionatorI'm trying to use my brain to scan for memories and pick out the gems but nothing yet. Will report back.

hahaha that's exactly it. So much "weird" shit happens on a daily basis at my home mountain it's hard to pin point something. what the fuck is up with people wearing these dinosaur suits?

brekkenbozzimy friend broke his leg today doing a huge backflip on the mound going up to the ski lift, not the smartest person in the world...

driftshes probably living in the hearse

lilgapaboi
Posts: 260 - Karma: 578
Karma: 578
Posts: 260
Loner
last year bunch of kids were kinda fighting and then a snowboarder walked up to another snowboarder not knowing what was even going on or why they were fighting and swung, knocking out his tooth then went down the hill not saying anything just acted like nothing happened
Jan 12 2017 1:33PM 0 0

we found a garbage can lid in the woods and brought it into the park and put it on random features to jib, until some weird kids came by and started watching us and staring us down. After a few minutes they just walked up, took the garbage can lid, and skied off into the woods again
Jan 12 2017 5:54PM 7 0

driftshes probably living in the hearse

snowpocalypseGot a verbal beat down by Maria Shriver on a lift once. She told me I was the reason California was going to hell. Arnold was on the chair ahead and was just laughing. Good times.

snowpocalypseGot a verbal beat down by Maria Shriver on a lift once. She told me I was the reason California was going to hell. Arnold was on the chair ahead and was just laughing. Good times.

snowpocalypse
Posts: 1036 - Karma: 3,527
Karma: 3,527
Posts: 1036
Insane
Alright back story. Get on the lift, I recognize its her and Arnold. They ski at my local hill often. She asks where I'm from and the normal lift small talk. This is when the Terminator was still the Govinator. I stated that I was originally from The great state of California but once the wife and I desired to start the family and the house thing we moved to the great state that we call home now. She questioned me some more. I stated that while I have much love for the state of my origin, We could not raise a family in the way we wanted too in Cali. The schools were not what we wanted and home prices were unrealistic for the area we wanted to live. This did not go over well. She stated I was the reason California was going down the tubes and I was not a true Californian. Which I rebutted " aren't you from New York and sorry I can't afford homes in every state I visit. Things progressed from there. I was called a low life scum. I laughed in her face...... Arnold thought it was funny.... She did not..
Jan 26 2017 5:32PM 6 0

robbinJAHoodHe gave me a thumbs up

robbinJAHoodSaw a guy getting head on the lift chair on the back side of our mountain last week. He gave me a thumbs up

Alright, first, this is fantastic!

I was a coach my first real job out of high school. It was my first day, I'm waiting for the rest of the kids in my ground and suddenly I see two of the other coaches laughing their asses off so I go up to them.There is kid sized gear everywhere, jacket, helmet, gloves, a boot. Total mess. The kid was throwing one of the most monumental tantrums I've ever seen of or heard of in my entire life! Would not let his mom put his stuff on, did not want to go skiing, was not having it.

The kid goes tearing back off into the parking lot and I regret to inform you I missed the best part. Apparently the mom had picked up the other boot and chased him down to shove it on. In the process of being bent over and distracted, the kid grabbed her g-string thong and YANKED the biggest wedgie the world has ever seen. God I felt so terrible for her, I hugged her and another coach took the kid to the office and kinda talked him through his epic issues with skiing. Turned out to be one of the most improved, albeit his mom was bribing him to go, but still.

TL;DR: little kid nearly ripped his mom's thong whilst giving her a wedgie out of anger in the parking lot while she was trying to redress him during a mass tantrum.
Jan 28 2017 1:54AM 1 0

crusty local cat driver who swears up and down that his tele ski blades are the best possible set up you could imagine.

i like this thread. skiing is weird all by itself, and it definitely attracts weird (interesting) people
Jan 28 2017 3:58AM 4 0

jlens05I saw a ski patrol dude absolutely slaying tele skis Cindy's at HV one time with one of those sled things they carry people on. Not super weird, but awesome.

brekkenbozzimy friend broke his leg today doing a huge backflip on the mound going up to the ski lift, not the smartest person in the world...

J_SHe tried to be candide

brett_fisherGot chased by a deer once

NoImNotaBoarder
Posts: 86 - Karma: 46
Karma: 46
Posts: 86
Wannabe
I was just nightskiing last night and we were making some quick adjustments and some guy got off the lift with one of these on. 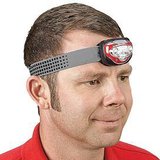 NoImNotaBoarderI was just nightskiing last night and we were making some quick adjustments and some guy got off the lift with one of these on.

Also just remembered this one. There was this little like maybe 15 or 20 foot step down. I hit it and rode off to the side to wait for my friends. One of my friends hits it and comes over by me to wait. Then this little kid comes and as little kids in the park do, rode over the jump way too slow, and just flops down on the table and pops out of his skis as he bounces around on the ground. Then his mom comes up and spends a good five minutes lecturing the kid about whatever while they're just standing right on the landing of this jump with like 10 people waiting to hit it.
Jan 31 2017 4:11PM 0 0
All times are Eastern (-5)