This dude will soften your landing.

Bar_Down
Posts: 5896 - Karma: 386
Karma: 386
Posts: 5896
No Life
Build a box of sorts, put the car inside the box. Attach a bunch of helium-filled balloons to the top of the box in an attempt to slow down the fall and deal with the whole landing right side up issue. Have a bunch of sponges attached to the bottom of the box. Leave one of the sides of the box open so once the box lands, just put the pedal to the metal and the car will fly out of there and land on the ground, at which point you drive it to the finish spot.
Jan 28 2014 4:41PM 0 0

prosnurfer
Posts: 1842 - Karma: 83
Karma: 83
Posts: 1842
Insane
how big and heavy is the car to be used? if its small and light id try the box parachute idea, also does it have to drive off the drop or is someone dropping it? another thing you could try is to make a big wheel casing the car sits in for the drop maybe the car could power the wheel to the finish zone. put it in a mini zorb ball it will be unstoppable.
Jan 28 2014 5:27PM 0 0

triss
Posts: 1293 - Karma: 2,915
Karma: 2,915
Posts: 1293
Insane
its simple like how a bullet can have the same Momentum as someone throwing a brick.
P(momentum) = mass * velocity
a bullet will have a faster velocity but smaller mass
a brick has larger mass and lower velocity
in the end they can equal
soooooo
u have to use a cushion that will slow down the car when it falls. Something that will slowly release air when pressed upon.
Its the same shit why stunt guys use foam mats to slow velocity.
in the end i would use a woopie cushion ( no joke )
science betch
Jan 28 2014 6:06PM 0 0

DIPED_IN_SAUCE
Posts: 858 - Karma: 2,256
Karma: 2,256
Posts: 858
Insane
Mars rover style air bags. Put small holes in them so they slowly deflate under pressure and the wheels will touch the ground. Material could be some bicycle inner tubes or something. 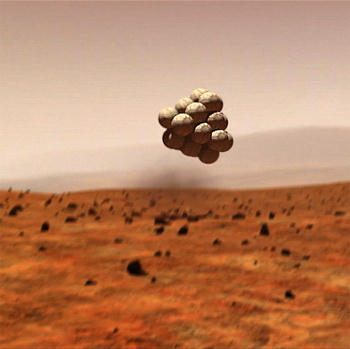 Are you designing it?

Is this fully automated or RC?

5' isn't that high for something small. If you are building the car just put really big wheels on it. Wheels so big it doesn't matter which side it ends up on when it lands. 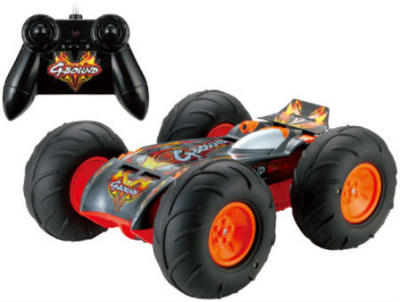