How much are my skis worth?

Look up wort in Wiktionary, the free dictionary.

Wort /ˈwɜrt/ is the liquid extracted from the mashing process during the brewing of beer or whisky. Wort contains the sugars that will be fermented by the brewing yeast to produce alcohol. 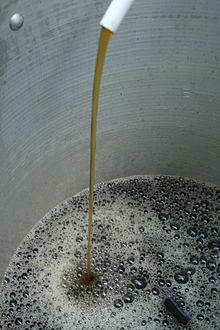 The first step in wort production is to make malt from dried, sprouted barley. The malt is then run through a roller mill and cracked. This cracked grain is then mashed, that is, mixed with hot water and steeped, a slow heating process that enables enzymes to convert the starch in the malt into sugars. At set intervals, most notably when the mixture has reached temperatures of 45, 62 and 73 °C (113, 144 and 163 °F),[1] the heating is briefly halted. The temperature of the mixture is usually increased to 78 °C (172 °F) for mash-out. Lautering is the next step, which means the sugar-extracted grist or solids remaining in the mash are separated from the liquid wort. Inhomebrewing, the malt-making and mashing steps can be skipped by adding malt extract to water.[2]

The mixture is then boiled to sanitize the wort and, in the case of most beer production, to extract the bittering, flavour and aroma from hops. In beer making, the wort is known as "sweet wort" until the hops have been added, after which it is called "hopped or bitter wort". The addition of hops is generally done in three parts at set times. The bittering hops, added first, are boiled in the wort for approximately one hour to one and a half hours. This long boil extracts resins, which provides the bittering. Then, the flavouring hops are added, typically 15 minutes from the end of the boil. The finishing hops are added last, toward the end of or after the boil. This extracts the oils, which provide flavour and aroma but evaporate quickly. In general, hops provide the most flavouring when boiled for approximately 15 minutes, and the most aroma when not boiled at all.

At the end of boiling, the hot wort is quickly cooled (in homebrewing, often using an immersion chiller) to a temperature favourable to the yeast. Once sufficiently cooled, the yeast is added, or "pitched", to begin the fermentation process.

The adjunct grains that can be added to the mash include wheat, corn, rye, and rice. Adjunct grains may first need gelatinization and cooling.[3] They are used to create varietal beers such as wheat beer and oatmeal stout, to create grain whisky, or to lighten the body (and cut costs) as in commercial, mass produced pale lagers.