Aidan-G
Posts: 9411 - Karma: 10,768
Karma: 10,768
Posts: 9411
Crazy Fool
A woman described by lawmakers and aides as a long-time House stenographer has been removed from the chamber during a vote after she began shouting.

The woman was yelling from the rostrum Wednesday just below where the House presiding officer sits. The microphone she was yelling into was off.

Lawmakers said she was yelling about the House being divided and the devil. Texas Democratic Rep. Joaquin Castro said she had a crazed look on her face.

As she was led into an elevator by security, she was heard to shout, "This is not one nation under God. It never was."

She also screamed, "Praise be to God, Lord Jesus Christ."

The outburst occurred while the House was voting on legislation ending the government shutdown and extending the federal debt limit.

Just remember, this is in no way influenced or indicative at all of the attitudes pervading the House at the moment.
Oct 17 2013 1:30AM 1 1 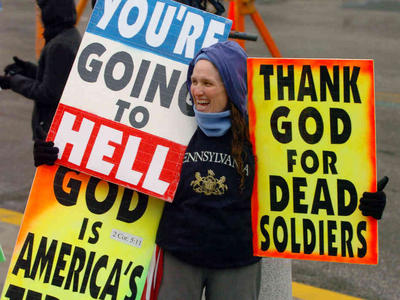 K, consider this. Your most easily influenced while your a child growing up right? this is probably the time in your life that most shapes who you will become.

Religion tells children that they are constantly being watched, judged, and if they don't behave they will be tortured, burned, dismembered (OH and look! pictures!).

Religion is psychological child abuse. It has severely crippled our society.

If you view it as a book or morals... well fuck, I'm not even gonna get into that. Take a history lesson and you'l understand how much the church contradicts its teachings and has held back human progression as a whole.
Oct 17 2013 6:09AM 12 5

Obi-Wan-Jenobi
Posts: 951 - Karma: 119
Karma: 119
Posts: 951
Insane
Wrong sir, Christianity teaches that yes you have been judged and failed, but also that you have been saved and redeemed. Just because some people are hypocrites and don't act out what they claim to believe doesnt mean those beliefs are any less merited. Read a philosophy book. Christian morals are among the most beneficial in the world.
Oct 17 2013 11:33AM 4 12 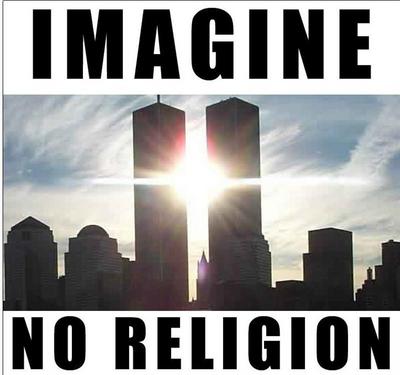 You're a fucking moron get the fuck out of this thread, if you need religion to be a better person then you are a terrible human being and should kill yourself. So you can go to what ever heaven and believe in, and leave us be to buy beer on sundays.
Oct 17 2013 12:34PM 15 3

Mr.Huck
Posts: 6096 - Karma: 14,766
Karma: 14,766
Posts: 6096
No Life
This has nothing to do with religion. I don't think that there has ever been a more toxic political environment in this country. I am actually surprised that more people aren't losing their shit in Congress. You'd have to be insanely brave or just insane to run for public service.

Sorry to rustle the jimmies of the Obama worshipers on this site, but it actually is the President's fault. Good presidents and effective leaders are able to rally members of both parties to work together. They don't accuse the other party of being terrorists because they won't go along with everything. People in congress were elected too. They were elected by people who wanted someone to share their concerns at the national level. What kind of person goes to Washington and just caves in to everything, and betrays the people who sent them there?

There has to be compromise on both sides, and that is pretty tough when you have a president who won't even talk to leaders of the other party until the 11th hour when the situation has gotten critical.
Oct 17 2013 12:39PM 6 8

Aidan-G
Posts: 9411 - Karma: 10,768
Karma: 10,768
Posts: 9411
Crazy Fool
How are you supposed to rally people who literally ran on a platform of "If Obamacare isn't 100% destroyed we will shut down the government" a la the 80 superincumbent tea party members created as a result of the redistricting?

If anything, historically speaking, Judaism is the most beneficial because we have been around for the longest and hell, without Judaism there would be no Jesus. So everything that is Christianity roots from Judaism.

Kooky_Lukey
Posts: 996 - Karma: 1,904
Karma: 1,904
Posts: 996
Insane
Well to say religion doesnt affect someones life is just stupid whether it be a positive or a negative way. Just if everyone would keep their opinions on these subjects to themselves because you are not going to change how anyone thinks over an internet forum.
To go along with your evolution thing yes. I just think that the south park rendition is pretty damn hilarious
Oct 17 2013 1:20PM 0 2

deleted5
Posts: 14507 - Karma: 13,438
Karma: 13,438
Posts: 14507
Crazy Fool
It changed mine when i first came on NS i was 15 and i went to church almost every Sunday. if you bump some really old threads I said some Pro god stuff. But after looking at peoples posts on here I did some research for myself, and looked at and learned both sides. After looking at my research I found out I was brain washed as a kid to believe untrue and ridiculous things. So thank you people of NS for making me a better, and smarter person.
Oct 17 2013 1:25PM 4 1

act.resist
Posts: 8875 - Karma: 498
Karma: 498
Posts: 8875
Crazy Fool
this is just how i see it, feel free to say differently. But I feel that if there were no religion, the world would be in a worse state or even the same state that is in. Although wars and conflict have arose from religion, it also has a peaceful side. A side that gives a lot of people hope in knowing that we aren't alone. It may just be a facade but that doesn't make it a bad thing.

If we didn't have religion wars would still happen, we're a territorial species and generally we like to start fights.
Oct 17 2013 1:46PM 2 5

Mr.Huck
Posts: 6096 - Karma: 14,766
Karma: 14,766
Posts: 6096
No Life
You guys crack me up. Obama believes that he represents only the people who voted for him. You believe, obviously, that there should only be one political party of people who think like you. One day you will figure out how dangerous that is.

If Obamacare is so great, how come the government hasn't released any data on how many people have signed up. There is an estimate out there that it's about 36,000. Less than 1% of the people who visited the site and went to the registration page have signed up. When Obamacare fails on its own merits, good luck blaming Republicans. 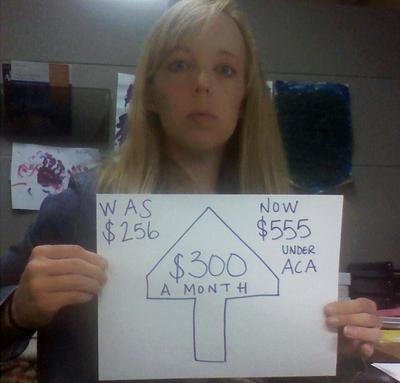 Obi-Wan-Jenobi
Posts: 951 - Karma: 119
Karma: 119
Posts: 951
Insane
Science and faith are not mutually exclusive. I am a christian and have no problem believing the age of the world to more than 12000 years i agree with most aspects of evolution. Your just coming off as another loud and obnoxious atheist.
Oct 17 2013 2:43PM 0 4


And there are countless other organizations, religions, groups, etc. that believe that love for everyone and equal treatment.

Bogs
Posts: 4296 - Karma: 1,346
Karma: 1,346
Posts: 4296
No Life
isn't the idea of brainwashing that you only ever learn about one side of an issue and so agree with it because you don't know anything different? If you understand both sides of something and then make a choice based on this understanding I don't think you're being brainwashed...
Oct 17 2013 2:52PM 2 0

Obi-Wan-Jenobi
Posts: 951 - Karma: 119
Karma: 119
Posts: 951
Insane
Yes, although Christians should support Gay people, as in love them like any other person, we do not support the gay lifestyle. Its like we have no problem with liars we all make mistakes but we do not support lieing.
Oct 17 2013 3:01PM 0 2

Aidan-G
Posts: 9411 - Karma: 10,768
Karma: 10,768
Posts: 9411
Crazy Fool
We went through this already. The majority of Christian denominations do not support gay marriage. I had the numbers and the research to back it up. Stop acting like it's not a fact

deleted5
Posts: 14507 - Karma: 13,438
Karma: 13,438
Posts: 14507
Crazy Fool
I fail to see how me saying Republicans shut down the government, has anything to do with your post. The government hasn't released any data on how many people have signed up. (and this is my guess i have no idea because I'm not in the government) because A they've been shut down B there still in the process of fixing their site that broke down and C lets give it a little more than a month before we come to a concussion that Obamacare is going to be the down fall of America.

I believe that there should be no partys in government, and idc what they believe as long as they are voted for and, work for the best interest of the people. Which no one in the government is currently doing, they're all being backed by cash and that is going to be the downfall of our country. Money in politic is the rote of all political evil.

I see you own a company with more than 50 people (or so you claim) so i can see why you would hate Obamacare, and I respect your opinion in disliking it. (although i don't agree with it.) However, I do not respect your statement that the shut down is Obamas fault when the gop shut down the government.
Oct 17 2013 3:04PM 2 0

Aidan-G
Posts: 9411 - Karma: 10,768
Karma: 10,768
Posts: 9411
Crazy Fool
True but the Nazi party, which a lot of people joined so they weren't killed by the very same party, is a lot different than the voluntary membership of Christianity. The amount of people who believe what they're denomination believes is going to be vastly higher than that of the Nazi party

roddy116
Posts: 10525 - Karma: 6,481
Karma: 6,481
Posts: 10525
Crazy Fool
I find your generalizations disturbing, I dont know what kind of facts you find but if you just look at denominations you really are just looking at a belief.
Take the boy scouts, they changed the gay issue, but before they said they were against homosexuality.
But the FACTS (since you care that much) show that the PEOPLE in the ORGANIZATION were FOR HOMOSEXUALITY.
You dont know what your talking about when you look up your facts, I am part of a group of the people you are talking about, so stop talking.
Oct 17 2013 3:35PM 0 0
All times are Eastern (-4)