corona
Posts: 12382 - Karma: 28,216
Karma: 28,216
Posts: 12382
Crazy Fool
do you think the person running a toothpaste ad on TV is saying 'damn all those people who mute the commercials and never buy my product while watching the show for free!!'. no. they accept that there's a certain percentage of people who will mute the ad and never buy their product all the while taking advantage of the TV program that's running. there will always be those people.

same with people who will download music for free but would never pay for it if it wasn't for free.


so no, it's not lost revenue since it's a market you'd get no money from anyways. maybe there's a very small % that would use adblock but would also pay a subscription if it came to it. but still it's only like 15% of people who use adblock. it's not that much. just accept it happens and forget about it. it's part of doing business on the internet.
Jul 15 2013 9:40PM 1 0

00000000
Posts: 11075 - Karma: 82,457
Karma: 82,457
Posts: 11075
Crazy Fool
It's still lost revenue.
I think this is a horrible example, but I'll play ball because I'm stubborn & honestly think I can change your mind. Hell, I'd even go as far as to say that Newschoolers depends on it...
- The person running a toothpaste ad on TV isn't making money off of people watching an ad -- he's making money off of people buying the toothpaste. (In contrast, we're making money off of people watching ads on our site)
- People will buy toothpaste whether or not they see an ad about toothpaste. Toothpaste companies make money by selling their toothpaste, not by people watching their ads. (In contrast, we don't get any revenue if people don't see the ads running on our site)
- The TV show and network make their money from ads both in and around the show, along with other sources of revenue. (In contrast, we only make revenue from ads)
- People pay for television and streaming services. (In contrast, people don't pay to use Newschoolers)
- Newschoolers doesn't charge a dime for people to use our site. Hell, we actually pay our members for using it.
- The only source of income Newschoolers has is through ads -- so if everyone used adblock, NS would literally have to shut down.
- What would we do with an extra 75k? We put it right back into improving the the site! We'd bring you features you've been asking for. We'd inject a shitload of cashflow into photographer, producer, and journalism programs. Maybe we'd do a free tour or license movies for web premieres. Maybe we'd finally develop a killer NS app. Either way, we wouldn't pocket it -- but use it to give back to the members that support the site.
Just my 2 cents!
Jul 16 2013 7:26AM 0 0

Your point here is actually the reason that AdBlock is so destructive to websites.

The person running the ad knows that they want to advertise on television. The person running the ad on television knows a bunch of things about television - viewership statistics are inflated, people not only mute ads but PVR the shows, and that Television is the single best influencer in traditional media. So that brand selling toothpaste has no choice but to accept the viewership statistics that TV network gives them, and those inflated numbers.

Its actually a reason that a lot of ads are starting to push online. You get tracking, you only pay for views that actually get seen and you can see exactly what your customers did after clicking on said ad. Fantastic for the advertiser... all of a sudden they don't have to tolerate waste.

For an online publisher, as Jason said - we have an issue. Long ago many online publishers decided to break the traditional media model where you both paid for your content and viewed advertising all over it. We decided heck - if people are going to look at ads might as well give the shit away for free - that is only fair.

AdBlock changes the game because it actually stops the ad call from going back to the server. So the advertiser never even knows that the view happened, and as such is never billed for the ad view. Great for the advertiser, but the online publisher can only charge for what actually happens - and as such its simply lost revenue for us.

To boot, we only have the exact stats we report, so we don't have these crazy over-inflated "We're in 22 million homes!" type of statements we can make to advertisers. So we can't lie about how many people we reach, and we can't lie about exactly how many ad views they saw.

This is the reason you're seeing paywalls being erected around content everywhere. Users simply are breaking the arrangement of free content in exchange for advertising views. Sure you may philisophically say "Fuck that, I can install AdBlock and view whatever I want." - and you're right - the problem is that we aren't able to pay for what you want to view. Sadly, the really good content still costs money to buy, create or whatever. Every day that a new awesome am production company starts posting rad edits is a day that a slightly older and more seasoned production company realizes they can't be giving their shit away for free.

Every time someone puts NS on their whitelist, you help us just a little bit more. As Jason said, we're dumping anything we can right now right back into paying those content creators who need money to keep making their content. So the more ads you view, the more you contribute back to the system directly.

I'm not stupid enough to think that we can turn everyone. I know there is people out there that are going to no matter what vview Newschoolers ad-free, and there isn't a ton I can do about that. The only thing that you may see happen is that if we want to take content to the next level, we'll need to look at other opportunities to raise revenue. Money must somehow flow from the end user into the NS coffers, so that we can run a business and push that revenue back out into our economy of content creators.

So if you use AdBlock, and you refuse to whitelist NS - consider making regular small donations, buying shirts or suggesting ideas for what you would do to contribute back to the system. 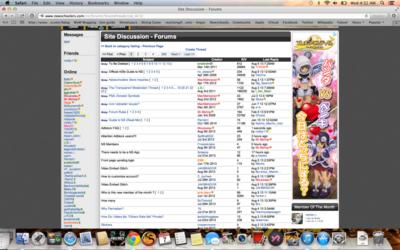 Randy_Quench
Posts: 5444 - Karma: 4,320
Karma: 4,320
Posts: 5444
No Life
so Im a donator and I've bought things through the ns store, but because I don't allow ads on your website you're gonna make me look at this ugly red banner?
My internet at home is awful and with adblock off- newschoolers takes eons to load. So adblock actually helps me stay an active member on NS. without it I probably wouldn't visit at all because lack of patience.
Aug 7 2013 9:44AM 0 0

Like you said in your post, the majority of the ads aren't that bad. We're running some remnant inventory since it's the summer, but once the fall hits you'll start seeing a TON more ski related ads -- which generally are pretty well done and actually make me want to click them.

Also look at it from the advertisers perspective. The people that believe in NS believe that our members (you guys!) are important to them. There's very few brands out their that value their customers as much as the NS advertisers do.

Walk up to the Mooseman or I at any time, state "I don't use AdBlock" and we owe you a beer.