TWoods
Posts: 9972 - Karma: 7,929
Karma: 7,929
Posts: 9972
Crazy Fool
Shooting film while skiing can produce some awesome results in some circumstances and light, but overall I wouldn't choose skiing as a subject to shoot on film. Specifically in the park. Maybe it's just me, but shooting sports and action is so tricky to begin with that I want to be able to not have to worry about the limitations of film, the time it takes to use and the necessity to shoot precisely as additional factors to worry about.

Also, personally, I think having really crisp, clean images is suited for action sports, and having the control over.

I would suggest trying to shoot film for portraits or other general photography - being able to think about your process in a controlled environment and without having to have perfect timing and a time crunch is what makes film fun, IMO.
May 7 2013 3:20PM 2 1

DingoSean
Posts: 23146 - Karma: 17,410
Karma: 17,410
Posts: 23146
@th1337
Get some higher speed film, and a neutral density filter so you can really monitor your shot correctly, and still use a lower Fstop, if you're going to do it.
really, shooting skiing with film is pretty cool I think and yields some interesting results. I don't get the whole 'you can't shoot sports with film' stigma that a lot of people have developed these days. I mean, shit. People did it for YEARS guys. If it's a little blurry? who cares... you shot it on fucking FILM and the process makes it sweet!
First 35mm roll I ever shot of film was back when I was probably 12 years old, and I pumped a roll of 36 black and white frames through my mom's Olympus XA2. My focus was a bunch of friends going off dirt jumps on bikes and skateboarding and shit.
A few of them were blurry, but everything was fast enough to give real sharp images for the most part. I cherish those shots to this day.
/nostalgia
May 7 2013 6:26PM 3 0

DingoSean
Posts: 23146 - Karma: 17,410
Karma: 17,410
Posts: 23146
@th1337
9xi is probably the most affordable way of getting that kinda stuff. Still can't believe that shutter was mechanical. Only problem was minolta's retarded use of cards, which makes lots of their functions useless if you don't have them, but whatever.
I use an Elan II/EOS 50 for sports film, usually (though I haven't done much of which). You can get them for dirt cheap, they have an adequate AF system, and 4000 speed shutter means it's basically like shooting film with a T3i or something.
May 7 2013 8:17PM 1 0

skiP.E.I.
Posts: 6129 - Karma: 8,206
Karma: 8,206
Posts: 6129
No Life
I got a DSLR at the beginning of this season and I still prefer shooting film almost every time. I also don't mind having less than pristine shots though.
35 mm film, when shot and processed correctly and scanned at a high res. still has as good or better resolution as a full frame DSLR
Here are some of my skiing shots with film: 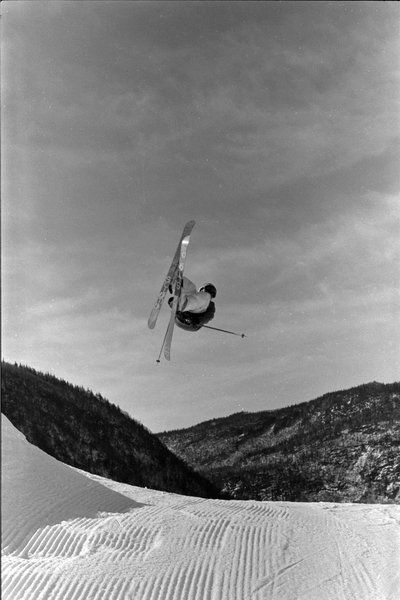 zbphoto
Posts: 7789 - Karma: 12,034
Karma: 12,034
Posts: 7789
Crazy Fool
I've shot skateboarding on film before as do a lot of proffesional photographers. I'd probably shoot overcast pow in the trees on b&w. But for me, I just care enough about park skiing to spend money and put time and effort into shooting it on film so..... Anything fine art'ish thought, like my architecture stuff, always on film if available!
May 8 2013 9:04PM 1 0