Laurent.
Posts: 10054 - Karma: 25,251
Karma: 25,251
Posts: 10054
Crazy Fool
Tomorrow is the first race of the season.
Who will win this year?
Will Alonso finally get his revenge on Vettel?
Will Kimi eat an icecream, get drunk and fail to clear fences, whilst still driving properly good?
Will Webber wobble?
Will Hamilton do well at a new team?
Will van de Garde prove he is not just a paydriver who shelved out ten million for a seat?
Already some controversy: The final two stages of qualifying for the 2013 Formula 1 Rolex Australian Grand Prix have been postponed until Sunday due to heavy rain at the Albert Park circuit. 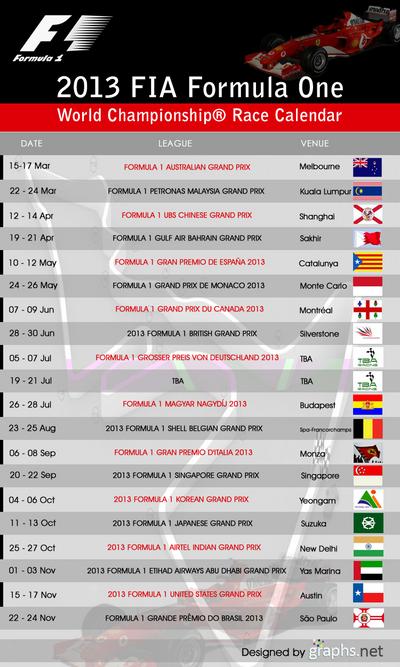 Also and because tall iPad man left, the BBC have a new presenter, which they announced in a very much awesome BBC way: 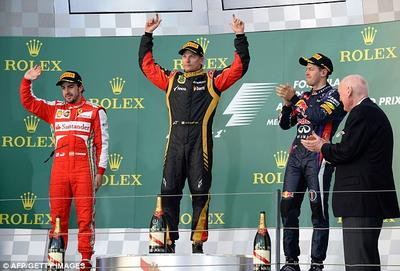 shintastic48
Posts: 2909 - Karma: 45
Karma: 45
Posts: 2909
Addict
Great first race. Not exciting to watch from a overtaking standpoint but, the strategy was really compelling. Congrats to my man Kimi on the victory. So surprised to see McLaren so far off the pace. Lets hope they turn things around quickly.
Mar 17 2013 7:37AM 1 1

Why are they driving more sports car looking things in the le mans series? I have no fucking idea.

shintastic48
Posts: 2909 - Karma: 45
Karma: 45
Posts: 2909
Addict
Le Mans has two main types of cars that run. Prototypes and GT's. The Prototypes are very similar to Formula 1 cars just they have the wheels covered and are running with a little bit more downforce along with less power. Still wicked fast cars though. GT cars are cars based off of your everyday production sports cars just in GT spec. The main differences after that are that Le Mans is an endurance based series (Shortest race being 1000Km long usually) while Formula 1 is a much shorter race distance.
Mar 17 2013 9:07PM 1 1

Laurent.
Posts: 10054 - Karma: 25,251
Karma: 25,251
Posts: 10054
Crazy Fool
Lewis became 5th. Started out third on grid. The BBC has a great tool with all the standings after practise, qualifying, grid and race: http://www.bbc.co.uk/sport/formula1/2013/australian-grand-prix/results/race
As for the difference in speed between LMP cars and F1, thera are one or two in this vid:
The speed of an F1 cars is just bonkers, it's ridiculously fast in everything it does.

XtRemE11
Posts: 5668 - Karma: 344
Karma: 344
Posts: 5668
No Life
So stoked to see kimi win, i really hope he ends up being a championship contender this year. IndyCars season opener is this coming weekend, which should be equally as interesting, last years season was actually extremely entertaining, almost more so than F1.
Mar 18 2013 1:15PM 1 1

Formula One cars use semi-automatic sequential gearboxes, with regulations stating that 7 forward gears and 1 reverse gear must be used, with rear-wheel drive.[7] The gearbox is constructed of carbon titanium, as heat dissipation is a critical issue, and is bolted onto the back of the engine.[8] Full automatic gearboxes, and systems such as launch control and traction control, are illegal, to keep driver skill important in controlling the car.[8] The driver initiates gear changes using paddles mounted on the back of the steering wheel and electro-hydraulics perform the actual change as well as throttle control. Clutch control is also performed electro-hydraulically, except to and from a standstill, when the driver operates the clutch using a lever mounted on the back of the steering wheel.[9]

A modern F1 clutch is a multi-plate carbon design with a diameter of less than 100 mm (3.9 in),[9] weighing less than 1 kg (2.2 lb) and handling around 720 hp (540 kW).[4] As of the 2009 race season, all teams are using seamless shift transmissions, which allow almost instantaneous changing of gears with minimum loss of drive. Shift times for Formula One cars are in the region of 0.05 seconds.[10] In order to keep costs low in Formula One, gearboxes must last five consecutive events, although gear ratios can be changed for each race. Changing a gearbox before the allowed time will cause a penalty of five places drop on the starting grid for the first event that the new gearbox is used.[11]

Laurent.
Posts: 10054 - Karma: 25,251
Karma: 25,251
Posts: 10054
Crazy Fool
Too bad FIA is putting so many restrictions on them.
The most technologically advanced car is often considered to be the the 1992 Williams FW14B.
New cars have more cleverly designed parts but not the same technology onboard because that's forbidden. 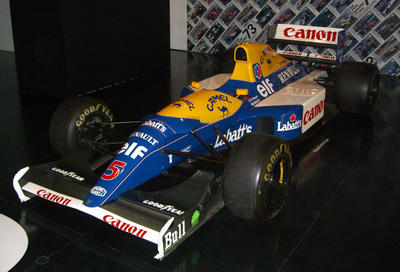 This thing outpaced the rest of the field by such a margin it almost didn't need a driver, it also featured active suspension (now forbidden).

XtRemE11
Posts: 5668 - Karma: 344
Karma: 344
Posts: 5668
No Life
lol at 4 non blondes playing in the background. but yeah, F1 would be absolutely insane right now if they never banned active suspension and were a bit more lenient with the restrictions they put in place. i dont know how good the racing would be, but the capability of the cars could be so insane.
Mar 21 2013 9:09PM 1 1

Also, for anyone living anywhere near Texas. Go to the Austin GP this year! Went last year and it was an extraordinary experience I will never forget. Not just the race itself but the whole auroma behind the weekend, meeting so many internationals and seeing all the posh in the sport.

shintastic48
Posts: 2909 - Karma: 45
Karma: 45
Posts: 2909
Addict
Not an interesting race from an overtaking standpoint but, a very compelling drama filled race.
Top 3;
1st - Vettel
2nd - Webber
3rd - Hamilton
1st point of drama. Vettel overtaking Webber despite being given instructions multiple times to not overtake and stay station behind him.
2nd point of drama. Rosberg being told that he was not allowed to overtake Hamilton and to stay stationed behind him.
Discuss.
I personally think that Webber has it written in his contract that, he has to be given a win every season if he is in a winning position, like he as today. I think that Red Bull was trying to get that win out of the way so it wouldn't come back and hurt Vettel later in the season. Red Bull knows that Vettel will be there for the Championship at the end, and not Webber.
As for the Mercedes GP drama. It's very likely that Hamilton has in his contract that he MUST be 1st driver at all times and will always be given priority of Rosberg. Something that the Sky Sports broadcast mentioned, and I wouldn't count that out. Why else would Hamilton leave McLaren. He had to be given some sort of huge benefit.
Mar 24 2013 10:14AM 1 0 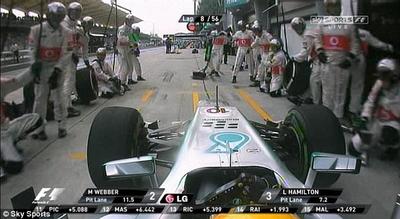 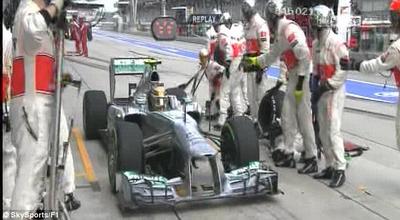 406
Posts: 2302 - Karma: 92
Karma: 92
Posts: 2302
Addict
This was just another great race in F1. I think the money involved in this sport is absolutely astonishing. My buddy was saying that Hamilton is getting $100 million to be basically carried by his teammate every race?!

Hamilton pulling into the Mclaren pitstop was golden...

I dont mind the Vettel pass for the win, just like I was disappointed to see Rosberg be placed into 4th place. I love all the drama between ignoring a teams orders, which is just something you should not do if your team is redbull, which does everything possible to help you succeed. The guy just loves the competition and loves to win. Maybe he just gave this one to his teammate this time, kept redbull happy, and still won the championship in the future? Fuck that though. Rosberg muttered "remember this one" after he had to give up the race to his teammate and settle for just outside the podium.

My boy Perez had a pretty good race...stacking up all the points for Mclaren this morning, which was on point as far as the pit crew....they even looked ready for Hamilton when he stopped by haha!

Massa is looking to overtake Alonso too atm.

Couple of points for me.

1) Vettel's pass at the end was BS. The main reason for me being that Webber let up last few laps based on team orders to preserve tires. Had he raced hard, no way Vettel would have caught up and made the pass. That's the biggest reason I think Webber was pissed, he had it in the bag and Vettel passed out of the blue. Had he really been right behind him with, say, 10 laps to go, don't think it would have been as big of a deal.

2) Although I understand all the $$ behind the sport and why team orders happen, I think they should stop. It is bad for the fans. If I am paying $500 + for race tix & travel (which I have), I want to see a RACE, not a finishing order based on team orders. I will always love F1 and will likely go to another race, but in the end this is an entertainment business that would be nowhere without the fans, so they should try to make it as best for them as possible.

volvotom
Posts: 2045 - Karma: 712
Karma: 712
Posts: 2045
Addict
NBC Sports network has the US broadcast rights now. All races will be live and replayed during the day as well as qualifying.

It was funny watching all of the team managers get all angry towards the end.

shintastic48
Posts: 2909 - Karma: 45
Karma: 45
Posts: 2909
Addict
Red Bull has already stated that Webber will most likely be out of a ride this year. So obviously we know who they sided with in the end. The guy that has brought them 3 championships in a row. Not the guy who is a mid 30 year old baby and outwardly shows his anger in public and gives Red Bull a bad name.
Mar 28 2013 7:31PM 1 0

Such a good race...my poy Perez flexing his weight for the rest of the season