New feature in the forums

Wanted to let you all know about an exciting new feature that's coming to the forums later this week...the ability to rate individual posts.

We've made the decision to add this feature because it will do much a better job of determining the best quality threads via ratings (which will in turn appear on the homepage) in a more accurate way, as opposed to an overall thread rating.

Please note that this feature will NOT change or affect the ordering of posts or threads, as we will never get rid of the ability to view forums by the latest added view. It will simply act as a way for you to determine the best quality threads and the ones that show up on the homepage.

In addition to this heads up, we're looking for some people to help us test this feature and provide feedback, so if you're interested, please send me a PM.

However, the more we have been thinking about this, the more that this likely should be something we take into consideration in the future.

For now, this feature is going to launch and we'll kind of see what the data looks like.

Obviously this system is going to grow time. Hopefully there will be some things in this post that other testers will obverse using the system or think about after reading about them in this thread.

I think I was the second person on the system, the only other ratings I've seen are in the Lesh thread.

I really like the way the initial post and the thread have the same rating. Sometimes threads get super off topic but I don't think it's worth it to separate them.

I'm only going to uprate posts up that are super funny, interesting or helpful. I'm going to downrate posts that are wrong, stupid, or not funny.

A thread is a good thread or a post is a good post on NS if it gets a lot of exposure. Ratings are purely attention. A -100 rating is very similar to a 100 rating. There is nothing wrong with a down rating. A highly downrated thread is usually more entertaining than a high rated thread.

The way I see it, an uprating is always a good thing and a down rating is either a really good thing or a really bad thing. The rest is blah should stay unrated. When I rate sometime, I'm saying this deserves attention. If something doesn't deserve attention, don't rate it.

I'm worried that ratings will purely follow the bandwagon effect and will be incredibly polarized. I feel that the high profile members like eheath will have an incredible amount of ratings for every post made whether it deserves attention or not.

I'm also worried that threads with many ratings are only going to accumulate more ratings. This is actually unhelpful. There is no difference between a thread with a rating of 100 or 200, the only difference is that 100 more people agree with the first 100 people. It doesn't actually say much.

Since there are very few ratings so far, theres not too much more I can say.

If anyone has any questions or thoughts they want the testers to look into please don't hesitate to ask. This is a work in progress after all. Please be honest and don't worry about saying the wrong thing.

The more I think of it, my downrating if I don't like something while also saying that more ratings equal more attention is contradicting. Oops. Maybe I'll find a way around this. Probably not. I'll keep it on my mind.

I'm semi suspect that we may see more cases of inflammatory posts being hugely downrated.

I'd say that the real change would be if there is an affect to it. Lowering the Karma, top rated option of display, optional threading with ratings... that type of stuff.

The concept is awesome and has loads of potential to be very useful. Glad you're rolling it out now so when the updates do come in the future everyone hopefully has the hang of it.

GUI wise, I think it could use some work on the aesthetics. I liked the buttons you use for photos/videos/old system. Obviously that size wont work out, but a smaller version would be a bit more defined than just the arrows currently being used.

I also have two bugs right now:
1) First posts in a thread have weird padding, resulting in this awkward spacing 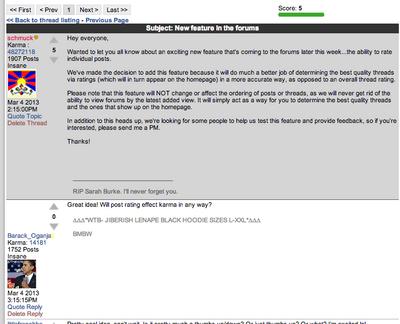 
For example, suppose we have a dinosaur roaming nsg who gets a lot of hate, some deservedly. But when aforementioned dinosaur posts something actually useful and helpful, it'll still get downvoted simply because his reputation precedes him.

This could be like a chance to karma rate someone 0/10 literally every single time they hit post.


But I still think it's a great idea overall and based on past updates, you guys are definitely in tune with what the masses want and like. So I don't doubt that 99% of the time, it'll be used properly. I just think there's the potential for abuse.
Mar 5 2013 1:24AM 9 5

Mr.Bishop
Posts: 22665 - Karma: 75,701
Karma: 75,701
Posts: 22665
@th1337
Its only launched for a few people beta testing it. You can PM schmuck and he can hook you up, or just wait for general release. We'll probably just correct a few of the bugs and push it out live. There really isn't a proper way to know how this is going to sit until its out there and we see how people use it.

This also is not yet linked to Karma. Depending on the results, we may do so in the future but currently nothing is changing.

We aren't displaying the number of up and down votes per post. This decision was made to keep the forum display as absolutely clean and simple as is possible.

Someone else mentioned that they liked the look of the other up/down arrows - and we changed it to this for simplicity. We wanted to keep the Newschoolers forums as minimalistic as is possible.

As for the forums on mobile, no they do not have ratings yet. The mobile forums work differently than the desktop version, but we intend to change this over the summer so forums will be consistent across all devices.

As for the arrows, we tested both versions and this one looked way cleaner and simpler. The other ones made the site look a touch busier which wasn't great.

I think we're going to pull the trigger on this, as there isn't any apparent bugs other than what has been corrected.

JWeinstock
Posts: 3439 - Karma: 1,352
Karma: 1,352
Posts: 3439
Addict
only been using it for a couple minutes but actually really like it. some main things:
1. Will get better threads to the home screen because they will be rated with competition to pictures because each post that is rated up will go to the overall score of the thread. Therefore, more threads will make it to the home screen.
2.Very helpful in reading through quickly. it will be much easier to skim through the thread and see the important post because of number of up/down votes.
3. It was said earlier that people like eheath would get a bunch of up votes just because it is. although this is probably true, it really shouldn't make a huge difference in thread rating as long as there is many other comments in the thread.
4. so far this is my only problem with it. If the up/down votes go to karma, the karma system will probably go crazy from anyone posts a good amount. this is kinda of confusing to explain so i will try to figure out how to say it and maybe post it later.
Overall, i like it so far
Mar 5 2013 6:57PM 5 2 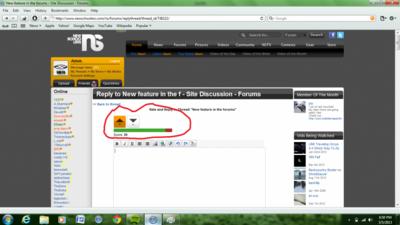 also are we just gonna use reddit lingo and call this "upvoting and downvoting"? i remember someone making a thread suggesting we think of our own term for this whenever it would come out and that time is nigh.

I personally love the addition, no longer have to read all the nonsense and can instantly get to some of the better responses. Good step in the right direction if you ask me
Mar 6 2013 3:01PM 5 7

I like the way HB does it, but their forums are pretty different so I guess it might not work as well here


I'm a little confused as to why this exists though. If it doesn't affect your karma score, doesn't change the position of your post in the thread, what's the point? If a post halfway down page 3 of a thread gets a ton of up votes will that post make the front page, the whole thread, or does that person just get to feel smug about him/herself? It's not like people will be scanning a thread just looking for up voted posts, and if they are they will kind of lose the context of said post in the grand scheme of things, no?

If someone posts a cool thread in Ski Gabber that should get on the front page easily someone could easily go and downvote every post and get a great thread a -50 rating in a few seconds.
Mar 6 2013 3:45PM 4 2

Parrish
Posts: 8695 - Karma: 1,004
Karma: 1,004
Posts: 8695
Crazy Fool
I can now upvote posts i agree with instead of posting bullshit that has already been said. As well as downvote stuff that is complete garbage without having to be that dick that chews them out.

t_rob
Posts: 6433 - Karma: 11,399
Karma: 11,399
Posts: 6433
No Life
Agreed. It's obviously supposed to be a way to point out helpful posts. However, it really doesn't make them much more visible unless it's right in front of your face. I'm against changing the order of posts and NS threads tend to evolve in the first place and downrated posts and necessarily bad.

Maybe highlight the top rated response? I actually think some people will try to find the top rated response instead of reading the whole thread although that tends to be problematic because of that whole evolution of thread thing. Who knows. I think it needs a lot more people to use the system to be fully understood.
Mar 6 2013 3:51PM 5 3
All times are Eastern (-4)