Step 2: purchase netflix if you do not already have.

Step 3: purchase EA skate (2 or 3) and Battlefield 3 if you do not already have.

Step 4: get mom to buy hot pockets and pizza pops even if she doesn't live with you.

Step 5: enjoy all activities from the comfort of your couch. Make sure you are rotating the activities though. An addiction can result in one is focused on too deeply.

Shifties4Dayz
Posts: 1657 - Karma: 550
Karma: 550
Posts: 1657
Insane
AC joint is located in the ball of your shoulder. i tore mine last year and it was by far the most paintful thing i have ever felt. over 365 days later and it still feels like shit.

the ac joint is just a tendon, and i believe the clavicle is a bone?

EvanMeyer
Posts: 3638 - Karma: 1,881
Karma: 1,881
Posts: 3638
Addict
exaggerate story of how you broke clavicle to good looking females at the bar
bang said good looking females from the bar
film it
????
profit
but in all seriousness try to just stay somewhat active if its just walking around your neighborhood or something its a big relief being able to get outside when you're injured
Feb 8 2013 4:56PM 1 0

Rajna
Posts: 3824 - Karma: 89
Karma: 89
Posts: 3824
Addict
I did too about a month ago. mine broke into 3 pieces :( i caught an edge reverting on a bump i didn't see coming. had to get 11 screws and multiple plates in order align to bone to heal properly, doctor said it was one of the worst he's ever seen. bone was basically coming out of the skin, if i pushed gently it would of came through really easily since the bone was so sharp. 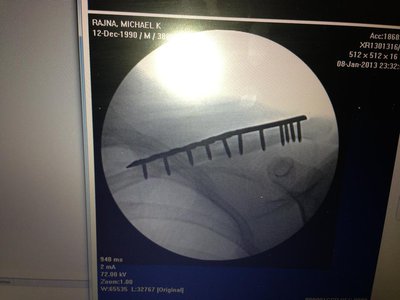 Since I've watched every episode of every season of walking dead, mad men, and currently on season 2 of boardwalk empire. Netflix is essential, you can stream it through your pc if you don't have a ps3 or xbox. I also have been spending a lot of time cooking dank shit. Video games help too.

johnnyBuz
Posts: 1438 - Karma: 1,270
Karma: 1,270
Posts: 1438
Insane
I tore my labrum and dislocated my shoulder before by a direct impact on the outside of the shoulder but on Monday I landed on the inside where the clavicle attaches to the shoulder. A bump hasn't protruded on my shoulder so it's not a grade 2 or 3 separation but it hurts like a bitch. Probably just some tissue damage.

My last couple injuries don't swell up they are just extremely painful and bruised deep inside. Sucks keeps me out for 2+ weeks at a time.
Feb 8 2013 5:48PM 0 0

Rajna
Posts: 3824 - Karma: 89
Karma: 89
Posts: 3824
Addict
Be careful how long you wear your sling too...
I've been doing some reading and there's a lot of cases of people who use slings and the weight of their arm hanging and constantly pulling on the clavicle actually bends the bone out of shape. It's recommended to only be used first 1 - 2 weeks max. I hardly wore mine at all cuz I could feel it tugging on the bone. Instead I kept my arm in the sling position across my stomach and used my arm muscles to keep it in place almost like suspension for my collarbone so it wasn't bouncing.
Feb 8 2013 5:54PM 0 0