Brentizzle
Posts: 1584 - Karma: 1,864
Karma: 1,864
Posts: 1584
Insane
Just got home from watching it. Holy fuck. shit was gnarly. wont spoil anything unless anybody else would like to share what they thought about certain parts.

The whole crowd just sat there and the entire theater was silent for a solid few seconds after the credits started.

casual
Posts: 6709 - Karma: 6,688
Karma: 6,688
Posts: 6709
No Life
It was excellent. Have you seen Brick? Same director and also starring Levitt. Highly recommend both to everyone.
Looper was a perfect blend of action/thriller and brains/artistry/quality in filmmaking. Don't feel like going into the nittygritty, but it's a really solid flick.
Oct 3 2012 1:21AM 0 0

casual
Posts: 6709 - Karma: 6,688
Karma: 6,688
Posts: 6709
No Life
don't think you'd be disappointed. Not that reviews are the be all - end all, but it's got something like a 95% on rottentomatoes which is pretty damn impressive. Definitely in my top 3 of the year. The scenes between Willis and Levitt....holy shit. The performances in general are amazing.
Warning: If you (anyone, not YOU you) are the kind of person who can't suspend disbelief and are always fault finding in logic and plot devices and whether it all "makes sense" (not in the basic, "this movie is so sloppily written and incompetently directed that it literally is idiotic, but in the deeper existential or "is this feasible" buzzkill kind of way) steer clear of it as it suffers from all of the typical issues that most time travel/parallel universe flicks have.
If you're willing to just be entertained and dig some well constructed visuals, it's a sure thing.
Oct 3 2012 3:15AM 0 0

uosdwiSrjewoH
Posts: 4220 - Karma: 119
Karma: 119
Posts: 4220
No Life
i'm saying the "average" time travel story features someone going back in time to change to future, succeeding, then learning to live in the past.

looper had you root for JGL, then loath him and root for bruce willis, then muddled it all up, back and forth until the closing minutes. sure, the terminator back in time to kill the boy plot was there, but it wasn't as straightforward.

it may have been like inception in the way that everything was spelled out the entire way, so it wasn't confusing, at least it shouldn't have been i'd hope, but it revamped the usual time travel storyline. the films you listed have certainly been well received, (though i think only 12 monkeys really is considered a true "classic" of the genre) but because looper didn't throw conventions out the window entirely doesn't make it bad, or even average. it was a good movie. it brought a lot of new concepts to revamp a tired time travel story, and while maybe not the best movie of all time, maybe not even the best of the year, it was certainly better than your average time travel film.
Oct 3 2012 11:26AM 0 0

PappaG
Posts: 931 - Karma: 797
Karma: 797
Posts: 931
Insane
SPOILERS BELOW for anyone that hasn't seen it.
I agree. Looper had potential and the first 20-30 minutes had me engaged, but ultimately, the ending was exactly like Donnie Darko. Joe has revisited the loop we see in the film many times before ... how many, we don't know. Hundreds? Thousands? He's been presented with the position to change something at the end when his older self (Bruce Willis) shoots Cid's mom which causes the downward spiral of Cid becoming evil, closing loops, and propagating the cycle to continue once again. And this cycle will forever continue until Joe intervenes and causes Cid to become good and not develop into the Rainmaker. Joe is the sacrifice to all of mankind much like Donnie Darko. If Looper was written such that Joe WAS Cid then I think we have a winner as a badass time-travel film.
If you haven't seen Primer, it is at the apex of the genre. It was written by scientists. Low budget and only 80 minutes long, but it's one of the most intelligent time travel films that exist and one that offers something most plausible. One of the writers, Shane Carruth, collaborated on Looper with Rian Johnson. It is confusing as fuck and you will likely have to watch several times before you get it, but it's an amazing movie.
Oct 3 2012 11:42AM 0 0

JAHpow
Posts: 7282 - Karma: 17,051
Karma: 17,051
Posts: 7282
Crazy Fool
I really liked how they had the ending credits come on but overall I didn't think it was that great. It got way too confusing at some points with the flash forwards. I thought was hilarious though when that chick was hacking at the stump...she was accomplishing nothing!
Oct 7 2012 4:27PM 0 0

Captain_Slow
Posts: 1677 - Karma: 24
Karma: 24
Posts: 1677
Insane
I liked it, but now that I think abt it, not staying at that farm for so long wouldve probably made it better. It would of been more interesting if something else (not sure what) happened instead of him sitting at the farm. Still good though, totally different than what I expected
Oct 7 2012 6:32PM 0 0


Here's what i would have done and what i thought the ending of the film was going to be. The entire movie Bruce Willis was focused on returning home to his wife, and would constantly check his pocket watch to make sure that the timeline still existed. He was set on killing Cid, and fixing the timeline. What i wish happened was that JGL gets to the farm where Cid lives and chills there learning that Cid is the Rainmaker. Cid DOESN'T have retarded out of control non believable powers, he's just a fucked up kid who's "mom" died and he wants to seek revenge. The farm scene lasts 20 minutes tops, not a whole hour, and we reach the last scene where they are all together trying to kill each other. Instead of JGL killing himself, Cid should have died at the hands of Bruce, who is then teleported into the future. But instead of his asian wife, he turns out to be married to the chick from the farm, who ends up passing away and Bruce is left alone to live out his life. The ending would have a fast forward again of the 30 years of JGL and Bruce's life, except this time it's a positive experience overall. A little cheesy, and maybe too happy to end on, but come on, a little kid with mutant powers that can blow people up? Why isn't he dictator of the free world then? Ughhh the ending pissed me off so much, the movie had such potential and absolutely crashed after he got to the farm.

SKI.ING
Posts: 2695 - Karma: 2,535
Karma: 2,535
Posts: 2695
Addict
Sorry, but that's a really bad alternate plot. I respect your opinion of not liking the movie, but your substitute isn't very good. And the rainmaker was working his way up there, he was closing all the loops and taking over the top crime syndicate.
I think it's unfair when moviegoers are always thinking outside the story and beyond the parameters given in the movie. Nobody is going to watch a 6 hour movie describing how the rainmaker takes over the world. You're just grasping at straws because for some reason you disliked a movie that most other people have liked.
Oct 9 2012 10:18PM 0 0

just appreciate the movie for what it was and nobody gives a single fuck about what you think should have happened.

If you took time to just watch the movie and not be thinking about alternate ending or completely different ideas the whole time maybe you would have liked it.
Oct 9 2012 11:52PM 0 0

DYFI
Posts: 3836 - Karma: 30
Karma: 30
Posts: 3836
Addict
Hey that's just a way i would have ended it, i know its probably dumb but it's in all fairness better than it turned out. We watch bruce age 30 years in 10 min, but we sit on a farm for an hour? To learn that out of nowhere (yeah we know about TK or whatever) there is a mutant kid that ends up being the over arching villain?

The movie was good don't get me wrong, the first half at least. It really did not need to super scifi mutant powered kid who blows up heads when he's upset. Stick to JGL blowing people away, not every movie needs a love scene. The movie remained very unpredictable for me, it was a time travel movie unlike i'd seen before, but it got muddled up with unnecessary additions to try and spice things up. IMO.
Oct 10 2012 9:25PM 0 0 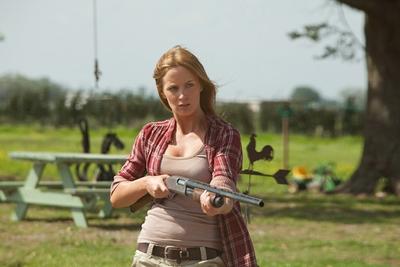