5. Okay, open up LRTimelapse, and in the right-side column navigate and find the folder that you've stored the pictures in. Click it to load it. LRTimelapse with load and ask you if you want to Initialize the XMP Metadata for the files. Click "Yes". Now LRTimelapse will create previews of each frame of the timelapse, it might take a while, so sit back or find something else to do for a little. Once it has all loaded, you want to keyframe as many photos as you want, I'd say keyframe whenever the scene changes and by default keyframe the first, last, and middle images. You can keyframe by clicking the little diamond to the left of the images in the list. Then, you'll click the "Save" button that's above the list of images in LRTimelapse. This saves the metadata so that you'll be able to edit them in Lightroom and they'll be compatible with LRTimelapse. Leave LRTimelapse open while you're in Lightroom.
6. Open Lightroom, and import the folder that you had created earlier. DON'T import from the card directly, it has to be from the same folder that the images were used in LRTimelapse. Once they are open, you'll notice that the images you keyframed all have 1 star, the rest have none. This is for easy editing, so you can click the Filter by Attribute > 1 Star in Lightroom and edit just the three images that are keyframed. However, before you do so, you'll want to do two things to EVERY image in the Develop Module. First, you're going to want to crop the image as you would like. Then, scroll down the settings in Develop mode until you find the Lens Corrections tab, and click it and select your lens. This will eliminate any warp distortion and vignetting (to a degree, but it is very good at what it does) so that the final images will look much better. Now, go back to the Library Module, and you can set the filter settings to Attribute > 1 Star. Now, go back to the Develop Module again, and proceed to edit each of the photos, you should have only about 3-6 photos that you edit here, most commonly only 3. Once you've edited each to your liking, you select all three in the bottom tray and right-click, then click Metadata > Save Metadata to Files. Leave Lightroom open.
7. Go back to LRTimelapse, click the "Reload" button that's next to the "Save" button. You'll notice that the images you originally keyframed and then edited in Lightroom will change to their recent edit. Now find the little button on the bottom that says "Auto" and looks like a curved graph. This will gradually change, more accurately, "ramp", the settings between the images that you have keyframed and edited. After you've clicked this, you'll want to check the box that says "deflicker", even if you shot in full manual and there isn't any flicker in the timelapse, it'll help smooth out the lighting and make it look really nice. This deflicker will also remove the flicker that you'll get from adjusting exposures that will have been apparent if you shot in P mode for a sunset or sunrise or light-changing shot. Once you've turned on the Auto and Deflicker buttons, you may click "Save" again.
8. Go back to Lightroom, and in the Library Module, remove the filter that was displaying only images with a 1 Star rating. Select ALL images, and right-click anywhere, go to Metadata > Read Metadata from Files. This will automatically read the ramped changes that LRTimelapse filled in for you. Wait for the images to completely load, and you'll have all of the images for the final timelapse. Go to the Slideshow Module in Lightroom, find one of the LRTimelapse presets (the video above goes over the installation of the presets, I believe, the site also mentions them), I most often use the LRTimelapse 30 frames per second preset. Then, find "Export Video", click it, make sure you're exporting in 1080p, and you can click Export. It'll take a while to export, a REALLY long time if you shot RAW, but when you're done, you'll get a nice .mp4 timelapse video!
9. Open a program like MPEG Streamclip. Drag the file into the program, change the export settings so that you're exporting to Apple ProRes 422 (Or whatever else you want, but ProRes is great for FCP and, as people are now changing over, with Premiere). Make sure all other settings are correct, quality is at 100%, etc. and export the video from MPEG Streamclip.
10. BOOM! You're done, you've got a timelapse video that's completely ready to be added and edited in a timelapse edit/montage or just as filler in any other type of video!
Extra Notes: You can also change the cropping on each keyframe in step 6 so that you add a little movement in post. I didn't do this in the example, but it is completely at your disposal if you'd like to add some movement.
I might add more extra notes if I forgot any, but that should work!
Here's my timelapse reel from this summer, it was completely done using the above method!

Alright guys! I hope this was helpful to any timelapsers out there, feel free to ask questions, I'd recommend asking any questions in the comments so that if multiple people have the same question, they can refer to that.
Thanks!
Aug 26 2012 9:26PM 5 2

I definitely have a different workflow (and I would say simpler as well), but yours is much more versatile and allows for a better end-product.

gravel
Posts: 5381 - Karma: 39,600
Karma: 39,600
Posts: 5381
No Life
not to fear!
i just checked and i still have the original .zip files from the download, i'll put them up on dropbox tomorrow so you can all access it. you'll all probably need to get a program called little snitch to prevent lrtimelapse from "calling home" and force updating the program and removing your ability to use it.
Aug 27 2012 11:52PM 0 0

steezyshit
Posts: 785 - Karma: 1,341
Karma: 1,341
Posts: 785
Ridiculous
Just to add a little to your thread : If you have a canon you can download EOS Utility and its really easier to do.
You just have to plug your camera into the computer and select the time between each shot, the number of shots you want.
After that you can open the pictures into a sequence with quicktime and then you export it where ever you want.
I've done two at the momment but my settings where very not that good.
i'll try to post one tonight
Sep 3 2012 6:27PM 0 0

i really dont like little snitch ha so i havent been using lrtimelapse.

clouds 2 from conlon kiffney on Vimeo.

clouds from conlon kiffney on Vimeo.

Sunset from conlon kiffney on Vimeo.

I_Am_Mod
Posts: 13214 - Karma: 3,736
Karma: 3,736
Posts: 13214
Crazy Fool
one small tip for OP and ppl interested, try to crop your frame to like 3/4 size and during the timelapse, pan over it from one side to the other, or slowly zoom out to full size, this takes almost nothing away from the quality (you're using pictures for frames so you have plenty of resolution) and its an easy way to put motion in your timelapse and make it more intriguing to watch !
very nice tutorial however 10/10 for the effort !
Sep 4 2012 4:23PM 0 0

I've talked to a number of people with GoPros that have had trouble figuring out how to make timelapses, so I thought I'd add a little something on that process to this thread.
This is for Hero 1 and 2 (I haven't ever used any other GoPros so I'm not sure if they're any different) and uses Quicktime. I have a fairly old Quicktime (7.7) so this will work with anything after that too and probably versions before as well.
All the stuff that the OP said about actual shot composure still applies here as well.

1. Go into your GoPro's settings and select 2, 5, or 10 second modes. (30 and 60 second modes are pretty long for clouds or other usual timelapse subjects.) 2 second mode is good for a shorter timelapse where you want to capture the movement of a group of clouds across the frame. 5 and 10 are good for longer ones like sunsets.

2. Leave the settings mode and go into Timelapse mode.

4. Import your pictures into one folder. Make sure you don't have any other pictures or videos in it, only pictures for your timelapse. If you have more than 10,000 pictures, your GoPro will start over at the beginning when it names them. This can be an issue if your 10,000th GoPro file is in the middle of your timelapse, because when you move the files onto your computer, they will be out of chronologic order. If this happens, do the following steps with each of the sets of photos (the ones before 10,000 and the ones after).

5. Once your folder of pictures is set, open Quicktime. Go to file and select Open Image Sequence 6. Find your folder and click on it. Then click on any of the pictures in it to select that folder. 7. Quicktime will ask you to choose a frame rate. Remember, standard playback for video is generally either 24 or 30fps. Choose 60fps if you shot in 2 second mode for a long time. 8. The video will be shown in actual size. 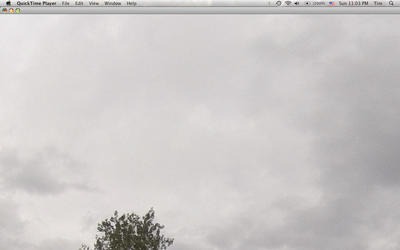 To see the whole thing, I usually hit Command 3 (you can get their from the view tab also.) 9. When you're happy with you're timelapse (you can go back and switch frame rates if you don't like how the initial one looks), hit export. 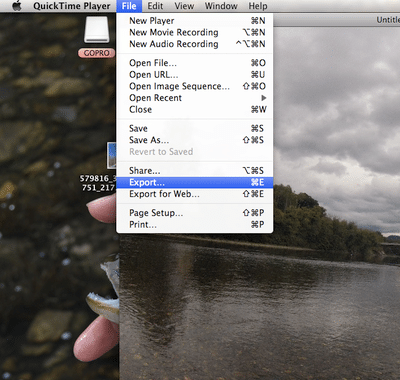 10. You'll get this window where you select your destination, video type, and settings. 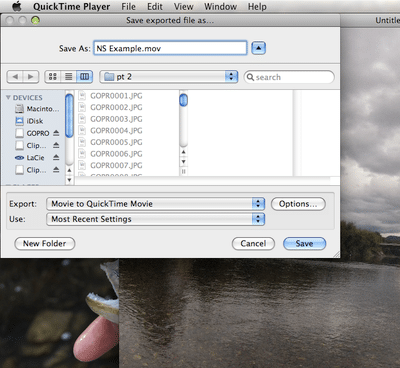 11. Hit options. You'll get this window: 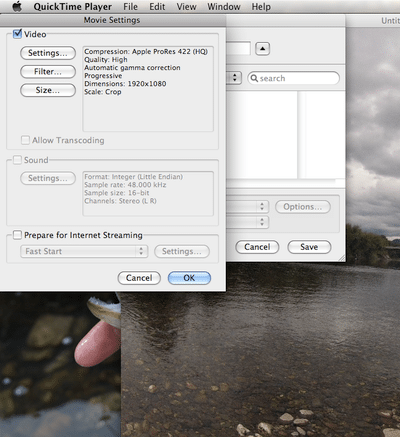 12. Since I edit with FCP, I export the video with the codec that matches it so I won't need to conform or render it later. Hit Settings to change the codec Make sure you change the size to fit what you're editing with also. If I'm not sure, I use 1080 because then if I need to resize it fit with different shots it won't be letterboxed.

11. Unless you have a good reason to do otherwise, leave the Use as Quicktime movie 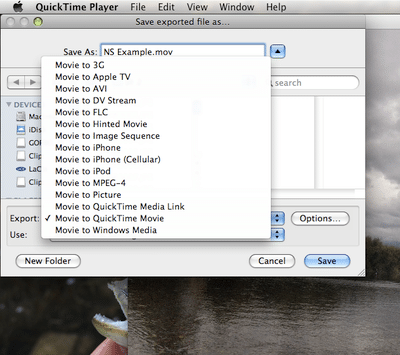 link if that doesn't work: http://www.youtube.com/watch?v=s2jjDd42Djo

While GoPro timelapses aren't going to look anywhere near as good as ones from a DSLR, they are super easy and can be great incorporate into your edit. Good luck and have fun.
Sep 24 2012 3:27PM 0 0

gravel
Posts: 5381 - Karma: 39,600
Karma: 39,600
Posts: 5381
No Life
Thanks for this, but I wanted to stay away from simply compiling images for the timelapses. If you notice, the Lightroom method gives incredible editing power and you can keyframe and deflicker for changes in the scene. The output images from the LRTimelapse are vastly better looking than simply compiling the images. Great solution though if you're looking for a fast, easy timelapse and you don't care much about how well edited it is.
Sep 24 2012 9:32PM 0 0

.qzyxya
Posts: 1479 - Karma: -26
Karma: -26
Posts: 1479
Insane
Is there a way to do this inside of ae or premiere? I've tried just manually sequencing all of the files in after effects, which works if its only a couple of seconds long, but you can't change the frame rate or speed or anything later, and its really tedious.
Does that quicktime player method work on windows?
Dec 13 2012 7:31PM 0 0