discuss.
want to get some ns opinions, because everyone here knows about the views ns has on just about everything. hahaha
inb4 religious shitstorm
Jan 11 2012 8:33PM 0 0

Jibbidy
Posts: 787 - Karma: 19
Karma: 19
Posts: 787
Ridiculous
I hate these threads, because nobody is gonna convert any which way because of a religious argument on Newschoolers. Regardless, here's some yummy Richard Dawkins quotes to stir the pot a little: LOVE this one: If people think God is interesting, the onus is on them to show that there is anything there to talk about. Otherwise they should just shut up about it. -- Richard Dawkins In fairness, most of NS is undereducated until they grow older, but: You cannot be both sane and well educated and disbelieve in evolution. The evidence is so strong that any sane, educated person has got to believe in evolution. -- Richard Dawkins And for you "JUST A THEORY" boneheads.... People sometimes try to score debating points by saying, "Evolution is only a theory." That is correct, but it's important to understand what that means. It is also only a theory that the world goes round the Sun -- it's just a theory for which there is an immense amount of evidence.      There are many scientific theories that are in doubt. Even within evolution, there is some room for controversy. But that we are cousins of apes and jackals and starfish, let's say, that is a fact in the ordinary sense of the word. -- Richard Dawkins, "Nick Pollard interviews Richard Dawkins" (Damars: 1999) I'll now attempt to leave this thread forever.
Jan 12 2012 2:30AM 0 0

*DELETED*
Posts: 1043 - Karma: 938
Karma: 938
Posts: 1043
Insane
finally... seems like everyone who is saying religion cant be true uses evolution as their basis. seriously, whether you are deist, strongly religious, agnostic, or complete atheist, have respect and tolerance for others beliefs. /thread
Jan 12 2012 3:06PM 0 0

rach
Posts: 917 - Karma: 507
Karma: 507
Posts: 917
Insane
filmed outside of my highschool, claim/
but its intriguing I guess. He makes some really interesting points but some of them are a bit contradictory. Its also a lot of information flying at you at once and so its easy to overlook some of the broad generalizations he moves towards...idk. idk.
Jan 13 2012 1:49AM 0 0

Pink.Floyd
Posts: 54 - Karma: 16
Karma: 16
Posts: 54
Wannabe
I'm in no way forcing Christianity upon y'all... Just going to try to explain his video some. He's saying religion in general is crazy. Example: the crazy stereotypical Christians you see on tv that are really condemning. What this guy is saying, is that a relationship with Jesus is so more than rules and condemnation. It's a relationship built by a loving Savior that promises a better life (John 10:10). When I say "I'm a Christian", it doesn't mean I think I'm better than anyone else, or perfect for that matter. It just means I believe that Jesus loves me unconditionally, and chose me even though I am so messed up. In the end though, Jesus didn't come to establish a religion... He came to establish a kingdom and bring His beloved children home. I am in no way trying to sound pretentious, just trying to shed some light on the topic. I hope this helps to explain a little :)
Jan 13 2012 1:57AM 0 0 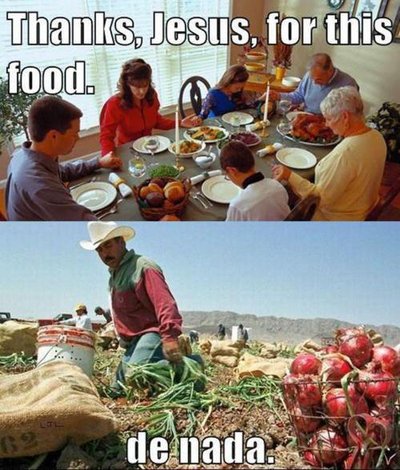 day10
Posts: 11552 - Karma: 2,540
Karma: 2,540
Posts: 11552
Crazy Fool
my question is how do you pick and choose the parts of religion you like and ignore the ones you don't and not feel like you're completely bullshitting everything? The. bible says a shit ton of stuff. how come so many people just ignore the parts they dont like or want to have to deal with, and then base their lives off the parts they like?
Jan 13 2012 6:59AM 0 0

Pink.Floyd
Posts: 54 - Karma: 16
Karma: 16
Posts: 54
Wannabe
That's a very good question, and actually really true for a lot of Christians in the world. What it comes down to is a person's personal relationship with Jesus. Choosing to follow Jesus is ultimately the toughest thing you could ever decide to do because it does require choosing a different lifestyle. The Bible calls us to be different, and if you choose to follow Him you will have to be different from today's norm. It's difficult yes, but in the end it is so worth it. People going around picking and choosing what parts they like and don't like is hypocritical and ultimately leads people away from Jesus. This is heartbreaking to me. It is understandable when a person sins... no one is perfect and we all sin. Jesus died so we could be free of that sin and not have to carry those burdens with us. It was out of love. How you take this amazing gift really makes an impact on how you take the Bible and it's teachings. Many see it as a get out of jail free card and continue to live their lives the way they want to. I personally could not see myself living a life opposite of Jesus's teachings. I've learned through the years that I am not smarter than God, and what ever is in the Bible is there for a reason. Ultimately, that reason is love and wanting us to live free and joyous lives. I hope this has answered your question. I'm sorry if it's a little hazy at points, it's difficult to explain this over a keyboard. If you have anymore questions feel free to ask.
Jan 13 2012 11:41AM 0 0

Phormat
Posts: 774 - Karma: 20
Karma: 20
Posts: 774
Ridiculous
Religion is a crutch to fall on.
It removes responsibility from oneself and moves it to a higher power (on both ends God and Satan). I actually think that believing something other than the good within yourself is selfish and weak.
You can sin and be forgiven, God moves in mysterious ways, it's the work of the Devil, life after death, a second chance, a better place etc. etc..
The world is fair as it stands without God, math and science pretty much dictate what happens, and what we don't know, we figure out with logic, not psychobabble.
My sister and her husband WERE (thank GOD (oh, the irony)) devout Pentacostals (crazy Christians that "spoke in tongues" (bullshit because the pastor's wife would speak in the same weird shit (claiming not to understand what it meant) EVERY TIME, they didn't like it when I called them out)).
I talked to them at depth on my views on how good can be innate without the need for a personal god. Things can feel right or wrong without a belief in religion. All they said is that they "need" to believe in something. I respected that to an extent, but it seems to me that is a form of weakness or inability to cope with the unknown or the uncontrollable. Granted we all share these feelings, but some of us would rather choose to find the answer through possible means (*cough* science), rather than being lazy, pretending, and coming up with an answer with no solid proof or evidence. That is LYING to yourself. That is a false Prophet. The hypocrisy of it all is staggering.
Believing in a "personal" God is silly. What if my God told me I'm better than you? What if he told me to kill those I believe have sinned? If a God is to exist, he has to for all people under the same conditions, otherwise my God is better than yours.
God-Devil = Positive-Negative, Enthalpy-Entropy, Yin-Yang, Matter-Antimatter. The universe has opposites or it wouldn't exist. But those opposites aren't fairy tale characters. Good would never exist without Evil, because you wouldn't be able to tell one from the other if the other did not exist. So will God defeat Satan in Revelations? Nope, they need each other. Revelation is the likely the universe crunching back together in a singularity. Back to square one. Logical. Cyclical.
God being an Alien that intervened in our evolution makes more sense than some ethereal being caring about what little ants on a speck of dust in the universe quarrel over. "He" knows how everything will turn out in the end so why bother "creating" in the first place? Dust to dust, ash to ash.
I have faith in logic, the inherent "good" in humanity, and science. Love still exists but not necessarily a "God".
- whew....
Jan 13 2012 2:21PM 0 0

Phormat
Posts: 774 - Karma: 20
Karma: 20
Posts: 774
Ridiculous
^ And by religion I meant mainly Christianity, Islam, Judaism. Some other religions are more like philosophies and don't comment on the destination of your "soul" or threaten you and others with eternal damnation.
Jan 13 2012 2:33PM 0 0

TOAST.
Posts: 5657 - Karma: 10,227
Karma: 10,227
Posts: 5657
No Life
Arnt all religions based off of what a person believed. Just because you dont follow everything exactly doesnt mean you arnt of a religion. Religion doesnt really need a name. If you believe something that is what you believe, you dont need a name for it.

And I love all of his focus on Jesus, instead of the overall God. Does that not make Jesus an Idol, since he was Gods son, but not God? And if you believe Jesus was God in human form, than in the end, it wasnt what jesus did, but what God did through him, therefore the attention shouldnt be focused on jesus, the materialistic version, but all on God in general.
Jan 15 2012 12:10PM 0 0

Phormat
Posts: 774 - Karma: 20
Karma: 20
Posts: 774
Ridiculous
Well I didn't think it was a waste, it is always beneficial to organize your thoughts in writing. Sure religion is spawned out of a need to understand nature. Clearly you missed the point that science provides the explanation, or at least provides logical means to attempt finding answers.
You did little to provide any meaningful criticism or retort.

mseward
Posts: 1041 - Karma: 1,235
Karma: 1,235
Posts: 1041
Insane
could you be any more ignorant? I mean seriously it's great that you have an opinion, everyones entitled to one. But to be so degrading of someone elses opinion is just not cool. What happened to the common respect on NS? I mean we're all skiiers here and thats all that should matter but adressing the ALL of the religious portion of this communtity that way is just not cool.