Obama to approve indefinite detention and torture of Americans 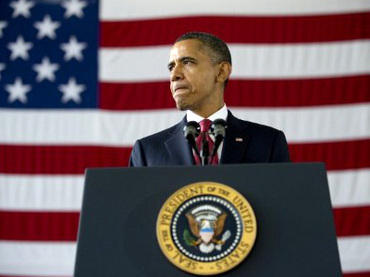 Less than a month after he threatened to veto terrifying legislation that would cease constitutional rights as we know it, Obama has revoked his warning and plans to authorize a bill allowing indefinite detention and torture of Americans.

After passing in the House of Representatives earlier this year, the National Defense Authorization Act for Fiscal Year 2012 went before the US Senate last week, where it was met with overwhelming approval. In the days before, the Obama administration issued a policy statement on November 17 saying explicitly that the president would veto the bill, as it would challenge “the president’s critical authorities to collect intelligence incapacitate dangerous terrorists and protect the nation.”

Opposition from the White House seemed all but rampant until RT revealed earlier this week that Senator Carl Levin told lawmakers that the legislation was altered because “the administration asked us to remove the language which says that US citizens and lawful residents would not be subject to this section.”

On Wednesday, White House Press Secretary Jay Carney said that those last minute changes yielded legislation that would “not challenge the president’s ability to collect intelligence, incapacitate dangerous terrorists and protect the American people,” and therefore “the president’s senior advisers will not recommend a veto.”

Originally the White House said that the administration objected to matters in the bill that applied to detainees. Under the act, Americans could be arrested and held indefinitely in military-run prisons and tortured without charges ever being brought forth, essentially making Guantanamo Bay a threat for every American citizen.

Under the legislation, a literal police state will be installed over the United States. Republican Congressman Ron Paul said earlier this week that “this should be the biggest news going right now,” as the legislation would allow mean “literally legalizing martial law.”

“This step where they can literally arrest American citizens and put them away without trial….is arrogant and bold and dangerous,” said the congressman and potential Republican Party nominee for president.

In its threat of a veto last month, the White House said it had similar sentiments, writing in an official statement from Washington that “The Administration strongly objects to the military custody provision of section 1032, which would appear to mandate military custody for a certain class of terrorism suspects.”

“This unnecessary, untested and legally controversial restriction of the President's authority to defend the Nation from terrorist threats would tie the hands of our intelligence and law enforcement professionals,” added the White House. “Moreover, applying this military custody requirement to individuals inside the United States, as some Members of Congress have suggested is their intention, would raise serious and unsettled legal questions and would be inconsistent with the fundamental American principle that our military does not patrol our streets.”

Despite Obama’s promise from last month, a veto seemed questionable after it was revealed that the bill, which approves the budget for the Department of Defense, came at a price tag much lower than the president had asked for.
It is expected to be in Obama’s hands anytime this week.

PhaedeD
Posts: 11496 - Karma: 313
Karma: 313
Posts: 11496
Crazy Fool
a lot of people will bring section 1037 of this bill up and say that because it says that the military detainment is not allowed to happen to us citizens means it wont happen... thats bullshit its the government, if they say you are part of a terrorist organization or you give terrorists info, well you do no matter what you or anyone else says. If uncle Sam says you did it you fucking did bro. im drunk right now sorry. also the government is about to try and shutdown a bunch of small business by making them pay what they owe on their line of credit if their line of credit is under 100 grand by december 31st. this will put a bunch of small business owners in major binds. i dont know everything about this exactly im sure someone else can chime in that knows more about this.
Dec 14 2011 9:43PM 0 0

wasatch_rat
Posts: 1703 - Karma: 2,209
Karma: 2,209
Posts: 1703
Insane
dude theres not even any academically recognized definition of terrorism. this grants the president the power to arbitrarily detain us citizens on us soil without any trial for however long he wants. if you think there are stringent binds on what can be justified as a suspected terrorist you are completely wrong. this is downright un american and goes against the constitution and the very ideology of a liberal representative government consisting of FREE citizens.
Dec 14 2011 9:51PM 0 0

derbski
Posts: 3173 - Karma: 58
Karma: 58
Posts: 3173
Addict
I am losing faith in NS when people make posts in threads acknowledging that they didnt read the topic at all, but that a huge argument is gunna happen. Really? did anything constructive come out of your warnings of an impending "political shit storm"?
Anyways, while I don't like the fact that this bill will give the president power to detain americans suspected of terrorism indefinitely, you are crazy if you think that they wouldn't have done it anyways before. If you were suspected of terrorism and the government thought they could get information out of you, they could make you disappear without a problem and detain you without anybody knowing.
It is just like torture at gitmo. Just because Obama signed something saying that they will not use waterboarding and other techniques that were considered borderline-torture, doesnt mean that they will never use those kinds of techniques again. If the government knew that another 9-11 was coming, and they knew that somebody they had in custody could have information to prevent that attack, you better believe that there would be some off-the-books torture. Some of the most excruciating or mentally damaging torture techniques leave no evidence, such as tickle-torture (sounds not that bad, but remember getting pinned and tickled as a kid and how much it sucked after like 30 seconds, imagine that for hours), chinese water torture, keeping them awake and blasting music or glass shattering or babies crying every time they doze off, or pumping them full of scary hallucinogenic drugs.
Bottom line, if the government has to torture somebody, they will whether or not it is legal
Dec 15 2011 7:08AM 0 0

jamers
Posts: 1311 - Karma: 162
Karma: 162
Posts: 1311
Insane
Terrorists do not deserve protection under the constitution, regardless of whether they are US citizens or not. They should be treated as scum because thats exactly what they are.

feihlination
Posts: 8356 - Karma: 1,084
Karma: 1,084
Posts: 8356
Crazy Fool
right, different context but i had a convo with a member of a semi-special forces thingy here in austria and part of his job is to transport detainees to court hearings, suspects to police questionings and one special occasions, like when they need a special medical treatment and stuff.

and he said that their squad and an even more famous special unit do "a little extra" when they deal with pedophiles and stuff.

so i would think that its no different for terrorists, no matter how developed the country is. it shouldnt happen, but i fail to feel sorry for them. only problem is when someone gets accused wrongly for me.
Dec 15 2011 9:20AM 0 0

las.
Posts: 1959 - Karma: 1,455
Karma: 1,455
Posts: 1959
Insane
You obviously have no idea what the word Terrorist will encompass when this gets passed. Read up on this subject before you go and stay stupid shit like that.

Did you know in the US you can now technically be suspected of terrorism if you have more than a weeks worth of food in your home?
Dec 15 2011 6:51PM 0 0

las.
Posts: 1959 - Karma: 1,455
Karma: 1,455
Posts: 1959
Insane
I know they wont, I live on the other side of the world. I mainly made this thread because this entire thing makes me lol, and your president cant keep his word on anything, which also makes me lol. You're also an idiot if you think this is irrelevant to you. This will affect you directly or indirectly one way or another.
Dec 15 2011 7:04PM 0 0

PhaedeD
Posts: 11496 - Karma: 313
Karma: 313
Posts: 11496
Crazy Fool
maybe someday when the government is more corrupt than it already is you will really want to speak out, real knowledge not this 99% occupy shit. when you try and do that guess what, YOU will be considered a terrorist.

you seem to understand what is going on here. think deeply into why this is a bad idea, just think, use your imagination if you have one. 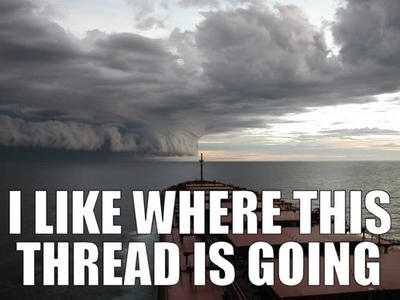 derbski
Posts: 3173 - Karma: 58
Karma: 58
Posts: 3173
Addict
Honestly? you couldnt even put a buffer sentence between "get informed before you speak" and "outrageously untrue statement that I never read anywhere?"
I heard that you can be considered a terrorist if you have ever told the middle eastern guy at the 7-11 to keep the change
Dec 17 2011 2:36AM 0 0

TaySwift
Posts: 3436 - Karma: 1,620
Karma: 1,620
Posts: 3436
Addict
i don't know how this affects anyone that isn't a terrorist, so guantonamoa bay is shitty, those terririzing bastards deserve to be in there. except omar qatar, the american government should have every right to kick the shit out of them. Us Canadians are too nice to do shit like that, our torture camps after ww2 for nazi's were making them watch videos of what happened to jews in the holocaust #coolstorybro, k thanks bai
tayswift
Dec 17 2011 2:48AM 0 0

XtRemE11
Posts: 5640 - Karma: 405
Karma: 405
Posts: 5640
No Life
on my way to the airport i pulled off the side of the road to go through my shit and find out what airline i was on. and this airport cop guy pulled up behind me, started yelling at me about how im endangering the airport, im a suspected terrorist, blah blah blah, then started screaming/asking, are you a terrorist!? i said no, he had to ask and i had to answer like 3 times. then i told him i was looking for my airline info, then he gave me a ticket, said if i speed or do anything wrong he's "detaining" me.
anyway, fuck that guy, i hope he suffers a long and painful death soon.
but yeah just shows who the authorities can consider a terrorist if they feel like it.
Dec 17 2011 3:43AM 0 0

XtRemE11
Posts: 5640 - Karma: 405
Karma: 405
Posts: 5640
No Life
just saying that if one cop could consider me a terrorist in his mind, and even threaten to detain me for it. if it become more "acceptable" to accuse people of terrorism, which would happen if this is approved. things would obviously be going in a bad direction. if you give the government any power over citizens, its a guarantee that the power will be abused.
its just more power to the government, less to the people. it makes us more scared of the government, and the government less scared of us. all of which is the exact opposite of how it should be. this whole thing is a retarded fuck ass idea.
Dec 17 2011 4:45AM 0 0

Don't write off what someone says just because you've never heard/read about it before. A quick google search would have given you the answers you need.
Dec 17 2011 8:40PM 0 0

oh, and HOPE and CHANGE

PhaedeD
Posts: 11496 - Karma: 313
Karma: 313
Posts: 11496
Crazy Fool
inb4 4chan takes over ns with all this fucking meme bullshit or whatever the fuck all this inb4 and OP shit is and ohh inb4 shut the fuck up look at your stupid fucking post that does nothing but raises your post count and just makes me fucking stupider fucking christ.
Dec 17 2011 9:38PM 0 0
All times are Eastern (-4)