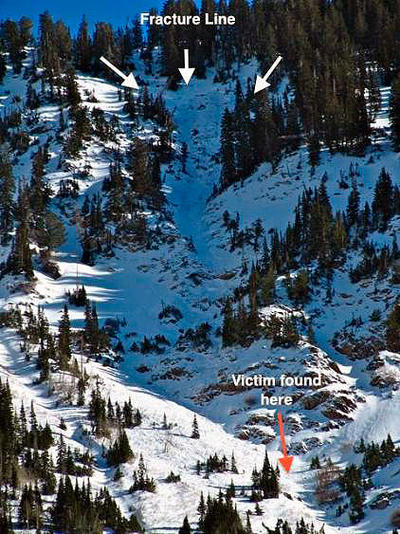 notimportant44
Posts: 64
Karma: 535
Posts: 64
Wannabe
avy rating the day of was considerable/high, he had no gear (i understand it wouldnt have helped but if you're going into the backcountry you should be prepared), he even started a big slide on the way up and still chose to ride a 40 degree slope despite first hand knowledge of the conditions. his poor choices have left behind a wife and 2 kids who are now going to grow up without a father. it is a complete tragedy that he has died, but this could have been prevented so easily with a little forethought. regardless, RIP to one of the gnarliest huckers around.
Nov 15 2011 12:19AM

forrest-cole
Posts: 1135
Karma: 41095
Posts: 1135
Insane
I'd like to know what was on his mind seeing that first big slide and moving on liking nothing, especially with out avy gear. Maybe he was just feeling to comfortable in the early season or what, but either way we can all agree this is horribly tragic. Jamie was definitely a legend to me and will be greatly missed by everyone, as well as all the other great skiers.

Be safe in the back country this year, for whoever is into getting out a lot. It definitely could be a really scetchy year for most of these western states, so keep it chill when you need too! One of the biggest things is being able to turn back whether it's the worst day, or the best day of your life, cause that could be your last.

saw him hiking up to that run from alta. i am wondering what they snowboarded to get to the cirque? it would have been northwest facing most likely.... either the keyhole or baldy.

maybe because they had already successfully rode a NW face they thought that they could ride another one and dismissed the cirque slide on the fact that that is east facing. either way never good when someone dies.
Nov 15 2011 10:45AM

A viddy from alta that day

be safe and educated

try not to let moth

er nature bitch slap you cause she will

I definitely don't agree with his decision making that day, and hope his passing will serve as a wake up call to those risking it everyday.

montanan
Posts: 1779
Karma: 40010
Posts: 1779
Insane
good decision / bad decision , i dont care fucking RIP .. the guy was an amazing talented skiier and probly had seen and witnessed much gnarlier things than that on a first hand basis, and still chose to ride. this guy has been a pro for as long as some members on this site have been alive. im not saying go do dangerous stuff in the backcountry with no gear, especially after witnessing an avalanche but, , i just dont want to remember jamie like that. if someone asked me what happened id say he died skiing , in an avalanche doing what he loved the most in life. even after he saw an avalanche. i will remember him for the true og he is, not for making one bad decision that day..just my opinion,. . RIP jamie it was an honor to watch you ride growing up. he was truly an idol for me and my friends growing up.
Nov 16 2011 2:26PM

dylhole
Posts: 2924
Karma: 218148
Posts: 2924
Addict
Agreed.  Everyone who puts in a lot of days in the backcountry has their sketchy moments.  Just sucks his turned out as horrendously as it did.  I was always stoked running into Jamie in the backcountry, always a smile ear to ear, just stoked to be out in the powder.  Thats exactly how I'll remember him.
Nov 16 2011 8:35PM

steezeeepolizeee
Posts: 8757
Karma: 234065
Posts: 8757
Crazy Fool
RIP jamie
There were a lot of ppl out that day taking risks that they really shouldn't have that in 20 20 hindsight  I wouldn't have caught myself ever on. Those early season pow turns can be tempting but keep your head on straight when your out there. Even from the pictures you could tell that stability was questionable at best

TM_LoCo
Posts: 46
Karma: 2080
Posts: 46
Lame
Jamie would come and teach classes up here at the resort i work at in the winter with his wife and daughter or daughters im not sure how much he had, but he will be very missed. i hope the family is doing well. RIP Jamie Pierre you were a BEAST, highlight of my year meeting you last year

YoungJah
Posts: 1106
Karma: 54456
Posts: 1106
Insane
I have no first hand knowledge of the utah snowpack, or the topography of the accident sight. But here are some of my thoughts?

-If a slide was to a occur, higher consequences of serious injury, or in this case death.

-Lured into a false sense of security?

Whatever their thoughts were for that day, it's still a tragic loss.

penguiin
Posts: 1443
Karma: 37630
Posts: 1443
Insane
you might not get buried as easily but that means you are more prone to hitting rocks and trees which will kill you just as easily as getting buried. i dont think it was a false sense of security since he knew that there were warnings for avalanches that day and the fact that he already caused a pretty big slide earlier that day. it sure as hell wasnt peer pressure, he is fuckin jamie Pierre who jumped off a 250 ft cliff, no pressure needed to make some simple pow runs.

i dont think anybody will know there thoughts, all we know is that we lost a legend but all we can hope for is that his life and even his death made a positive impact on many people.

First off, RIP Jamie Pierre. He was a great skier and seemed to be a great guy. I saw him skiing at the Bird quite a lot and from the few times I spoke with him, he impressed me with genuineness.

That being said, the above link is a good write up about Jamie's death and the consequences of bad decision making in the backcountry. Even though a beacon/shovel/probe wouldn't have changed the outcome, it goes to show he was not thinking that day when he went up. Even on low danger day you should never ski in the backcountry without proper gear.

As they were hiking up their group set off a large avalanche. There were warning signs all around and he didn't pay attention. He definitely should not have been skiing the terrain that he skied that day. Avalanches do care if you are a legendary skier or not. If you make stupid decisions in the backcountry you will pay for it.

I see threads on here all the time from people that are coming out west on a vacation and want to head to the backcountry. They always ask, "Where should I go?" ;"Can I rent/borrow avy gear?"; "I just want to build a jump in Grizzly Gulch, I don't need a beacon do I?"  I'm blown away that people think they can just go into the backcountry with avy gear and feel safe. First you need to know how to use the gear otherwise the only good a beacon does is helping to excavate the body. You don't only need to know how to use a beacon, you need to know how to use it well. Also, you may be confident using a beacon, but if the guys you go with are not, you will be the one that will die in a slide. You also need to understand  avy prone terrain and avy prone snow. Terrain traps, rollovers, graupel, etc.

Sorry to puke my thoughts, but it needs to be said. The backcountry is much more dangerous than the ski community makes it out to be. Case and point, I was called today to go ski Wolverine Cirque (http://http://www.summitpost.org/wolverine-cirque/263058 ) in the Alta backcountry tomorrow. We are supposed to get 18" or so tonight. I'm not going, It's a stupid idea right now. I told him that, I hope they don't die tomorrow.

Moral of the story, don't be stupid. No one wants you to die. End Rant.

Loco-Deer-Slayer
Posts: 1388
Karma: 66791
Posts: 1388
Insane
shallow snowpacks actually produce some of the worst avalanche conditions. (shallow snowpack based off of ground = steep temp gradient = snow crystals metamorphosing to a faceted layer) ie: this is what caused the slide
Nov 19 2011 10:01AM

been there done that got the coreshots 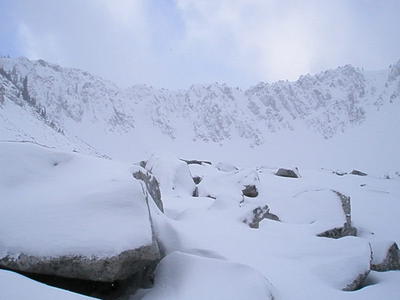 hope if i ever pass my "freinds" don't monday morning arm chair qb my death on underground self pimpin google add makin sad mother fuckin shit fore my body is even in the ground.

What a "Friend" i hope you use that google add $$$ to buy a clue or donte to his fam.

for a hell of a skier and a solid dude

reguardless of whether he understood snow stability

danbrown
Posts: 10940
Karma: 262021
Posts: 10940
Crazy Fool
A monday morning armchair quarterback refers to a qb who has a shitty game sunday, then sits around talking about what he couldve done better and what he did wrong. hindsight is always 20/20

He said that if he ever passes (dies), he hopes his so-called friends dont sit around talking about what he did wrong on that corporate advertisement sellout website before his body is even buried.