The Jiaozhou Bay bridge is 26 miles (42 kilometers) long and links China's eastern port city of Qingdao to the island of Huangdao.

CCTV says the bridge passed construction appraisals on Monday and the bridge and an undersea tunnel opened to traffic on Thursday.

The bridge supported by more than 5,000 pillars was built in four years.

Guinness World Records says the previous record holder for a bridge over water is the Lake Pontchartrain Causeway in Louisiana. The Chinese bridge is more than 2.5 miles (4 kilometers) longer. 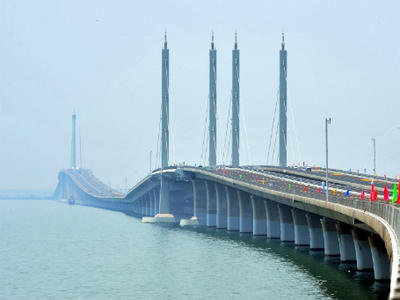 “It is a magnificent and very advanced bridge,” Li Qun, the local Communist party secretary, said at the bridge's opening ceremony, according to the Telegraph. “It is another stepping stone in the city's smooth and rapid development.”


For that cost, the Jiaozhou Bay bridge is seriously sturdy. The Guinness Book of World Records announced that "the earthquake- and typhoon-proof bridge ... is designed to withstand the impact of a 300,000-ton vessel."

Although the bridge will be free to use for the next month, government officials indicated that they plan to eventually charge a toll of 50 yuan ($7.70). The bridge has six lanes, is about 110 feet wide, and officials estimate that it will halve the journey from Qingdao to Huangdao to about 30 minutes. 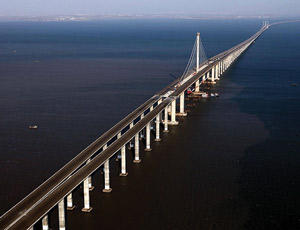 The Jiaozhou Bay bridge is the sixth longest bridge ever built, and breaks the record for world's longest over-water bridge by more than 2.5 miles, beating the United States' Lake Pontchartrain Causeway in Louisiana.


Eleven of the world's 15 longest bridges are located in China.