DrZoidberg
Posts: 5457 - Karma: 2,791
Karma: 2,791
Posts: 5457
No Life
I finally decided it was time to swap out my pole grips for something better. Basically I took some grips off an old pogo stick, did a bit of taping and used some epoxy and it looks pretty good. Here's some pictures with explanations. If you take away one thing from this, make sure everything is ready for epoxying before you start, I had 5 minute stuff, and I only cut up one grip, and so I had to cut the second while this stuff sat hardening in the applicator.

Since the grip was slightly wider than the pole, I used a bit of tape to increase the shaft's diameter. It's just plain making tape. I put enough on so that the grip had to be forced on and off, and was snug when on the pole. The difference was small though, not so sure how it work would for much larger diameters. I was thinking, if you took masking tape and saturated it with glue then it might harden and work better?

Then I cut some material out of the grip to accommodate the pole strap.

Then I put a screw through the top and strap. If you put the strap into the slot you made, then put the grip on the pole the strap should be held in place allowing you to get the screw through it. This was later filled with epoxy, I used loc-tite self mixing stuff. It mixes in the syringe and is easy to apply to small spaces like the inside of the grip. That should help stabilize the screw, hold the strap in and keep the grip on the pole. 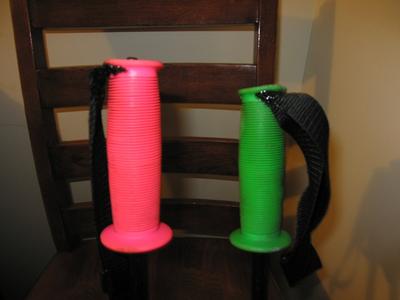 The final product, neon is still cool right? The strap is more secure than it looks, I just tugged on it. There's a ton of epoxy holding it in on the inside. I'm probably gonna add a layer of epoxy to the bottom to prevent water and such from getting in.