If you were to bring a ski back into production,

here's a general round up, don't get too tearful, but, to be real, it is hard to hold back the tears typing this up. let's reminisce

1) BLUE pocket rockets
2) Those old motherships with the bikini/boomobox chic i believe
3) The candides, atomic?
4) The first, the salomon teneighties
5) ar5
6) OG Seth Pistols (Piss yellow, 93 at the waist, the sequel to the PRs, when huckin fullspeed 100ft backflips was only Shane, and, bare in mind, Rory Silva was rockin these at Superpark with the illest array of stickers, read that shit on Freeze)
7) the spats, i actually had a pair, and, once i get filthy rich, will get another, to put on my wall, and maybe another, to ride, and then another, to flip my eggs in the morning, but there were only 1000 made i think)
8)line 1260s (the orange ninja ones were the bomb, so were the red ones the following year, i dont remember the year before that, but, i had a pair, and the name was a complete one-up of Salomon's line)
9)line invaders (only because everybody loves them, i'm not putting the anthems on this list, one dude already posted way too much about them) (zebra ones, much nicer looking)
10)OG line chronics
11)David Chricton's Troublemakers, green and mean
12)Rossi Pow'Airs - if you didn't play Moseley's Mad Trix, you should, bc they dont center mount the skis, and it looks very funny
13)Rossi Scratch FS's, i would say the BC's, but it took Rossi so long to push the waist of those skis beyond 88, id rather give respect to the companies that weren't so conservative in the powder movement)
14)original T-Halls with the black/white bases and factory detuned edges at the center, we all want detune back for our park skis
15)OG Bacons, but i can't even remember what they look like. if somebody has a pic of them, put them up
16)Salomon CR Pro Models, because the Camo was SICK
17) whatever the first Volkl twintips were, with the meditating dude and the half tipped tail, they sucked so much i just wanted to see what they were like
18)oops, forgot, props to Pep when he boosted the quarterpipe onto the deck back on the K2 Enemies, they had the black bases with a lil white design, then next year went crazy red white and blue
19) line dogans (or skogan's? i dunno)
20) line dragons
21) ghetto blasters
22) salomon 720s
23) salomon 540s
25) Head MAD TRIX (wow that took a while to remember)
26) didn't volant have twin tips, the 66s?

the ski was marketed at a primarily powder hungry ski....wow we've come along way from 97mm waist powder skis

And the last year of the 1260 (05's with the ninja's) was my first park ski, I would love to find another longer pair of those, they were ill.

and everyone saying the scratch fs, you know that the s4 is the same ski right? They haven't changed that shit since like 06 because it is so good. Unless you are talking about the OG ones that were like pea soup green and then the blue and maroon ones, those were ill.
Jul 31 2010 5:42PM 0 0

My vote would go to these two skis though:

and my favorite elizabeths 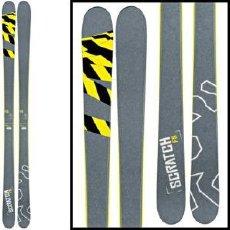