Ive heard so many different reports oh snow in vt, nh, and me. I finish my last college final tomorrow and want to ski somewhere to celebrate. I know sugarloaf and Jay are both open and predicting "pow day" for thursday. If anyone is in these areas can you let me know what the conditions are like?

atomic1824
Posts: 357 - Karma: 251
Karma: 251
Posts: 357
Loner
Yep, it is snowing. I live in Burlington, we have snow. Word from NOAA is that highest report his morning was Jeffersonville (by smuggs) with 14", but Jay Peak may have more. Jay opens tomorrow, stays open through the weekend. But it is going to get warm quickly after this snow so get after it while the getting is good!
Go hike and ski anywhere on the Green Mountain spine North of Rt 4 and you will be rewarded. Good luck on the exam.
Apr 28 2010 10:38AM 0 0 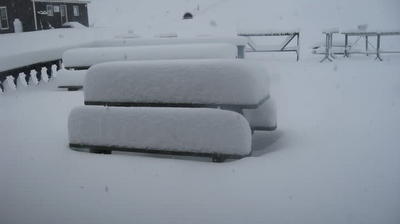 The only people who should be up there are people who have avalanche training and know EXACTLY what they are doing. 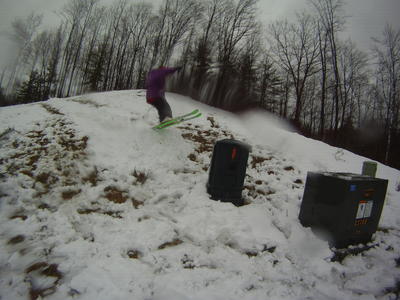 PtownJUNGLE
Posts: 75 - Karma: 10
Karma: 10
Posts: 75
Wannabe
Good post.. i didnt look at the conditions it was just a suggestion to look at but sounds like its shitty so no go.

I just want to make sure that people who read it realize the dangers and risks that this snowfall poses to Mt Washington and Tuckermans.

The weather is going to be gorgeous this weekend. Warm and sunny for Saturday at least. Last thing anyone wants to hear is some people getting excited about all the snow, heading up to Tucks with no knowledge, and putting themselves and others at serious risk.

"All of this weather will transform the Ravines from spring back to winter as increasing winds will create heavy density slabs over lighter snow creating weak layers near the the interface of the inverted snowpack. Heavier slabs over lighter ones translates into instability and avalanches. As the day progresses expect an increasing avalanche danger as snow instability rises with the shifting and building winds. Expect slopes and gullies facing a southern direction from the Lip back towards Lion Head including the Sluice, Right Gully, and the Lobster Claw to pick up new loading most intensely. As winds move from the NE to the NW these locales will be directly loaded as a number of others become crossloaded. With 16+" (41cm) falling already and an additional 6-10" (15-25cm) by midnight we will sit at the "HIGH" rating in most areas for the day. The S-facing slopes are at their forecasted ratings already with other locations lagging a bit behind. Hillman's and the Lower Snowfields will be last to reach the High rating with avalanches being "likely", but should be there by mid-morning. It's hard to believe the "Extreme" rating would come out this late in the year but there is a distinct possibility we may see it tomorrow depending on how the weather plays out over the next 24 hours. To boil all this down to one concept: We are likely going through a natural avalanche cycle already with instability rising over the next 24 hours. TRAVEL IN AVALANCHE TERRAIN IS NOT RECOMMENDED."
http://www.tuckerman.org/avalanche/index.html

Most of us east coasters should stay away from Tuckermans until the avalanche forecast improves. We lack the knowledge and experience to handle the mountain as it is right now.
Apr 28 2010 2:36PM 0 0

Anywhere else that received snow and could be open, locked their doors for the season and have shut down.

Relish_man
Posts: 5386 - Karma: 549
Karma: 549
Posts: 5386
No Life
this is balls we got 1ft at bromont but they cant reopen because theyre already installing the bike lifts. i hate myself for being too lazy to build a backyard jib

HAIR.e.G
Posts: 82 - Karma: 75
Karma: 75
Posts: 82
Wannabe
Very true... I was up there today and blazed the trail to the water pump past the hermit lake and trudged a little past there and had the caretaker's voice echo in my head. " Not a good idea to go up thurrrr" so i turned around and the p'toons and I did any damage we could inflict on the sherbie! Good coverage all the way down. 10" inches at the bottom with at least 16-18 near the shelters
Apr 28 2010 6:04PM 0 0 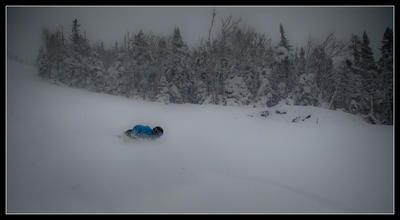 Wish I didn't have finals and could make it to Jay.

cbeebzthasteeze
Posts: 1862 - Karma: 85
Karma: 85
Posts: 1862
Insane
I hate you all... I'm in Western Maine and I haven't gotten shit. Actually, I take that back. Today I got wet, heavy snow that didn't accumulate at all. In my eyes, that's worse because it's like the snow god is taunting me.

Sean_Mac
Posts: 46 - Karma: 10
Karma: 10
Posts: 46
Lame
I'm driving up to Jay from southern NY after I get outta work friday night.  Sooo  stoked to be skiing in May, already booked a slopeside condo.  Just gotta barge through a 6 hour drive n ski saturday with no sleep but any skiing is better than calling it a season already.... Hope to see some of you out there

I wear a blue n white striped session jacket and a white giro helmet with a level 1 sticker, holler if you see me.  Down with the green scene n I plan on throwin a few back later in the day