What a crazy draft so far.

bros in the CFL draft.. no big

Wis_Skier_23
Posts: 2263 - Karma: 245
Karma: 245
Posts: 2263
Addict
Correct me if Im wrong but did anyone hear Rodger Goodell call Trent Williams a Silverback?
I can see him getting in some hot water for this

Every play this year better be a run.  Unless they get Clausen in the second who I don't have that much faith in but is definitely worth a second rounder.


im a jets fan. but im also a clemson fan so im glad we will play CJ 2x a year.

THATS_STREET
Posts: 2250 - Karma: 33
Karma: 33
Posts: 2250
Addict
why are you guys so high on clausen. dude is a scrub. notre dame is a shitty program and clausen will not be a starting qb in the NFL.

do you really want this guy on your team. 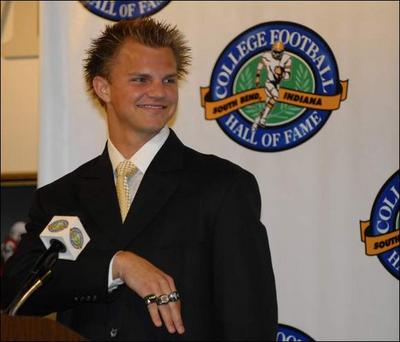 THATS_STREET
Posts: 2250 - Karma: 33
Karma: 33
Posts: 2250
Addict
nah mcclain is one of the best picks al davis has made in years.  bruce GODKOWSKI will lead the raiders to the promised land.

MistahSmith
Posts: 153 - Karma: 37
Karma: 37
Posts: 153
Pro
I wouldn't have a problem with this pick up, but Grekowski is to unstable right now. He was way to up and down for the games he played then he got injured, and he is just to inexperienced. And i dont even like the thought of Russel playing if something happens to him. We need two QB, not a QB and Russel

Edew19
Posts: 365 - Karma: 13
Karma: 13
Posts: 365
Loner
He's a great player, no doubt.  Its just that running back is one of the only offensive position on the Bills roster that is actually pretty solid.  Its great that we have a homerun RB but for hes only going to get  1/3 of the carries.  But there's still a lot of picks left so they can absolutely redeem themselves and sell me on this pick.

Edew19
Posts: 365 - Karma: 13
Karma: 13
Posts: 365
Loner
Well they drafted Lynch at 12 just a few years ago, it seems to me that they're just running in circles.  They also already have some of the best kick and punt returners in the league.

Right now we haven't traded anyone and im starting to think that if we do it will be Jackson.  Both Spiller and Jackson can hit holes and get up field really well but Lynch can get those tough yards.

Anyways after Ive slept on it im warming up to the pick just because there weren't too many awesome choices at that point.

Andrew_Ju
Posts: 9371 - Karma: 53
Karma: 53
Posts: 9371
Crazy Fool
ok now look at the first rounders....
none of those players are legends.... very few of them are superstars..... most of those guys are good players. now look at players from the first round....
ok lets take a look at the best players on each team who were first rounders. these are just off the top of my head, im sure i could find you more. notable superstars/players who had great careers are in caps
pats- RANDY MOSS, logan mankins, jerod mayo, TORRY HOLT
jets- mark sanchez, LADAINIAN TOMLINSON
bills- fuck the bills they suck at life (get at me ghostfacekillah!)
dolphins- jake long
colts- PEYTON MANNING, REGGIE WAYNE, DWIGHT FREENEY
texans- ANDRE JOHNSON, mario williams
jags- jags suck at life and i dont pay attention to them
titans- chris johnson
ravens- RAY LEWIS
steelers- casey hampton, im sure there are a lot of others
bengals- carson palmer
browns- browns suck
chargers- phil rivers, many more too
broncos- josh mcdaniels gave everyone away
chiefs- chiefs blow
raiders- LOL
eagles- donovan mc-oh wait.
redskins- donovan mcnabb
cowboys- demarcus ware, dez bryant will be a star
giants- eli manning
bears- brian urlacher
packers-brian cushing has already made an impact
lions- calvin johnson
vikings- ADRIAN PETERSON, percy harvin, etc
saints- jonathan vilma
falcons-matty ice
bucs- lol
panthers- steve smith (i think hes a first rounder?)
cardinals-LARRY FITZGERALD
rams-lolz
49ers-lolz
seahawks-lolz
so all in all, first rounders do matter, a fucking lot, a fucking lot more than undrafted players. you dont realize how many undrafted players get cut and or dont play every year. the draft matters a whole fucking lot
Apr 23 2010 11:15AM 0 0

Andrew_Ju
Posts: 9371 - Karma: 53
Karma: 53
Posts: 9371
Crazy Fool
and as for my opinions on the draft, i wanted the pats to get tebow in the second round, but the broncos are dumb enough to take him with the 25th pick. whatever. i wanted dez bryant too, but whatever the pats have gaping holes in the secondary and we have wrs
sucks for jimmy clausen, hes so fucking ugly no one wants him at all
Apr 23 2010 11:16AM 0 0

feihlination
Posts: 8356 - Karma: 1,084
Karma: 1,084
Posts: 8356
Crazy Fool
of course its hard to estimate whether someone will really help your team, but just browse through the draft-lists on wiki (just like 2000-until now or so). pro bowlers (=guys that made the probowl ONCE since their draft) are highlighted. and when you start at round 7 and go up, the highlights mark get more frequent and normally, the 1st round features twice as much probowlers as the second.

Andrew_Ju
Posts: 9371 - Karma: 53
Karma: 53
Posts: 9371
Crazy Fool
except one player can make a team win a hell of a lot more than 5 guys from rounds 3-7. id much rather have larry fitzgerald than 5 unnamed guys
and drafting is quite complicated.... there are teams that know how to draft like the patriots, who have drafted logan mankins and jerod mayo and brandon meriweather who are all pretty damn good now, and then there are teams like the raiders who draft jamarcus russell and darrius heyward bey who will always suck. its not all about the talent in the draft, its about how the team manages the player. and that is the science
Apr 23 2010 4:10PM 0 0

Andrew_Ju
Posts: 9371 - Karma: 53
Karma: 53
Posts: 9371
Crazy Fool
even still though, the vast majority of players who are great at their position come early in the draft. also, you have to consider this: teams that suck get the first few picks. the raiders drafted jamarcus russell. hes obviously gonna suck all his career cause the raiders suck at developing young talent, and so you can say that a guy like tony romo who was undrafted is better
you dont find the rounds 3-7 guys emerging in the nfl on bad teams. guys like james harrison (although im certain hes on roids) and tom brady and drew brees are all on good teams and are developed well. bill belichick knows how to use a player in a system, which is why wes welker puts up the numbers that he does. but you stick wes welker in the browns offense and i guarantee you he does shit
Apr 23 2010 4:14PM 0 0

feihlination
Posts: 8356 - Karma: 1,084
Karma: 1,084
Posts: 8356
Crazy Fool
i believed that kyle wilson is good, but a "big back" like ryan matthews (yes, i am a chargers fan and watched his college highlights) just beat him in footraces after he broke the first line of the defense.

i know that this is not the whole truth for a corner, but gamespeed-wise i wouldnt put him at the top. furthermore he looked like cro in that playoff loss and couldnt tackle matthews when he had an angle
Apr 23 2010 4:41PM 0 0

schu2122spiller was the most talented player in the draft...we need talent lynch is a thugged out scrub who find the first player wearing the same jersey and runs right into the back of them...almost like he ran over that chick downtown

Damn what a great take

BigPurpleSkiSuitDamn what a great take

Wasn't resurrection day supposed to be two days ago?

Sdot.Wasn't resurrection day supposed to be two days ago?

And I'm not religious. Maybe it's national plunger day, then.