So me and my roomate were talking....

K2skipunk
Posts: 2837 - Karma: 111
Karma: 111
Posts: 2837
Addict
and we were thinking of ways to bum for a season somewhere special in the middle of nowhere and just sled skii. We thought of the best accomodation, vehicle, or trailer, would be to buy an old school bus. after the bus has been cleaned, we would chop off the back 10 feet of it. With the back 10 feet gone, we could put a deck on the back to park the sleds on. The inside of the bus could be rearranged and decorated to fit our life style, like, couches, and shit. 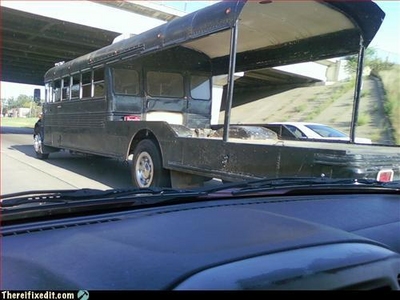 Well, if any of you are mountain bikes. Maybe you would have seen the TV show called Drop in. They got a dope school bus, all pimped out and shit inside. They have a bunch of beds, a dinning area, microwave, toaster and shit, but they had a second truck so they could bring the all the bikes. They didn't have any sleds. bus wasn't chopped, but it was dope. If you wan't to have an idea, go on rip.tv and search for Drop in.

Second thing, how are you gonna get the sleds up there.. it's gonna be pretty high, because a bus deck is high.

BUT do it. videoblog it. (like a bunch of people said.)

make a little sled ramp. not hard at all to make.

but dont repaint the entire bus, just put new lettering on the side of the school bus, where it used to previously say "canada high school" put "the school of motherfucking gnar"
and get a vanity plate that says "afterbang" or some shit like that. and then take the exhaust pipes for the bus, and re-route them right out the front fenderwells. when you step on the gas they will blow flames and smoke all over the side of the bus.
then videoblog it, get a bunch of huge corporate sponsors (red bull, the department of education, K2, line, fulltilt, wal-mart) and then proceed to become a well-known pro skiier.


and spend the whole year in revelstoke.

K2skipunk
Posts: 2837 - Karma: 111
Karma: 111
Posts: 2837
Addict
vanity plates cost extra, so no. and why the fuck would it say afterbang if we're going to be sledding. afterbang is possibly one of the worst trends that skiing has ever seen. the exhaust idea is retarded. I also highly doubt that there would be any sponsors willing to sponsor us.

and why revelstoke, theres doper places with less people.

pomme-de-terre
Posts: 3915 - Karma: 703
Karma: 703
Posts: 3915
Addict
hahahah im sorry for offending you so much, i was just joking. afterbang would never fit on a plate, the exhaust idea kills your engine, and the sponsor thing was yet again a joke. i was just trying be lighthearted, i didnt realize this thread was super cereal. hahah sorry again.

there ARE better places to spend a winter, but i just think revelstoke is cool as fuck. thats a purely personal opinion however, please dont get mad again.

Liam.
Posts: 5172 - Karma: 21
Karma: 21
Posts: 5172
No Life
not trying to be a negative nancy or a deby downer, but you realize your whole plan is gonna be fucking expensive. buying a bus...chopping it up, customizing the insides, buying gas, buying food, running a heater...by all means do it if you can afford it but think logically too