no_steeze
Posts: 23992 - Karma: 4,239
Karma: 4,239
Posts: 23992
@th1337
Recent slide in the woods at Stowe with a 12" crown. Don't think that because you're on the east or in trees that you are automatically immune to slides. It is an incredibly rare occurrence in this area but definitely something to always be wary about whenever there is new snow. All it takes is some heavy snow on top of a crust and some hoar frost and you're fucked.

Images pulled off this thread (http://www.tetongravity.com/forums/showthread.php?t=180643) read more for the full TR and more pics 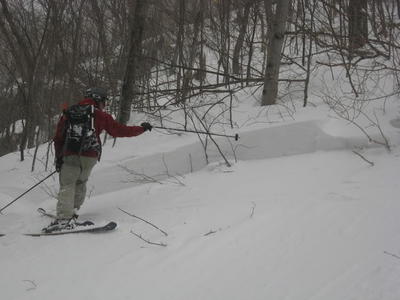 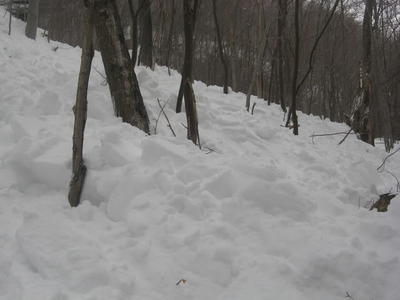 Not saying you should ski inbounds on the east with a beacon, but be aware of your surroundings, ski with a buddy, and know how to interpret the signs. If you are in a more exposed area make sure you're totally aware of the conditions that day and the snowpack. Also consider what lines are more dangerous than others and find the balance between putting yourself in danger vs skiing a sick line

From what I've seen on my time on NS, i feel as though in general we are somewhat careless when out of bounds in more exposed areas. Thank god there aren't more avalanche encounters on NS, but being carefree and having a fuck it attitude is great for the park and in patrolled areas, but be safe when you go in the BC.

If going into the backcountry, imo it is imperative that you have a beacon, shovel, probe, and an Avy 1 course. Learn to dig a snow pit, and read up about avy reports in your area before heading out. They're small investments that could save your ass Also, the number 1 rule, always, always, always ski with a friend when you leave a ski area. You're rarely gonna dig yourself out of a slide, you need a friend there to do it

So, to reiterate, several precautions you can take when putting yourself out there:
-SKI WITH AT LEAST ONE OTHER PERSON
-Beacon (i recommend the Mammut Pulse or BCA Tracker 2) and make sure you put it as close to your body as possible
-Metal shovel
-Long probe
-Avalung or ABS packs are your decision
-Avy training course
-dig a snow pit
-consider not putting on pole straps and not doing up your backpack straps for the descent

I'm sure this has been discussed many times before, but just a reminder that avalanches are really fucking scary and intense, and I hope nobody on NS ever has to experience one
Jan 4 2010 10:04PM 0 0

as for backpacks it's more of an opinion thing but you can get pulled around a lot by your pack as well so sometimes you just want to get rid of it
Jan 4 2010 10:33PM 0 0

Straps arent a huge deal on your pack, I can tell you first hand you will never shed that shit, if you get ride of your skiis you are lucky.  I always use poles with the things that go around your hands not straps.  I mean you are literally ripping and then you will just be like thats wierd wtf? fuck fuck fuck fuck fuck. think to look way ahead. Boom times up  Like read that and thats how fast your fucked.  We had 2 people get take out today alone in our area, its super gnar right now.
Jan 4 2010 10:36PM 0 0

thegreyarea
Posts: 3265 - Karma: 33
Karma: 33
Posts: 3265
Addict
Within the last 10 years, the topic of chucking your pack has changed from ditch it to keep it. If you're skiing with a pack that gets you pulled around a lot during a slide, then you're most likely skiing with a pack that has been overpacked and is not the right bag for the trip.
Only with extreme luck is ditching a bag possible. The guides and instructors I know always recommend to keep your pack on. Keeping your pack on increases your surface area and hence, increases your chances of a positive probe strike.
Jan 5 2010 12:38AM 0 0

Ben.
Posts: 21463 - Karma: 682
Karma: 682
Posts: 21463
@th1337
ive actually heard the opposite advice on the backpack, the added size can help you stay on top. hence things like those inflateable avvy wing packs. but pole straps and everything else so true.

more than anything, know what you are doing!!!!

all the equipment in the world can only do so much, and it cant save your life when a slide drags you over a cliff, or through trees and kills you.
Jan 5 2010 2:04AM 0 0

awsome thread, yah i will watch out for that stuff here in west virginia.

haha seriously though, we have a shit load of snow, and a solid, yet not crusty base. we are in deep!

InfernoHits
Posts: 4755 - Karma: 182
Karma: 182
Posts: 4755
No Life
i didnt read all of the responses so I dont know if this has been said. But it is no believed that you should keep you pack on. If you hit a rock, tree, anything back first in a slide you are probably going to be severely injured, the backpack will absorb and take some of that impact so your back will now
Jan 5 2010 12:06PM 0 0

i was skiing in chile with a guide friend whose a certified avalanche forecaster (highest you can be) and he swears by the no backpack strap thing, personally i ski with my straps on because otherwise my pack falls off and i want my avalung, but some people are pretty adamant about keeping the straps undone. it's personal preference
Jan 5 2010 1:39PM 0 0

wunderskier
Posts: 418 - Karma: 9
Karma: 9
Posts: 418
Ridiculous
Last year some lady died at Snowbird because an avalanch came down off of Baldy.  I am terrified of avalanches and I give you props for warning others of the extreme danger they bring.
Jan 5 2010 4:15PM 0 0

-Tristan-
Posts: 915 - Karma: 16
Karma: 16
Posts: 915
Insane
Yup, if you take any basic avy course or talk to your local forecaster/guide/professional they will tell you this. I've never head of anyone wanting to keep their pack on. I guess I can see some peoples logic though.

A British guy's friends reported him missing at 7pm

He was found the next morning by the piste basher. He was in a small triangle of ungroomed snow between two easy groomers. He had a 6ft slab of snow on top of him. He was dead.

Mountains are sweet, but they can bite your ass. OP has the right idea.

that is not a steep pitch and it's in trees which are natural anchors, but with a rain crust, hoar frost, and some heavy new snow anything can slide, even if it's in connecticut. incredibly rare and probably won't ever happen, but it could
Jan 6 2010 7:06PM 0 0

Literature
Posts: 13660 - Karma: 3,004
Karma: 3,004
Posts: 13660
Crazy Fool
Pack and pole straps are pretty far down the list as far as avie concerns go. Making sure that you have functioning gear, that your partners are competent, and reading snowpack and terrain are all far more important.

Stay safe out there, NS. Things are crazy all over.

TimmyK
Posts: 779 - Karma: 15
Karma: 15
Posts: 779
Ridiculous
I remember hearing that years ago an avalanche happened at Roundtop outside of harrisburg, pa, vertical is around 600 feet, so yes it can happen anywhere.

GotamaBCshredder
Posts: 5062 - Karma: 419
Karma: 419
Posts: 5062
No Life
We had avalanches everywhere yesterday.  Multiple people got caught no one killed.  There were some really big ones like 5 ft deep and a couple thousand vertical.  Im going crazy waitin to get out.

just an add: when an avalanche went down...and some poeple are under it..be carefull with the search...

these days in switzerland it happend..that some touring guys came into an avalanche...and while searching them a second avalanched went down and even more pople went udner it...and they all had the tracker on SEARCHING (of course) which means no signal to find them immediately!

the thing i wanna say..don't get panic when an avalanche happens...and look for more danger to come!

have fun in bc anyway!

(sry my english, hope u get it)