Valind
Posts: 4358 - Karma: 17
Karma: 17
Posts: 4358
No Life
Liquid Image has just announced new camera-equipped ski masks, swimming goggles and scuba masks, just in time for them to be unveiled at CES 2010. The Summit Series Snow Camera Goggle 335 boasts a 5MP still camera capable of shooting D1 720 x 480 resolution video at 30 frames per second with audio. It's got 16MB of built-in flash memory, expandable to 16GB via its microSD / SDHC slot. Other features include large buttons on the side of the goggles which are easy to press while wearing gloves and and a light inside the goggles which indicates when recording. The goggles are estimated to get about 2,200 still images or over 2 hours of video per charge on their lithium ion battery. Liquid Image expects to ship the Summit Series goggles in the summer of 2010, with a price of $149. Full press release is after the break
Jan 2 2010 11:17PM 0 0 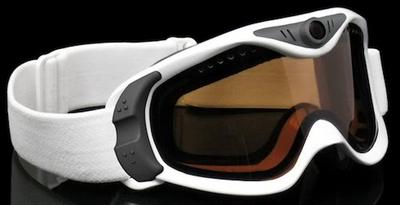 I_Am_Mod
Posts: 13214 - Karma: 3,731
Karma: 3,731
Posts: 13214
Crazy Fool
the strength of the GoPro lies in its mounting possibilities, i don't like the idea of having to ski around with a bulky goggle all the time and only being able to shoot from 1 point of view and not even being able to adjust it....
if a brand of POV cameras would merge with a goggle brand i hope it'd be countour, they make great cams but imho limited in their possibilities because they need to be goggle mounted...
Jan 3 2010 7:53AM 0 0