Sugar Gliding Squirrels are sweet, but I think it would hide under stuff way too easily. Ferrets are low maintenance, you can teach them dope tricks and keep themselves entertained.

Shedding is a pain in the ass :P

.brian
Posts: 1709 - Karma: 235
Karma: 235
Posts: 1709
Insane
my dad and brother are allergic so i have two small dogs around 7 pounds each, a maltese and a maltipoo, and they are awesome. They are so nice and fun to play with. plus you can just sit and watch tv with them in your lap. ones sitting next to me right now. and you can play with them on the commercials for something to do. I used to hate small dogs too, but once i got them i realized how sick they were. so dont hate on small dogs.
/rant
Jan 2 2010 6:57PM 0 0

ye get a black lab or a golden retriever or something

And I totally agree. People always argue that they smell, but its something that can be controlled with good care. You can get those glands removed, and make sure you clean them often. My pet ferret, "Brat", was the best pet I ever had. She was an open house pet, meaning she didn't live in her cage. We had little cat litter boxes in all corners of the house, which we trained her to use. She could sit, fetch, and roll over. She slept in the pocket and hood of my hoodies, and was so awesome. She terrorized the cats, and made you feel loved. Fuck I miss her.
Jan 2 2010 7:19PM 0 0 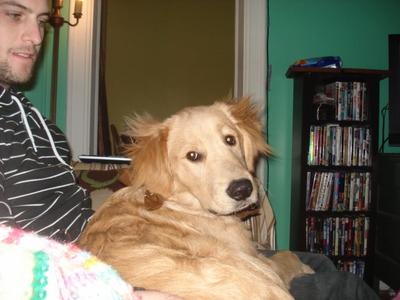 apcaipse
Posts: 2168 - Karma: 25
Karma: 25
Posts: 2168
Addict
Ferrets are NOT low maintenance. I don't know where you saw that they were low maintenance, but they are NOT. I had 2 ferrets, adorable things called Bandit and Sugar. They were amazing about 1 year old and they pooped, 25 times a day. They shat in every corner they were near. Anytime I took them out of the cage, which was AT LEAST once a day for an hour. Though usually I got them out for 2-3, and they were STILL fucking hyper and wouldn't stop running. You had to put down paper in every corner, I put news paper in every corner that they could go near when I got them out. It was shitty. On the plus side, they were amazing, they were really nice and playful and fun. They would jump and run and crawl, they made forts beneath pillows and sometimes they'd cuddle if you could get them tired. And overall they were a joy. But they smelled, like the worst things ever. Because they shat in their cage, A LOT. They smelled like shit, and they got shit on themselves all the time. And I had to clean them every month or they'd smell so bad I couldn't deal with it. And they smelled my room so bad we're replacing the carpet. I got rid of them after a year and a half of having them. Forgot to say that if you only get 1, it will be unhappy cause it won't have anyone to play with. So you have to get 2. And girl ferrets are what I got, and are WAY better then guy ferrets, because guy ferrets MARK. Meaning that they MAKE their piss smell horrible, like, beyond horrid. And guy ferrets hump shit. Make sure the girl ferrets are neutered, because if they aren't, they'll go into heat and die from too much hormonal trauma.
Sparknotes: Ferrets smell bad, shit a ton, require getting 1-3 hours of playtime every day. And require having their cage being cleaned every day. And are super high maintenance. Though, they're extremely fun and playful. If you have enough time for them, they're amazing. If you have school and work and skiing, I'd suggest not, because they'll smell bad and be unhappy.
Good luck with your choice.
Jan 2 2010 8:20PM 0 0

Oh haha, I hate when that happens :P

snwbrdmilf
Posts: 22441 - Karma: 2,778
Karma: 2,778
Posts: 22441
@th1337
First off, I'm a woman, not a him. I got my ferret when she was 2 months old, and raised her on my terms. She did not smell, because I took care of her. Unlike you, I didn't keep my ferret locked in a cage, she was free to roam where she pleased, thus diminishing the hyperactivity you experienced. Knowing how to raise and take care of something is what makes it a good pet. If you suck as a owner, so will your pet.

I never said they weren't high maintenance. They will however, be a pain in the ass or hassle if you get them for the wrong reasons. So fuck off with your facepalm please.
Jan 2 2010 9:42PM 0 0

titsLOL
Posts: 7485 - Karma: 395
Karma: 395
Posts: 7485
Crazy Fool
do you have any idea how ferrets entertain themselves? by eating/hiding/shitting in your personal belongings all day long. terrible pet.

dogs are obviously the best pets, but take the most commitment as far as time and money are concerned, literally a 24/7 time commitment when they are young and pretty damn close for the rest of their lives. A day of skiing or working is about the longest you could leave a dog alone. My roommate and I got cats and they are dope. Cheaper and easier than dogs, but still very entertaining and fun to chill with as long as you bring them up to be cool and friendly. And if you want to take a trip for a week for two you just need to find someone who can stop in to feed them and clean the litter box and they wont get super bored/depressed (good reason to have two).
Jan 2 2010 9:46PM 0 0