What is after bang?

Steezy_IN_KC
Posts: 2033
Karma: 82478
Posts: 2033
Addict
A gapper AKA my little sister... asked me what is the true definition of after bang was... after giving my 2 cents she still didn't understand. BUT i did find this in the process of explaining to her and thought it was worth a post...
Afterbang is an art mastered by a select group of skiers, such as Tom Wallish, commonly referred to as TWal or variations of this...because he is a beast. After bang involves a specific technique that requires you to almost look as if you care too much about not caring after you land a trick. It can be used on any landing, although particularly looks awesome if used after hitting a huge kicker. Rather than the rough, stiff traditional landings in which the skier looks as though he/she is grateful for their life after the attempt and is skiing away straight as a stick, afterbang, on the contrary, offers a much more stylish way of showing who owns the terrain park:
From head to to:
1. Upon landing, flex the legs as you normally would but when you regain balance, lean back slightly as you are riding away.
2. Rotate the torso 17.5 degrees to the right or left, so that you look relaxes as you are slightly turned and leaning back like you are in the center of your comfort zone.
3. Bounce the head in a relaxed, casual fashion, as if you were listening to the song PIMP by 50 Cent.
-To sum it up, look like the huge trick was nothing and you could throw it off the jump all day-
Finally, after a day of doing this you will most likely receive comments from other skiers and riders in the terrain park saying things like, "Dude that spin onto the rail and the switch ups were sooooooo dope!!!," etc...
Dec 24 2009 2:33AM

afterbang is more simple than people make it

but Jon Brogan is the god of ride aways!
he brogs every landing!

PAuL_Hellar
Posts: 1355
Karma: 26567
Posts: 1355
Insane
NO
afterbang isnt something u have to prepare yourself to do the real masters just do it without thinking about it when you try to force the bang you look like and idiot when it just happenes is when it is at its prime
Dec 24 2009 9:42AM

[BRI]noceros
Posts: 2319
Karma: 81021
Posts: 2319
Addict
haha alright, that wasn't just to you, it was to others too. i have seen people post things similar to what you posted and it gets to a point where it's kinda ridiculous

schmooey.
Posts: 471
Karma: 33696
Posts: 471
Ridiculous
why is everyone freaking out? seriously guys? stop taking everything so seriously. keep in mind that this is an internet forum, and no matter how seriously you may take skiing on the slopes, you can't still kill it in front of the computer screen. i thought this was kind of entertaining...
Dec 24 2009 10:24AM

with_stupid
Posts: 316
Karma: 8202
Posts: 316
Loner
agreed. you guys all seem like dicks. give the kid a break. just cause he doesnt know the "whats cool enough and whats not cool enough" to be threadworthy posts yet, you guys fucking tore him apart.
Dec 24 2009 10:34AM

why do you care theres alot of snowboarders on this site 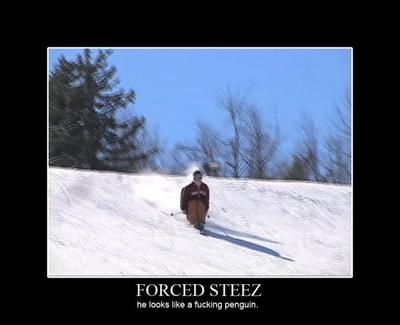