line skis how could you do this? first the invader now the anthem. please explain yourself because last week my first day on my anthems was my best day skiing ever. hands down. they are so damn poppy in the park yet i loved tearing down groomers leaving rooster tails in ski patrols face. they are such a great ski stiffer than lizzies but softer than abangs they seemed perfect. i really cant wait to see what you deem worthy of replacing this piece of perfection. and please dont come out with something stiffer cuz soft skis are so much fun especially for lightweights like me.

i think everyone in here should tell a story of the best time they had on their anthems.

sasquatcher
Posts: 119 - Karma: 14
Karma: 14
Posts: 119
Pro
Sweet now I see that the SIA part 1 was updated. They should stil laminate the 7 ply, thats where the Anthem has it's advantages over the Afterbang, the Anthem has cap construction and doesn't chip really easily, the Afterbang holds up well except for the top sheet chipping and splitting. I still think they should have the Anthem.
Feb 1 2010 8:42PM 0 0

LockyK
Posts: 404 - Karma: 16
Karma: 16
Posts: 404
Ridiculous
yeah i got that model, and even though i have broken them i still ride them coz they are awesome.

pholtan
Posts: 120 - Karma: 1,628
Karma: 1,628
Posts: 120
Pro
i have to say i dont want the anthems gone but people cant say like ooohhh well look how easily you can break a skateboard... you cant flex a skateboard, you can flex these skis, and skateboards dont go in ski presses. i would rather have the invaders and anthems than afterbangs and step ups or whatever dont get me wrong
Apr 7 2010 8:53PM 1 0

knows_butter
Posts: 477 - Karma: 31
Karma: 31
Posts: 477
Ridiculous
Just got my '09s shipped out.
Sometimes I swear I can hear voices in the middle of the night whispering "ski me".
Its been a looooong summer in the southern hemisphere so to ease my cravings, I've assembled a skiing "shrine" in my room. 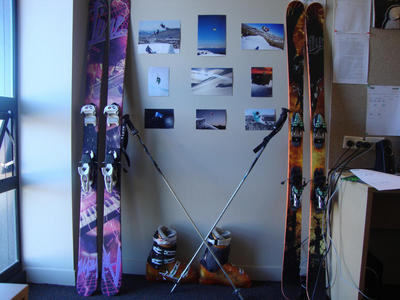 RIP to the anthem. I'm guessing Line is discontinuing it to try and generate sales of their other skis. If they kept the anthem going for 2011 a lot of 2010 and 2009 anthem owners wouldn't bother upgrading, but if they introduce an "all new revolutionary" ski such as the step up a lot more people are likely to buy it because its something new.
Either that or they'll reintroduce it in a few years in the hope it'll sell mega numbers due to anthem lovers having worn out their old 2009/2010s. I can see it now "The legendary anthem is back for 2015". Everyone gets on the hype train and buys it.
Whatever the reason is, you can guarantee that Line has done what is best for their own profitability. There will be a very good reason that we're likely to never know.
Apr 19 2010 10:40PM 0 0