Why weed is elligal (check this)

Anslinger was an extremely ambitious man, and he recognized the Bureau of Narcotics as an amazing career opportunity — a new government agency with the opportunity to define both the problem and the solution. He immediately realized that opiates and cocaine wouldn’t be enough to help build his agency, so he latched on to marijuana and started to work on making it illegal at the federal level.

Anslinger immediately drew upon the themes of racism and violence to draw national attention to the problem he wanted to create. He also promoted and frequently read from “Gore Files” — wild reefer-madness-style exploitation tales of ax murderers on marijuana and sex and… Negroes. Here are some quotes that have been widely attributed to Anslinger and his Gore Files:

“There are 100,000 total marijuana smokers in the US, and most are Negroes, Hispanics, Filipinos, and entertainers. Their Satanic music, jazz, and swing, result from marijuana use. This marijuana causes white women to seek sexual relations with Negroes, entertainers, and any others.”

“…the primary reason to outlaw marijuana is its effect on the degenerate races.”

“Marijuana is an addictive drug which produces in its users insanity, criminality, and death.”

“You smoke a joint and you’re likely to kill your brother.”

“Marijuana is the most violence-causing drug in the history of mankind.”

And he loved to pull out his own version of the “assassin” definition:

“In the year 1090, there was founded in Persia the religious and military order of the Assassins, whose history is one of cruelty, barbarity, and murder, and for good reason: the members were confirmed users of hashish, or marihuana, and it is from the Arabs’ ‘hashashin’ that we have the English word ‘assassin.’” 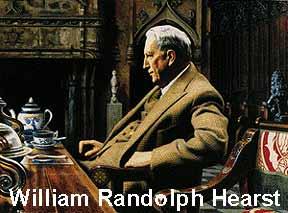 Harry Anslinger got some additional help from William Randolf Hearst, owner of a huge chain of newspapers. Hearst had lots of reasons to help. First, he hated Mexicans. Second, he had invested heavily in the timber industry to support his newspaper chain and didn’t want to see the development of hemp paper in competition. Third, he had lost 800,000 acres of timberland to Pancho Villa, so he hated Mexicans. Fourth, telling lurid lies about Mexicans (and the devil marijuana weed causing violence) sold newspapers, making him rich.

Some samples from the San Francisco Examiner:

“By the tons it is coming into this country — the deadly, dreadful poison that racks and tears not only the body, but the very heart and soul of every human being who once becomes a slave to it in any of its cruel and devastating forms…. Marihuana is a short cut to the insane asylum. Smoke marihuana cigarettes for a month and what was once your brain will be nothing but a storehouse of horrid specters. Hasheesh makes a murderer who kills for the love of killing out of the mildest mannered man who ever laughed at the idea that any habit could ever get him….”

And other nationwide columns…

“Users of marijuana become STIMULATED as they inhale the drug and are LIKELY TO DO ANYTHING. Most crimes of violence in this section, especially in country districts are laid to users of that drug.”

“Was it marijuana, the new Mexican drug, that nerved the murderous arm of Clara Phillips when she hammered out her victim’s life in Los Angeles?… THREE-FOURTHS OF THE CRIMES of violence in this country today are committed by DOPE SLAVES — that is a matter of cold record.”

Hearst and Anslinger were then supported by Dupont chemical company and various pharmaceutical companies in the effort to outlaw cannabis. Dupont had patented nylon, and wanted hemp removed as competition. The pharmaceutical companies could neither identify nor standardize cannabis dosages, and besides, with cannabis, folks could grow their own medicine and not have to purchase it from large companies.

This all set the stage for…

"Why are there so many threads about marijuana being illegal?  There should just be one thread, and it should say WTF, marijuana is illegal!  and every response should be, I know man, WTF, someday though."

also they wouldn't make weed elligal if their only reasons were that it gave people a shortcut to the mental asylum or whatever you quoted, they taxed marijuana to make money off of it. I mean if the head of the federal bureau of narcotics genuinely believed that weed had all of those effects on people, good for him, but congress didn't necessarily believe that they were preventing marijuana use, a major contributing factor for it being passed was that the government would make money from the tax. why do you think the government encouraged farmers to start growing hemp and shit?
Nov 6 2009 5:39PM 0 0

noparking
Posts: 1123 - Karma: 48
Karma: 48
Posts: 1123
Insane
How the hell is anyone going to take you seriously when you can't even spell illegal correctly?

As you can see my clients interests started in 2007 with line skis. then he wanted to start a KrEw named 7bipi in september 2007 this went on to fail miserably. April 2008-July 17th 2008 he liked fucking zig-zags. January 2009 he liked banging. August 4 2009- present. The boy finds the sacred drug marijuana/weed/cannabis. He likes it so much he changes his name cannabinoid. He loves it so much that he wants to explain to ns why marijuana/weed/cannabis is elligal thinking to himself that he is so original and he just wants to explain why it is elligal.