meth_time
Posts: 2783 - Karma: 16
Karma: 16
Posts: 2783
Addict
a door, we thought it was an abandoned school but it turned out to be a community center, and they wouldnt of known it was us but a bunch of christians wrote our names on it.
any other graffiti stories?

hoodhugo
Posts: 988 - Karma: 34
Karma: 34
Posts: 988
Insane
i quit because i realized it was kinda a dumb thing to get arrested and in trouble for. and becuase i was not very good at it 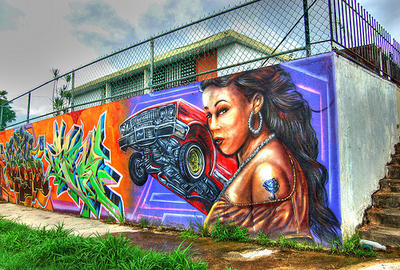 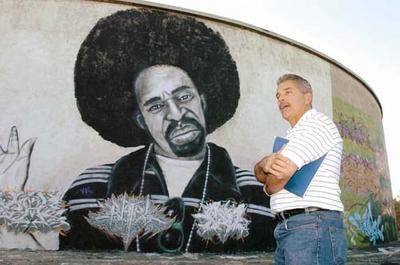 I used to be into graff when I was in highschool and bombed around my hood...theres a beach 45min from my house that has a Legal wall that you can tag on....pretty sick Idea, more communities should have them so people can showcase thier art and not deal with police.

Once I turned 18 and realized I would get fucked if I ever got caught I stopped and now I just write in a black book or save it for when I'm back home and can get a few cans and go to the beach.

Here's a picture I took this past summer of the Graffiti Wall...dope shit.

I have deuce storiez.

Once i was doing this wall on the back side of a building. I had heard someone walking in the bushes near the building but i figured it was just a hobo. and i was almost done when i cop pulled into the buildings parking lot. So i threw the cans in the back back and ran as fast as i could away from the cop/down the street. I didnt stop running till i got into my room. I went back and finished.

Second one was at like 1 am on this brick wall by a museum. I had like 5 cans in my back pack and i was wearing all black, a bandanna and a toque. Anyways its like 1 am ther is no fucking cars when i looked and i j-walk across the street and i go right infront of a cop. gheyy.And the cans my bag are making alot of noise. so i cross the street and he slows down, stares at me as he is driving, and i stare back for like 10 secs. anyways im like 30 second walk from home free ( my house) and the cop pulls up the street and parks. so i just book it to my house and i was safe.

hope Dawn is making some good money with hours that late.

haha, okay I'm a pussy because I tag on a legal wall? Actually if you knew anything about PNW graff you would know Bolinas beach's tagging wall is famous and writers from all over the world come here to piece. All the legendary San Francisco graff artists hold this spot down and make sure to paint over any toy piece. LIB, UM, TKO, ect all run this spot and most of the pieces are super legit, you think your sick cus you tag on illegal property? well these guys do too but ever so often don't you think it would be nice to do a piece in the sunshine on a nice day drinking a beer watching surfers....yeah it is really fucking nice.

meth_time
Posts: 2783 - Karma: 16
Karma: 16
Posts: 2783
Addict
getting your art shown without ending up paying fines sounds better then walking around at like midnight making sure nobody sees you.

i was in chicago with my cousin one time and we went down to the subway at like 2am and was sketchy as fuck and we saw like 5 guys tagging a stopped train with some political shit and they saw us and fuckin booked it into the subway into the middle of nowhere, they just dissipated.

DANETRON
Posts: 6671 - Karma: 141
Karma: 141
Posts: 6671
No Life
I wasn't even gonna post in here cause im one of those paranoid people and would rather just stay under the radar but you sound toy, not meaning that as a dis to you but it's the way you seem to come across.

I would be hesitant to write a legal though with the whole cops looking to get a face to the writer thing. I guess i'm just really paranoid.

Luc.
Posts: 7540 - Karma: 59
Karma: 59
Posts: 7540
Crazy Fool
in graff, the term 'toy' is much like the term 'noob' in skiing.
a toy is someone who knows little graff history, is new to graff, doesnt know the rules that go along with graff as far as respect, usually lack respect for more experienced writers, dont know the true legends of their area, have no idea what the fuck they are doing, terrible letter structure, pour can control, etc etc etc.
most of this comes with practice practice practice. respect is something you either have or dont have...and will eventually either get u respect, or be the cause for you getting your ass kicked.
Oct 27 2009 11:48AM 0 0

you just gotta know were to look...

but then again were I'm from graff is soo big that it doesnt matter who you are or what crew your with...cops have more to worry about than going after graff artists...if they come across one they are damn sure going to get wrapped but it's highly unlikely they will target you...unless its gang affiliate graff which has no artistic value whatso ever.

but I would never consider myself a writer anyway, I just like to educate myself on a broad range of topics... I have a lot of friends that write and are really serious about the whole culture.

everyone, just go to http://artcrimes.com and browse around...you will be blown away. Check out SF artist "Apex"

yeahhhh i got a story!

so my friend was realllly sick at graffiti and he inspired me so i kinda got into it (this takes place 2 years ago).  I pretty much started by painting a wall with him before I had even drawn in a book at all, so i was pretty much the definition of a toy; however, i felt badass going out on the weekends and painting on shit thennnnnn to sum the story up we got arrested one night, at 3 am, sat in a holding cell for 2 hours and my parents came and picked me up

i waited for an entire year before i heard anything thinking i would owe thousands of dollars and possibly go to jail (because that's pretty much what they told me, and i was 17, so i was considered an adult in court).  then i ended up finally going to courth and getting charged for 6 accounts of graffiti, 4 were dropped, and i ended up paying like $350 and doing 50 hours of community service.  and what pisses me off is my friend who was 16 at the time, get's arrested AGAIN like a year later, and he gets off scott free for the first time, and pays like $150 worth of fines the second time

but now my records clean!

he accompanied it with kittys and penises, i have no idea why he did my name, but i guess he was just really high and confused, i only found out about this because another friend came up to me and said "hahah dude! did you put your name up on that ramp!? people were pissed!!"
and i was like "what the fuck are you talking about?"

does that count as graffiti?