A journey to the heart of a ski film festival in Montreal. 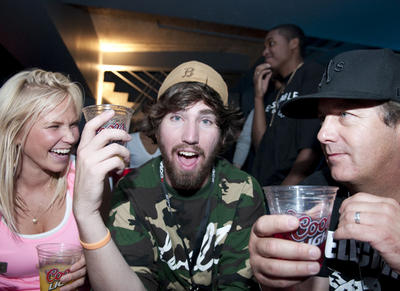 end wide photo (Ed's note: Vermonter Liam Downey returned last month to Montreal for the IF3 film fest and associated sidecars. It brought back a lot of memories, and forged new ones too, like how signing late at night in Québec is an international language. This is Downey's first piece for ESPN Freeskiing.)

Historically, Montreal has been a hit-or-miss spot for me. Coming of age in Vermont, the city to the north offered all the sordid excitement that a pre-21 party destination possibly could: 18-and-up bars and strip clubs abound. But despite the huge potential, my Québec outings suffered from poor judgment and a lack of planning. Too much money was spent, the language barrier got us in trouble, four of us slept in a Subaru Outback, someone got in a fight, and so it goes.

I can't blame the city itself for the shaky track record, a product of youthful inexperience more than anything. I still love the place like a drunken French Canadian relative who shows up once or twice a year on short notice; there's no telling what might happen, but it's likely to get weird.

What I'm getting at, is that all this has changed. The last three years has seen the rise of a promising new era in Montreal excursions. Now, for just a few days each September, I can be more than a stray minnow among the sea of well-dressed (or topless) women and hair-gelled guys wearing saddle shoes. No longer will I care that I'm being pegged for a stupid American when greeted with "Bonjour, hello!" at restaurants. To what do I owe this good fortune? IF3.

IF3 is the International Freeskiing Film Festival. It is a popular misconception that the "3" in IF3 is indicative of the number of times that the event has been held. But it actually stands for the three "F's" in the name. The fact that this was the third one is mere coincidence. Either way, it's a big deal, yo. photo wide 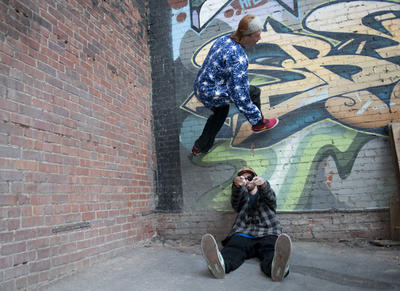 One attraction of Montreal is alleys with French graffiti, as Dane Tudor (up) and Downey (down) discover.

Pretty much every ski movie shows there, amateur and professional. In freeskiing, I would liken it to the Sundance Film Festival—if Sundance premiered every blockbuster from the whole year at once, on top of all the independent films. The people who go to IF3 like to watch skiing a lot, and even though sitting through every movie consecutively could drive you insane, the energy level stays as high as the blood alcohol content throughout the weekend.

All is revealed in the space of three days: Nine months of ski hype is confirmed or rejected and the pundits head to the worldwide web. The rest of us head to the club, and after a lot of partying, it is over.

This year was the biggest turnout yet. The streets of Montreal were a parade of Jiberish hoodies and rowdy youngsters yammering in French about a rail trick that someone named Phil did. My only objection to the whole scene is that they love rails too much in Québec, never cheering loudly enough for the backcountry kickers and big mountain lines. I guess everyone is a product of their environment.

The movie showings start midday and go until nine or so, and then we all head off to a designated club that you can get into for free with a premiere pass. Those who have swallowed enough liquid courage head to the dance floor, and those who can still talk after cheering through half a dozen films continue yelling at each other over the music.

JF Houle is a Québec boy in the unfortunate position of knowing just about every skier at IF3 (there are quite a few Québec movies in both the am and pro categories). By the end of the first night, his voice was scratchy and fading fast from supporting all of his buddies in the theater. By the second, JF sounded like a pubescent boy with a bad cold. He would dive into a sentence and lurch squeakily to a halt within the first couple of words, blushing slightly and looking at his feet.

We met one guy who is deaf and mute, which gave us a chance to give our throats a rest. He was a really cool cat with dreadlocks, a skiing aficionado who knew Corey Vanular from somewhere. Apparently, he is a musical artist who signs his voice for the hearing impaired, and we talked with him in our rudimentary sign language for a few hours.

Phil Casabon had a really hard time explaining to him that Henrik Harlaut had done a switch 1620 and not an 1800 in one of the films, and a cop thought we were being wise guys when we told him that the fellow could neither hear nor speak. This was after the club had closed, when the police were trying to clear the street of the throngs of skier kids and scenesters that had amassed outside the Telus Theatre. The cop was especially pissed at Lolo Favre, but he let us go. photo wide 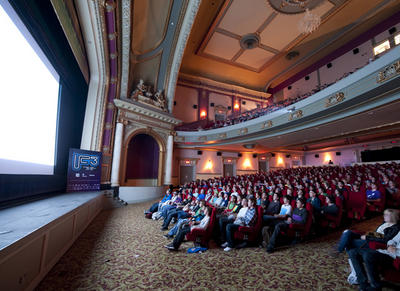 All across the land right now skiers are streaming into theaters like so many salmon of Capistrana. (Telus Theatre, IF3, Montreal.)

After that, Lolo took to the streets on one of the bikes that you can rent from an automated bike rack with a credit card. He hopped on the thing and immediately rode it down back-to-back 30 stairs at mach speed, skid-stopping on a dime right before he hit traffic. Quite impressive. These rental bikes are all the rage up there, which has to piss the cab drivers off. I hope it does, too.

The night before I'd been in a cab with Jimbo Morgan, and the cabbie—who spoke not a lick of English or French—had no idea where the Hilton was. He drove us in the wrong direction for ten minutes, refusing to let us out. When he stopped to ask another cabbie where to go, we bailed on the fare. Jimbo let him know what time it was as we walked off, but I doubt he understood, although he made a great deal of bad noise. Afterward, we stopped by McDonald's to watch two crazies argue over some half-eaten poutine while the rest of the clientele looked on with unsteady legs and glazed eyes. We got back to the hotel at 7 a.m.

If I haven't provided you with a very good idea of what IF3 is, I apologize. The whole ordeal is like trying to remember a sleep deprivation contest. It took me the better part of a week to convalesce and regain the use of my vocal chords. Now that they've healed, I'd like to give a shout-out to the event organizers, especially Felix Rioux and JF DuRocher, for running a tight ship up there. I'd also like to thank everyone who made it up to Montreal for the third year in a row. Never again will I be afraid to venture into that strange and wonderful city, so close to home yet so un-American in all the right ways. At least not on IF3 weekend.