Isaac Freeland x Sego Skis - Get To The Bec Pt.2

On the 29th October '09 two of the biggest names in ski films are coming to London.

AMC are hosting a ski film premiere evening with Poor Boyz Productions 'Everyday is a Saturday' and Level 1's 'Refresh'.

The venue - a converted London theator with several levels, 4 bars and a whopping 40m screen!

Doors open at 6pm and the first film 'Refresh' begins at 7:30pm during that time we've got all sorts of people in displaying this years lines - Tall Tee's, Ski Bartlett, Amplid, AMC Development and a few charities too - Scope and MAG.

After the first film we've got a huge raffle with everything to be won from sticker packs - skis - beanies - ski boots and everything inbetween!

The second film commences and at 10pm the after party begins!

Tickets bought in advance are £8 normal entry and £14 VIP - both tickets give you one entry into the raffle and the VIP gives you access to the altitude bar after 10pm for the official AMC afterparty! Where more films and possibly live music playing.

More information can be sought from:

Tickets can now be purchased from

Pre-buy tickets to avoid queues and possible dissapointment on the night! 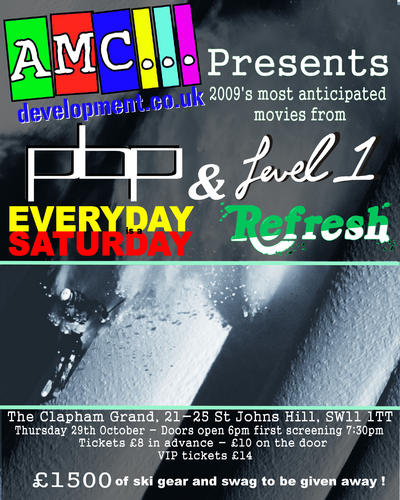 Already got my ticket.  Its gonna be sick!

That will be sick - i'm in London from next week - but heading back to the States on the 26th - def go though, Clapham Grand is carnage.....

gkenworthy
Posts: 779 - Karma: 12,862
Karma: 12,862
Posts: 779
Ridiculous
Yay London! My birthplace!
I don't think there are too many ski resorts there though.   They have sick snowflex ski areas!  They are premiering it in London on the 29th, because that is the same time as the LG London Freeze big air!

JoeTheRipper
Posts: 1567 - Karma: 14
Karma: 14
Posts: 1567
Insane
got some friends I need to visit in London actually, might make the trip. Sick films and a party (when's the party finish), sounds fun to me!

party finishes at 3am :)

for those who've bought tickets - stoked! :) see you there. Can join on the fb group as we'll be updating the event and doing some press releases closer to the time ;-)

for the 50th, 100th, 150th etc (you get the idea) ticket sold we allocate you an extra entry into the raffle - double your chances of winning a set of skis, this years subgenius Amplids new ski boots retailing at £315 and loads of other stuff!