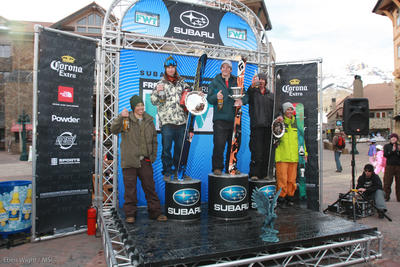 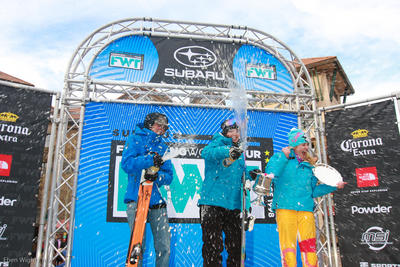 Telluride, Colorado, February 7, 2009 – On one of the highest peaks ever to host a freeskiing competition, Mark Welgos and Claudia Bouvier overcame tough conditions to win the 4th Annual Subaru Telluride Freeskiing World Tour Qualifier. They each blasted off Palmyra Peak, the 13,320-foot apex of Telluride, down cliff-riddled, 45-plus-degree steeps, enduring fierce winds and iffy visibility.

Their victories capped the first ever competition held on Palmyra Peak. Helicopters were supposed to deliver contestants atop Palmyra’s sky scratching, rocky pyramid. But increasing gusts grounded the bird, forcing many to hike 90 minutes up Palmyra’s oxygen-scarce, knife-edge ridge. Conditions limited the 15 female competitors and 35 males to one run each. Without much chance to rest or to scope lines, skiers busted fewer airs than normal, opting instead to ski fast and aggressive down Palmyra’s massive, alpine apron.

The winners, however, still put plenty of air beneath their boards, especially the men. Fifth place finisher Michael Gardner popped a big air mid-slope, earning a big score for choice of line. Lars Chickering-Ayers, who came in fourth, wowed the several hundred spectators with a pioneering new line with a double jump. Telluride local Chason Russell, who finished third, milked several hucks out of familiar terrain, blasting from far skiers right to left to do so, earning the day’s loudest ovation. Second place finisher Arne Backstrom, of Squaw Valley, California, qualified for the rest of the tour with a bold fluid run. And Welgos, of Aspen, earned not just victory with 72.88 points but also the coveted Sickbird award—given to the skier who puts in the most spirited, most extraordinary competition run--for hurling off Palmyra’s many cliffs. He edged Backstrom by .69 points.

Claudia Bouvier of Vail, CO, scored the highest yesterday, then did it again today, with a two-day total of 68.50 points. Her tight, compact style earned the champ the nickname “Little One.” Like Bouvier, Friday’s second- and third-place women also repeated their standings on Saturday, with Jaqui Edgerly of Aspen maintaining her lead over Alexis DuPont of Baldy, with a two-day total of 66.75 to 62.88. All threw down fast, fluid runs.

MC Frankie Alisuag gave repeated props to the crowd, for hanging at the 12,000-foot-plus finish in freezing cold that made his feet feel like “blocks of ice.” He also raved about moving the finals to Palmyra Peak, saying it “could be as world-class a venue as any. We’ve raised the bar.”

For more information and a full tour schedule, please log on to www.freeskiingworldtour.com

Coming off a breakthrough year in live webcasting technology, MSI’s content creation team will be producing and posting same-day world-class photography on its newly redesigned website, www.freeskiingworldtour.com and media partners www.powder.com and www.skipressworld.com. MSI will again be satellite broadcasting from the four FWT stops. Live coverage of the best freeskiing in the world can be viewed from the comfort of your desk chair. 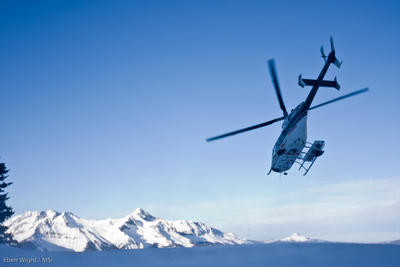 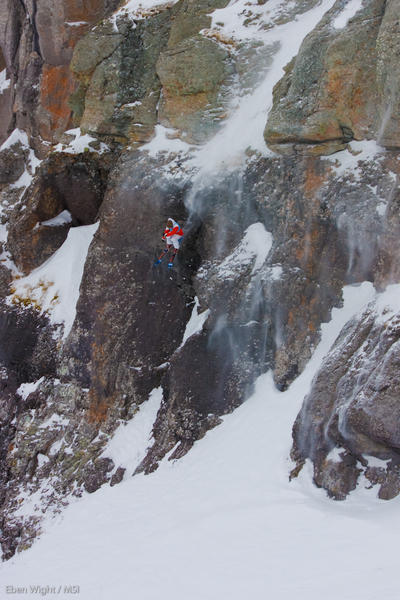