Once upon a time..in January of 2005 to be exact. I spent half of my work savings on a pair of brand new tecnica diablo flames and a pair of volkls. Needless to say i got suckered in horribly into spending almost 1500 on all that. But being a hopeless gaper, I thought I had the coolest set up.
Then I took a train to chicago, stayed at a friends house in indiana, and a few weeks later (after crashing his car while trying to get to whiteface from indiana, on I90 at 3 am in a snow storm), i took a greyhound out to bozeman, montana.
There I got on the karst stage and headed to Big Sky where a wonderful job awaited me.
I got there on friday. january 19th to be exact, with skis, boots and a supply of canned goods in tow.
i got to my room in employee housing, dropped off my stuff and headed off to ski.

If you have ever been to Big Sky, you know its big. And Lone Peak is really impressive. It was a shitty icy day up there, but I was super happy to be starting my life as a ski bum. So after taking two lifts I finally got to the Lone Peak Tram.  Little did I know the horrors that awaited me. I got on the tram, still full of confidence that I was going to tear up Lone Peak, even though I was a groomer skier from the east coast who had never even seen terrain like this.

When I got to the top of Lone Peak, I was a little scared. I was really high up and it was a long and steep way down. But looking at my brand new equipment gave me a new sense of confidence. I got into my skies and started down the mountain. Only problem is that there were little rocks everywhere and the snow was really crusty. There were actually little arrows which patrol put there showing the best way through all the rocks. I got stuck in dead ends a couple of times and had to side step up. This was really steep terrain and my legs got really tired. Finally I got on Yeti traverse? and cut across a bunch.

I got tired of traversing. Decided to ski down. Later I found out that I was skiing down Dictator Chutes.
Turning was really hard and my legs were already tired. I passed only one person in the Chutes. It was Pedro, the ski instructor ( i later found out). Pedro had a radio with him. I got to a point where there was a rope CLOSED. WTF?! I thought. I would have to sidestep up 30-40 feet to get out of the chute. I said fuck it and ducked the rope.  A few seconds later i lost my balance, fell and slid over the edge of something. I basically slid down an exposed face of rocks
(see picture) 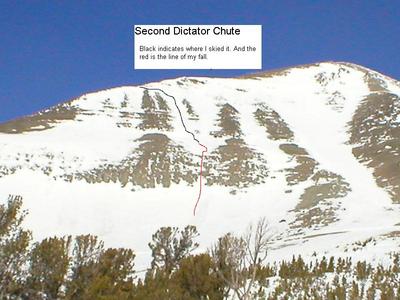 flipped over and slid about 50-100 feet head first onto Castros.

Pedro saw me fall and called it in. I was lucky to walk away with about a half dozen softball size bruises, a torn up jacket, cut up elbow, two broken boot buckles and a lot of fear. Patrol came and said that they were expecting to pick up my brains from the rocks. I wasnt wearing a helmet either.. (too cool for that)..(Seth Morrison didnt wear a helmet in Warren Miller's Cold Fusion...) Anyway I thought my season might be over but somehow i got lucky to walk away only with flesh wounds.

I did not ski Lone Peak that season again, and never have since. Instead I started skiing in the park.
I have skied steeps since then, but Lone Peak definitely owned me for awhile.


Summary: My first ever run at Big Sky Montana almost killed me, and scared the shit out of me for a while so that I stayed away from the Tram and skied park instead.

SteezyMcDizzle
Posts: 514 - Karma: 31
Karma: 31
Posts: 514
Ridiculous
In case you don't know what Big Sky looks like here is a pic of Lone Peak as it looked in 2005:
And another picture which is another angle of the place where i fell: 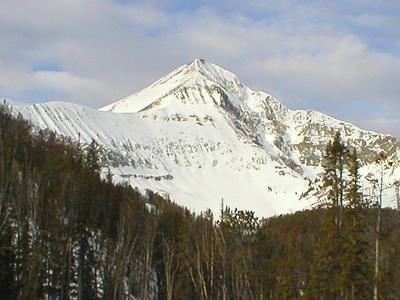 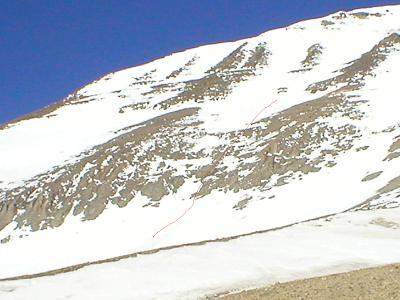 .jon
Posts: 2121 - Karma: 345
Karma: 345
Posts: 2121
Addict
lone peak is pretty intimidating, especially the tram ride up when it seemed like everyone had fat skis and was a local... and then there was me on my center-mounted park skis haha. damn that was so much fun to actually be able to ski difficult terrain a few days in the season