Today a snowboarder asked me...

SnowRidgeParks
Posts: 2146 - Karma: 88
Karma: 88
Posts: 2146
Addict
Is this supposed to be a no poles promotional thread or something? I ask because I can name a number of uses for poles, starting with turn initiation and proper body position, balance and stabilization, the list goes on... They serve a number of purposes.

he didnt say anything to me, so i dont really feel the need to, but thanks for the suggestion

tride
Posts: 1038 - Karma: 17
Karma: 17
Posts: 1038
Insane
That's like asking if there is a use for buckling your boots.
Just like skiing without poles, skiing with your boots undone is totally possible, and is also a good way to develop better balance.
And, just like buckling your boots, you are able to ski better with poles, than you are without them.
Sure, Hugo Harrison could shred an Alaskan spine without poles, but he will shred it better with poles.
Hermann Maier could make it down the Hannenkahm downhill without poles, but he will do it substantially faster with poles (even though he will not likely pole plant even once).
Mike Henitiuk could rip down a Nor-Am mogul course without poles, but he will get down much better with poles.
The entire field of the Dew Tour could have gotten through the slopestyle course and the pipe without using poles, but they are able to ski that much better with poles, so they used them.
Plain and simply, using poles is a more performance oriented way to ski than skiing without poles.
So, you may want to change your question - "Is there a NEED for poles"? Well, no, it is totally possible to ski without them. "Is there a NEED to buckle your boots"? Same answer, skiing is possible without doing them up.
Personally I have nothing against people who don't use poles, to each his own, but people who "hate poles" or say things like "poles are a park skiers worst enemy" really confuse me.
I've seen people rip parks without poles, but never to the extent that someone like TJ or Jon or PK or Henrik etc. does with poles.
Dec 29 2008 12:08PM 0 0 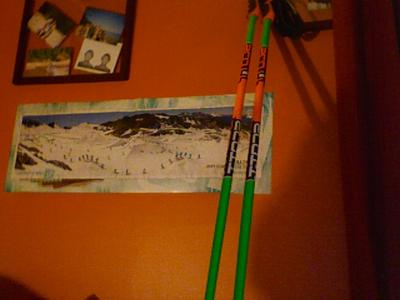 Mooserz
Posts: 2945 - Karma: 32
Karma: 32
Posts: 2945
Addict
I saw a board with two Armada stickers on it so naturally I thought he bi-snowsportual~ I went over and asked him if he skied and hes like uhhhh no why in the world would I? I proceeded to point out the two armada stickers on his board and he got all defensive saying that their a clothing company~ I was like alright buddy

GOODER
Posts: 42 - Karma: 13
Karma: 13
Posts: 42
Lame
i used to work in ski school and sking without poles isn't bad its just for training. and unless your in a comp i guess your training so peronally i think when ever your learning new tricks i find sking without poles is a great learning process, but sking is ment to be done with poles and thats pretty much that.
Dec 29 2008 11:18PM 0 0

I use one of my spare poles to hold up the hood on my car because the hydrolics dont work in the winter.