Worst rail jam set up ever.

*208*shill
Posts: 742 - Karma: 149
Karma: 149
Posts: 742
Ridiculous
at bogus today they had a rail jam that was terrible i was entering up until i saw the set up
it was placed at the bottom of a main run that was very steep and had a rail sloped down and gave the skiers a 2 sec reaction time from the platform to the rail the 3 sec after maybe was a crappy battleship rail(up flat down) then next to that was the best feature there a barrel sticking up to jib (which some kids did some sick stuff off) and then at the end a huge (crappy) black barrel type thing
and the entry fee was 25$ it was the stupidest thing ive ever seen ! terrible job bogus basin!
Fuck bogus go to tamarack!
Dec 26 2008 11:43PM 0 0

one of the things he made was a c rail out of an old tree....

psizzle
Posts: 1283 - Karma: 398
Karma: 398
Posts: 1283
Insane
i wouldnt be so upset, at my mtn in upstate NY they hav terrible setups, couple weekends ago there rail jam was a 15 ft down box to either a log or tire stall BEAT, except $25 is pretty ridiculous

hyphy_skier
Posts: 2 - Karma: 10
Karma: 10
Posts: 2
Newb
sounds preaty shity, but atleast they have a set up my mountian doesnt even have one rail set up yet...

your mountains name is bogus?

sykonaut
Posts: 346 - Karma: 11
Karma: 11
Posts: 346
Loner
Eh not much better then ours.
1 Down Box rail.
Kicker to Barrel.
Then a picnic table at the end.
It was even sponsored by Salomon. Atleast we have jams now though.

Canuker
Posts: 4730 - Karma: 160
Karma: 160
Posts: 4730
No Life
same with my park director except they make weird ass shit thats sick. The crew switches around the features like every week or two to keep things fesh and theres always something new and creative to hit. 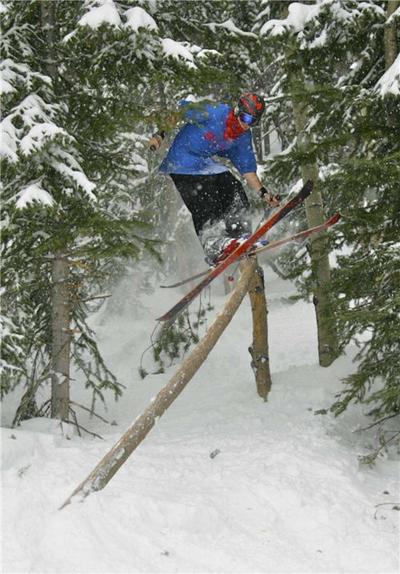 was it Mountain Life who was taking them or that one dude who used to take photos up at Bogey Peak? i dont think Mountain Life does Bogus now that i think about it.