Colorado Bluehouse Demo's Check it Out!

TravelsTI
Posts: 1000 - Karma: 353
Karma: 353
Posts: 1000
Insane
What's up guys, just to let you know all of the graphics and info have been released for this years lineup of Bluehouse Skis. I will be in Vail, Breck, Copper, Keystone, and possibly Steamboat this winter giving people an opportunity to try out Bluehouse skis before purchasing them. Please get in touch with me if you are interested and we can figure out a schedule for the winter season. My email is cking.bluehouse@gmail.com, feel free to contact me with any questions you might have. Winter is almost here so be excited to try some of the best new skis introduced to the market this year. 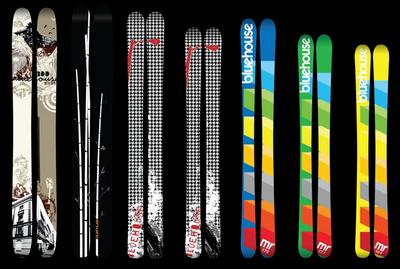 Skis from left to right:

The Maven- a reverse camber backcountry pow ski that is stiffer than other ones on the market such as the EP Pro or the Hellbent. For any of you that rode the districts last year the stiffness is fairly equal to those. They are 189 in length and the dimensions are 152-132-150 or close to that. More info later this week.

The Shoot- Fair warning: The Shoots is not for the novice skier. Some of the words used by testers to describe The Shoots’ personality were “charging,” “made for speed,” “weapons,” “killer-blaster” (a BH favorite), and “for serious screaming.” The Shoots brags the stiffest flex of all the BH fleet. The profile was designed to deliver comfort at top speeds. The rockered tips will keep your skis afloat any snow type and the nearly-flat tail will direct you where you want to go: downhill. In other words, The Shoots were bred for straightlining. Bluehouse felt it appropriate to name the ski after the bamboo plant’s growing pattern, but also likes the subtle reminder to its owner that this ski belongs in the chutes and similar terrain. The graphics were created by Simen Stori during the design contest last season. The art fit perfectly with Bluehouse’s plans for the ski. Enjoy The Shoots. They are 191 in length and measure 149-128-133.

The District- The 2008 Bluehouse District is tougher and more versatile. It also comes in two lengths: 187 and 176. We had an overwhelming request last season to stiffen the District, and that’s what we’ve done. We promise less chatter on hard pack, more stability at top speeds, and less back-seat riding on the stomp. The red light from last year’s District was the most talked about part of the graphic. It’s the main graphic feature for this season. Just like the MR, the District has rounded top edges and a tougher top layer to cut down on chipping. Enjoy. The specs are 134-108-122 for the 187 and 134-103-122 for the 176.
The MR-The most maneuverable and lightweight park ski from Bluehouse is back and it comes in three lengths for 2008: 179, 171, and the new 164. The 2008 MR has been enhanced from its original design with stiffer flex in the tail for more comfortable stomping. The new MR has a rounded top edge and more durable top layer to reduce chipping. This year’s design will definitely get you noticed as you show your steeze in the pipe, on the rails, and off the booters. Enjoy.

Hope thats enough info for you guys, and again feel free to ask me any questions.