DeakleMatter
Posts: 335 - Karma: 10
Karma: 10
Posts: 335
Loner
if you're bored or interested, stick around for i promise you won't be disappointed. let me know your thoughts!

Gt is saying it’s not her fault nobody likes Paige, and is implying that it’s mine and Asher’s fault that “everybody hates (her)”. She also says that Paige tell us stuff about her and the other two (Madison and graci) to make us hate them. So I had something to say:

D: Whos Mother Fuckin’ fault is it grace? Me? Asher? The man on the mother fuckin moon!? She doesn’t tell us shit about you all! We used to be on your side, we all used to agree. But then Paige changed and we tried to get y’all together again. And she was ignored. If she hung out with us all you were fake as fuck. The way you 3 treated her was fucking wrong. She ditched you for chad because he was real to her. He didn’t put on a show and was an ass. But he wasn’t fake! So I’d take 2 chads for each one of you fake ass bitches, and that’s the fuckin truth. You wanna tell me it’s my fault people hate you? I don’t talk about this to anyone but Asher, but if you’re going to play innocent I can really start to spread shit and make people hate you. I haven’t started a damn thing about you and I never wanted to. But if you want to fuckin play innocent then I can fuck you over real quick bitch. You think I’m playin? Mother fuckin try me.

GT: I didn’t say it was your fault!

(Later in the day once phone was charged)

D: You didn’t have to grace. the fact is she messed up and tried to fix it, and you 3 wouldn’t forgive her, especially graci. We’d be at her house and if you guys came it would be awkward or you’d leave early or even get into fights. And that’s IF you came! So she ditched you for chad because even though he treated her like shit most of the time, at least it wasn’t the whole time. So she did try grace, and it was hard for her. I got mad because you were being so sarcastic and acting like you had nothing to do with it. I’m sorry I went off like I did, and before all that I did not nor do I hate you! I just don’t like the way you talk about Paige ditching you for chad when you are with will, graci is with her bf, and Madison is with rus. That made me the maddest. But I know that all that hit you pretty hard and I think it’s commendable of you for trying to fix it. So thank you for finally seeing what we see, and hopefully all this will be behind us soon.ill talk to you later grace. Bye.

GT: I deleted all those messages. U blew up on me for no fucking reason.. this doesn’t concern you at all.. I just wish you would look straight forward when I see u in the hallway.. because I know I will..

D: I blew up on you because you were acting like you had nothing to do with her being miserable. And saying she’s the “innocent fucking girl we think she is”. Asher has all the messages if you’d like to get them. But I don’t just blow up on people for the hell of it.

D: You don’t remember telling me at the pool how you would never talk to her again or apologize because she hung up on you? I tried to say something and you were like hell no, fuck that. And I just quit because you weren’t going to change your mind there. That’s all I’m talking about.

GT: Hey I know both sides are wrong. I’m not ignorant. But seriously don’t waste your breath on me.

D: Waste my breath?? It obviously wasn’t wasted because you called and tried to fix things! That’s all I wanted!

D: Id like to think you’re saying that because you’re mad, but when you cool off think about it and know if you were being alienated, id do the same for you.

G: oh so you think it’s your place to cuss grace out like she did something to you? I know all of us are at fault. It’s complicated enough with u addin to it.

D: I was just justifying my reasons with facts. And if I’m not mistaken, Paige is my friend too. Its great you’re taking up for GT and that she told you what I said about you, but I did the exact same thing. She was texting Asher, and I had something to say, just like you are now.

GT: No fuck it deak. I’m not the only one who’s lost all respect for you. I have never been talked to the way you talked to me today. I thought Asher was bad.

D: I do not get offended by people telling me I’m a bad person. I don’t need anyone’s respect who doesn’t want it. But know this…I cared so much about my friend, I went out of my way to make my feelings felt. Call me whatever, but I was just being a good friend and if it means you won’t speak to me fine, but at least you’re trying to fix things with her because SHES the one that needs you. I have plenty of friends I can depend on, and I’m sorry it’s come to this. But I’m not mad.

wow i have never understood how people take themselves siriously enough to talk like that..

DeakleMatter
Posts: 335 - Karma: 10
Karma: 10
Posts: 335
Loner
look, im bored. i just got in a big argument with this bitch. im a senior and i fuckin hate drama. the only reason i posted this is because once again, im bored. if you read the shit then you obviously give a fuck or you're bored too! so you're welcome for providing you entertainment or wasting that 9 minutes it took you to read it. either way, you read the "high school drama" post on your own. if i'd called it "bitch pwned" i would've gotten a completely different response. and yes, my name is hansel. get on my level. your pants mother fuckin suck!

+1 lot of reading for alot of nothing. 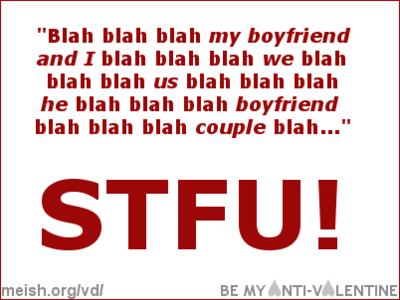