espong1321
Posts: 763 - Karma: 10
Karma: 10
Posts: 763
Ridiculous
wileys sick as fuck, jermo kills, hornbeck KDAY and barnes are just way to roofless and murder everything that moves under their skis max tosh session as hard as they puff dlite rasT,albino, beaujosbyron, and on and on and on
Jul 25 2006 2:48AM 0 0

mattwalker
Posts: 5063 - Karma: 2,472
Karma: 2,472
Posts: 5063
No Life
every skier you mentioned is from east coast... i have never ridden BC with them but i doubt they are really good at it or big park jumps, (except for decker, who moved out west and started slaying BC this year with berman) just simply because you dont have it out there. Same with us, we have done every rail that we could find in our valley... we dont have citys full of them.... and none of us have snowmobiles... Now i have seen ahmet do urban, and it is absolutley insane, same with the rest of that crew, giray, pat cowan, ced...etc way better than any west coast am i can think of at urban with the possible exception of hornbeck... but thats the game out there, u guys do urbans in the middle of the day in the city because its there, we ski park, hit tables, spin around on boxes, have fun in the park... because its there, close and fun. we do urbans and BC, just not as much, this year i want to a lot more... when it boils down to it, everybody just reps their friends in these threads, but from the kids i dont ski with on a daily basis... ahmet, hornbeck, decker and logan, wiley miller for BC, will wesson, clarke, LJ, max and tosh peters, pat cowan, frank raymond, alexis, adam D... everybody constitues a best am in their own way, the hard part is being the best in everything, and its hard for kids that cant travel to new places to get good at different stuff... i would say cosco is good too but that brown kid sucks hahahaha. yea and the other thing, all these kids claim these AM's that nobody knows about but nobody ever has proof... i want to see a kid as good as anybody i have mentioned that nobody on here has heard of...
Jul 25 2006 3:13AM 0 0

KurraK
Posts: 162 - Karma: 254
Karma: 254
Posts: 162
Pro
what about people from Norway/Sweden! Some of the skiers in the Field crew is fuckin' sick! E.Sigstad,Espen Linnerud,Stian BB,christopher Frankum just to mention a few!

wiglaf
Posts: 4876 - Karma: 121
Karma: 121
Posts: 4876
No Life
and Andy is right... there are plenty of kids out there that are just as good or better then the same 5 kids that keep popping up in this little world of ns threads.
There are kids out there from allover the world..

Why don’t any euros or even that many french canadians ever get brought up? maybe its b/c they don’t sit on NS and post in every thread creating a name and hype for themselves...

Ahmets_Brother
Posts: 20266 - Karma: 5,224
Karma: 5,224
Posts: 20266
@th1337
simon from meatheads. and then theres guys like bernie, and garret that kill park and bc. and walker, what you say is far from the truth. i like east coast park shit (other than jumps) better than what ive skied in the west so far. but the east does have its big jumps. mount snow use to build a jump anywhere from 60-80 over a few seasons. and as for bc/powder/trees and that type of stuff, theres more going on in the east than what you think. plenty of mountains get the same amount of snow as in colorado, but not quite as good of snow. that doesnt mean that east coasters arent shredding that shit when they have the chance
Jul 25 2006 1:56PM 0 0

mattwalker
Posts: 5063 - Karma: 2,472
Karma: 2,472
Posts: 5063
No Life
yea i forgot the euros, that 3 for flinching movie looks way sick, and i believe i mentioned quebecers, alexi and frank raymond are so sick... and fetus fuck you, you are exactly what i am talking about, show me a video of one, just one, not this whole crew that your talking about... one kid that is better than any of the kids mentioned that nobody has ever heard of except you... and the reason why i am on NS is because i have nothing else to do, i am in a cast chillen so i cant work, and i just got my new laptop for school, and i am bored...
Jul 25 2006 3:38PM 0 0 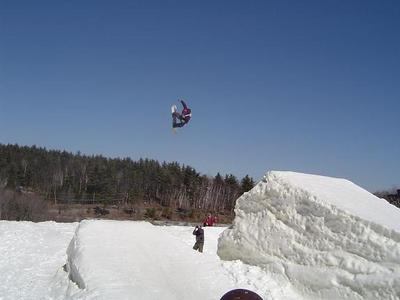 second off, you need to open your fucking eyes. when ahve you seen walker or i ski backcoutnry, or urban for that matter? never, there are a shitload of people that are sick in the industry and i think tis all about personal preference on "whos better then who" some people would say dumont is better then sammy, but sammy is better then dumont in many aspects....its all opinion
Jul 25 2006 5:23PM 0 0

walker blew up thanks to YGO.

Two...
When did I ever mention anything about your out of the park abilities??? I believe mr walker was the one that made the retarded statement of calling out like 6 people he doesn’t know or ride with on that one…

pinner-
Posts: 1398 - Karma: 74
Karma: 74
Posts: 1398
Insane
you guys are forgetting about all western canada. none of you have mentioned anythign about anyone from there.

edmonton_skier
Posts: 3210 - Karma: 97
Karma: 97
Posts: 3210
Addict
mike riddle along is everyone here is killing it. and i dont think anyone here is hyping themself up... posting in a thread that 200 kids MAYBE will see and porbably not even completely read so that they can clear up some misunderstood imformation is not Hyping yourself up... its called posting a skiing site on the internet. if someone remembers their screen name its not a crime
Jul 26 2006 12:57AM 0 0

mattwalker
Posts: 5063 - Karma: 2,472
Karma: 2,472
Posts: 5063
No Life
the difference between you and any other people on this is you and misty 7 talk shit, you dont ski very much or post on anything else, but then these threads pop up and you go nuts. you just talk shit on anybody not from the east coast... fuck even the kids you are hyping as good AMs are hating on you for being a deuschbag... all i have done in this thread is give good kids props, and just because i didnt mention that some of those 6 kids kill it outside the park you go bonkers. I am sorry, all those EC kids must straight slay BC and would kill AK, including yourself!!! i was only going off what my good buddy clarke has told me about his EC skiing experience, and that went something like, man i have skied pow twice on the east coast and it sucked... ? dont call me retarted for not giving somebody props.
Jul 26 2006 12:58AM 0 0

chugLIFE
Posts: 4714 - Karma: 1,050
Karma: 1,050
Posts: 4714
No Life
ummm search cosco in members...thats my original name....i changed it to $MiniCHugga$...then i thought i sort of out grew that? dollar sign mini chugga dollar sign? little kid shit, which iw as when i amde it so i thought hey what should i change it to oh i know maybe i'll make my userNAME, my NAME!? WHAT A FUCKING CONCEPT!