geib
Posts: 579
Karma: 44903
Posts: 579
Ridiculous
I just found a really cool lens from my dads old film camera, and it just so happens to be an EF mount so it fits on my camera. I dont know the details but im going to try it out tomorrow, has anyone had experience with these kind of lenses? Cool or just unfunctional?
Oct 4 2017 10:44PM

nutz.
Posts: 3149
Karma: 164223
Posts: 3149
Addict
Depends on the lens! At the production house I worked at we used a lot of contax zeiss lenses and those are awesome - there's a guide on reduser that gives you more info on them/how to pick them and all that.


https://www.newschoolers.com/videos/watch/877447/Spitfire-Athlete
I'm pretty sure those were used on this shoot.

bai.
Posts: 21
Karma: 538
Posts: 21
Lame
Yes dude! I pretty much use only SLR lenses. It definitely has a style, but the glass is usually wicked (I've taken some big falls / dropped my set up more than enough times).
I've been working it for about 6 years this way so you get into the groove of manually focusing, takes a little practice.
Oct 6 2017 12:44PM

emrenThe only issue I've had with old lenses is that they only work on manual focus or they're prime. It makes using them extra effort, but it does add a rad style to videos and photos

Yeah, but for video, manual focus is preferred. especially on DSLR's where the auto focus is SKETCHY at best in the field - particularly with slower glass.

skiP.E.I.
Posts: 5392
Karma: 338987
Posts: 5392
No Life
I use exclusively manual Nikon prime lenses. Straightforward to use, good optics, durable, sharp and give a slew of subtle unique effects. My advice is to try any lens you find that you can somehow get on to your camera and just see what it does.
Oct 8 2017 9:41AM

lelandbroadhurstLoving This thread tbh.
Anybody found any wide lenses That'll fit either natively on a Nikon or can be adapter to a Nikon?

Any F mount nikon lens will fit a nikon DSLR. One thing to watch out for is there's a small, moving tab right above the lens mount on some DSLRs that fits in the aperture ring. Many old nikon lenses have a correspondingly notched aperture ring that works fine on the camera and tells the camera what the f-stop is, but some older Nikkors have an aperture ring that's a single depth all the way around. These can be modified fairly easily by removing the aperture ring and filing out a section to fit. I have done this successfully as shown:
my Nikkor 85mm (first pic) has the factory aperture ring which is compatible with modern DSLRs (ex. D7000) aperture tab. The second picture of my 135mm shows the notch I filed in to the uniform-depth "scallop shell" aperture ring so it would fit on my camera.
Another thing to keep in mind are that these older Nikon lenses are full-frame lenses, (designed for 35mm SLR cameras), so on a crop-sensor DSLR, their focal length is magnified by roughly 1.5x (50mm= 75mm) and the maximum aperture will be about a stop larger.
This is extra fun if you are lucky enough to have both a full frame and a crop sensor DSLR, as you essentially have two sets of lenses in one. 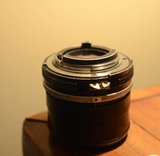 Only thing old lenses don't fulfill is the nice wide lens. They made them, they're insanely expensive and not better than any modern wide lens.