YourMomsCouch
Posts: 311 - Karma: 4,038
Karma: 4,038
Posts: 311
Loner
So I just found out that in my hometown there were two violent teen suicides within just two days of each other. A girl who was the ex chief of police's daughter shot herself in the head while her family was home, and another unidentified kid jumped in front of an oncoming train. Im not too sure if these are both suicides, seeing as the town has a huge gang problem, but either way they're both pretty messed up ways to go. Share your thoughts ns
Mar 15 2014 9:02AM 253 214

freestyler540
Posts: 11748 - Karma: 5,857
Karma: 5,857
Posts: 11748
Crazy Fool
I went through suicidal thoughts a few times in my life. Most were based on failures at school and the stress of deadlines. There is no feeling of worthiness as I picked up C's and F's; as A's were rare. This is stage 1.
When I graduated college, I had a junior position at my first job and the boss was an asshole. He fired me, my parents had fun rubbing it in and I broke up with my first girlfriend. That cost me a year of depression; 16hrs of sleep a day, 75$ a week for food and getting around was painful. At that time, I wanted to die and nobody was there to listen. I was scared of the help because I wanted no pity or condescension.

This is where most stories will end. If I was a teen, I would not be able to bounce back. In fact, most don't. The growth in the brain shifts hormone levels and an underdeveloped frontal cortex inhibits certain rational adult thoughts.

Just listen if someone talks depression. That is the first step of helping someone come back from depression.

Willgum
Posts: 3241 - Karma: 2,939
Karma: 2,939
Posts: 3241
Addict
There's going to be alot of people who dont understand depression in this thread with ignorant ideas to share. I've never been depressed but I can at least empathize that its not just feeling sad for a couple days, it takes over your life. Telling someone who's depressed to just cheer up, go on a vacation, skydive, learn a new hobby etc... wont always work and whenever I hear someone committed suicide I feel sadness, not disdain because of a "selfish" act. People end their lives because they're living in a personal hell, not because they're selfish or need attention.

Willgum
Posts: 3241 - Karma: 2,939
Karma: 2,939
Posts: 3241
Addict
Oh btw im not condoning suicide just want people to be more open. Also here's some copypasta from reddit of a guy with a very convincing argument to depressed teens
Not my writing

When I was 16 I actually sat down and made two lists. One was reasons to die, one was reasons to live. Though the reasons to die (or I should say, what I thought at that time were reasons to die) was by far the longer list, I chose not to do it.
I will be fifty in two months. While I've had ups and downs in adulthood I have had experiences and I have learned things that I would have missed if I went by the longer list when I was 16.
I joined the Navy. I've raised two kids to adulthood. I've rafted whitewater. I've rock climbed. I've loved and lost and loved and lost and loved again, and am now married to a women who I can truly say is my soulmate.
I was in my late thirties before I started learning to play guitar.
I turned 49 before I decided that what I really want to do when I grow up is be a writer.
Heck, I play video games that my 16 year old self would have thought were science fiction and I don't even have a current gen console.
I saw my first cassette tape Walkman when I was nineteen and thought it was amazing that I could listen to an actual cassette tape on the go for the four hours that the AAA batteries lasted. Now I have more than a thousand songs on a $35 mp3 player that is functionally beyond the iPods of just five years ago.
I can log onto a worldwide communication vehicle like Reddit and get to know people from every point in the known sentient universe.
What will I be amazed at tomorrow? What will I be amazed at 10, 20, hopefully thirty years from now?
I want to see what comes next. I want you to see it with us.
There will be ups and downs, but trust me... you don't want to miss it.
Mar 15 2014 1:13PM 12 0

chicken
Posts: 6821 - Karma: 2,085
Karma: 2,085
Posts: 6821
No Life
meh. I just don't really give a shit that privileged people from america are killing themselves. maybe if they ate healthier food and exercised often they wouldn't feel so shitty. seriously have you ever met a "depressed" person who ate healthy and got lots of exercise?

if you want to kill yourself that is your own fucking problem. like a family member or something could try and help them but society as a whole shouldn't give a fuck. There are way to many people and animals in the world who actually have super shitty lives and it's because of our selfish western culture. So basically I care more about helping them than some dumb kid who get depressed for no reason.
Mar 15 2014 1:40PM 4 21

mellifluous
Posts: 1682 - Karma: 64
Karma: 64
Posts: 1682
Insane
It makes me really uncomfortable to read some of the responses in this thread, as somebody who has had multiple attempts.
I guess people being open-minded and at the very least marginally sympathetic or compassionate towards others who are experiencing difficulty is too much to ask for. Yikes.
Mar 15 2014 2:04PM 0 0

he was like: "500,000 people kill themselves each year while 200,000 get killed in war. so a lonely evening at home with a bottle of wine is more dangerous than a casual walk through bagdad." 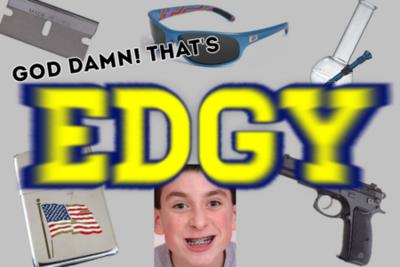 SmotSmoke
Posts: 599 - Karma: 2,724
Karma: 2,724
Posts: 599
Ridiculous
Obviously there is something wrong with someones judgement when they think their life is so bad they have to kill themselves. Depression is a serious problem and sometimes people can't deal with it themselves. If depression/mental illnesses goes unchecked it can lead to suicides, or irrational behaviors. You don't know what kind of emotions a person who commits suicide is going through.
When you know someone that has completed manny exceptional things in their lives and you have seen them live happily and complete anything they put their head to commit suicide it doesn't seem to make sense especially when you have seen the person enjoy life at such a high level.
Suicide isn't right and the people who are in such deep depression need help. Suicide is not a cowardly act. Its a permanent end to a life and I am sure that the people who go through with the act are suffering greatly psychologically.
Take greater care in assessing your judgements.
Mar 16 2014 12:58AM 2 1

theabortionator
Posts: 45747 - Karma: 94,948
Karma: 94,948
Posts: 45747
Basement Dweller
Also the help isn't always helpful. Somebody could be down with getting help, be completely honest in meetings with counselors in school, and then have some cunt say that they're crazy "A danger to themselves and others" and try to have them locked up in a psychiatric ward twice.

theabortionator
Posts: 45747 - Karma: 94,948
Karma: 94,948
Posts: 45747
Basement Dweller
Trip post. There's a time to troll and a time not to. Not that the OMG OMG IM VEGAN AND LOVE ANIMALS routine isn't a little played anyway, but could you at least keep it to random bullshit threads?

theabortionator
Posts: 45747 - Karma: 94,948
Karma: 94,948
Posts: 45747
Basement Dweller
I'm talking about his "trolling". I feel there's a time and a place in terms of threads for it and that it's unnecessary in this thread. Especially if it's already played even in the bullshit threads.