jeremy.g
Posts: 4931 - Karma: 463
Karma: 463
Posts: 4931
No Life
damn this is retarded. those photos you see of evolution from the hunched over ape, to the upright human are competely inaccurate. evolution is more like a tree. Monkeys and homosapiens have a common ancestor that we both branched off from. we didnt descend from monkey, both species evolved from something in the past. and scientific theories are hypothesis that are supported by evidence, if a hypothesis has enough provable evidence it becomes a theory. also there is no reputable debate in the scientific community on evolution. its a proven fact. they can even carry out computer modulations and studies on microscopic communities of tiny germs and things that live out thousands of generations very rapidly and see evolution as generations go by.
so kindly shut. the. fuck. up.
Feb 4 2014 6:53PM 6 2

theBearJew
Posts: 10951 - Karma: 15,597
Karma: 15,597
Posts: 10951
Crazy Fool
I was in Israel on a super religious trip (wasn't expecting it to be crazy religious) and this guy Gerald Schroeder talked to us about the big bang and religion. He was trying to say that basically the big bang happened and it was created by god. Everything that is said in the Old Testament happened in a time period, but just not in a 24 hour time period. This is because time is relative and after the big bang it "stretched" time.


This was the graphic he came up with and shows a bit more of what I am talking about. 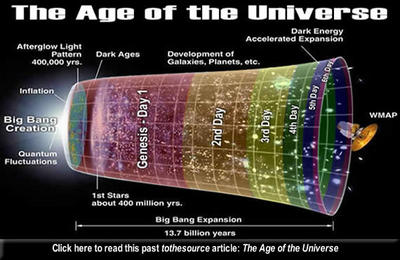 He basically said if you look at fossils it will show you that the things in the "first day" were created during the time period show above for the "first day" and so forth on each day.

theabortionator
Posts: 47351 - Karma: 111,822
Karma: 111,822
Posts: 47351
Basement Dweller
I mean I'm open to a debate with evolution but creationism really doesn't have any ground to stand on these days. I mean anythings possible but that doesn't mean it's a legitimate argument.

no one said people who think the earth is only 6000 years old can't do modern science.

and the thing he just said about the e. coli was stupid.

That to me is the problem with these kinds of people. They are closed minded and thing they are right, anything else is wrong.
Feb 4 2014 7:40PM 0 1 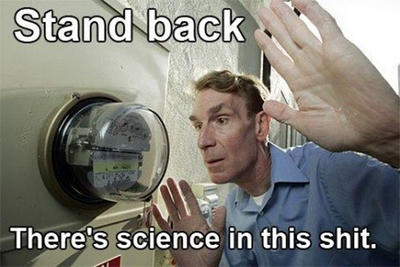 Charlie_Kelly
Posts: 11831 - Karma: 10,839
Karma: 10,839
Posts: 11831
Crazy Fool
But see if its presented in a logical way, with clear explanations, I will always entertain that idea. I mean, technically we can't prove the big bang created our universe, and we also cant prove "God" didn't create the universe. But one sounds much more absurd than the other. This though, this is way more plausible than what other religious zealots (and the Bible, Torah, Quran) state. All I'm saying is its pretty easy to trace where religion came from (aka people that didn't know the natural workings of the earth)but Im not going to bash people for believing what they believe, its just a little ridiculous we are having this debate now, in the heat of unparalleled technological advancement and the decline in religious following.
Feb 4 2014 7:44PM 0 0

I just wish Bruno Latour would stand up give Ham an education in science theory and history.

The guy was very insightful really awesome to listen to. It was great to hear what he had to say about the topic and was a ideology that I had never thought of nor had it ever been presented to me.

Charlie_Kelly
Posts: 11831 - Karma: 10,839
Karma: 10,839
Posts: 11831
Crazy Fool
This. We have evidence to support the big bang. We have zero evidence to support a "God". The only god theory I would consider entertaining is that extraterrestrials did visit a younger earth and the humans of earth saw these people as god figures. Now that theory is crazy but still holds more weight than the bible.
Feb 4 2014 7:49PM 2 3

Bill: I challenge you to prove me wrong, find something that proves me wrong and we will embrace you.

Dr.Dealgood
Posts: 2587 - Karma: 1,341
Karma: 1,341
Posts: 2587
Addict
To my knowledge, the big bang is pretty dang consistently accepted as true. The bigger question is what the hell was going on before? But I'm not a huge physics person, maybe Dr. Zoidberg or someone can clear that up.

The god particle part was more a generic term, not pertaining to religion, but to its hoped/anticipated ability to tie things together.
Feb 4 2014 7:55PM 0 0 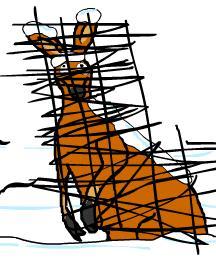 I'll reiterate what i have already said in another thread. This scientifically sound world that we live in, governed by laws and theories, it doesn't make any sense that there should be any God and whenever I ponder such ideas that organized religion brings forth, and compare it to just, the world (in all its solidity) it just doesn't make sense.

Sounds like a genius idea for pandering and crowd control, but other than that it's supreme bullshit. It fucking pisses me off that these debates are going on.
Feb 4 2014 8:01PM 3 4
All times are Eastern (-4)