It’s late April at Keystone, Colorado, and, under light blue skies interrupted only by a few puffy clouds, Maude Raymond and Tiril Sjåstad Christiansen are sessioning a private park during a rare women’s-only photoshoot. In spite of a breeze, the two ladies are trading tricks on a step over that’s 65 feet to the sweet spot. Christiansen lands a switch 10 tail grab after doing forward and switch 9s. Raymond tries a different grab on her 9s.

The following day, Keri Herman, fresh off the plane from an NBC Olympics shoot in LA, joins them. The trio migrates to a bigger jump. It’s 75 feet to the knuckle and after a few smooth tries, Christiansen goes too big, over-rotates and lands on her hip and hand. Herman and Raymond continue to session, moving from feature to feature until sunset. I miss all that as I drive Christiansen to the Vail Valley Medical Center where X-rays confirm that her hand is broken in three places. She’ll need surgery back home in Norway. The shoot’s over for Christiansen and so is her career long injury-free run. 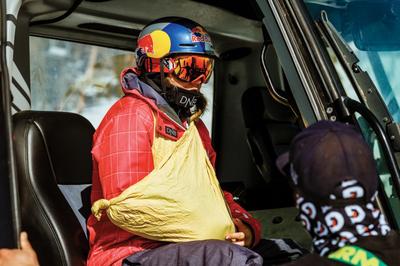 “It’s part of the game,” says Herman, 30. “It happens to all of us. Injuries make you think twice about pushing the limits, but you get it back.” Last season seemed particularly injury plagued for the women of freeskiing, though.

Grete Eliassen was practicing for Dew Tour at Killington, VT on a particularly windy day in January 2012 when she knuckled the bottom feature and blew her knee. “If [the jump] was smaller, it wouldn’t have happened,” says Eliassen. “Jump size is 100 percent the reason why girls are getting hurt. It’s hard to progress the sport when you’re thinking about just surviving. I’d be trying new things if jumps were smaller.”

Wint blew her ACL in December, 2012 at the Dew Tour at Breckenridge, when she came up short on a 67-foot booter. She had already cleared the jump multiple times, and she says the jump’s size wasn’t the issue. The problem was the blizzard conditions during competition.

As female slopestyle skiers prepare for their Olympic debut, more and more are advocating for smaller jumps or separate takeoffs to combat the discipline’s growing injury rate, and to promote progression. It’s a controversial topic that some worry is a step backwards after women like Sarah Burke worked so hard to establish equal participation, prize money and exposure.

What are your thoughts on the current state of slopestyle courses?

During the women’s shoot at Keystone, Christiansen and Raymond discussed their contrary opinions. Christiansen is a fan of big jumps. The 18-year-old Norwegian, fresh off an incredibly successful rookie year that included X Games slopestyle gold, hadn’t been injured until the broken hand. She says the only courses she encountered this year in which the jumps were too big were in Whistler and Norway. Raymond, 25, and Freeskier’s 2013 Skier of the Year, started skiing in her native Québec at age 18, after competitively diving and ski racing. Six months after she hit the park, she was landing cork 10s. Six months later, she blew both ACLs and was out for a year and half. She’s broken her ankle, ribs, collarbone and back. She’s undergone eight knee surgeries in six years.

“I think women’s slope is progressing, but not at all like it should be,” said Raymond. “How can you progress a sport with two-thirds of the field out due to injury? The progression is not happening because we have huge jumps. The girls are doing 3s when they could be doing cork 9s. Everyone is for big jumps until they get hurt. If we had smaller jumps, girls would be trying cork 10s instead of just focusing on carrying enough speed to clear the jump.”

Almost two years ago, Kristi Leskinen, with the help of We Are Snowboarding and the Association of Freeskiing Professionals, polled top male and female slopestyle skiers and snowboarders to assess their satisfaction with slopestyle courses. Ninety of them completed the anonymous survey with roughly equal representation from genders. “The survey showed that men and women actually want very different things when it comes to jump sizes and would certainly benefit from changes to current courses,” says Leskinen.

The average ideal jump size from the 40 women who filled out the survey was 55 feet, while the men polled wanted an average of 69 feet.

“Sarah Burke always hit the bigger jumps, so others presume she never would have advocated for separate takeoffs.” (See Sarah’s survey responses below.)

Leskinen assumed people would acknowledge the findings as legitimate, but the survey didn’t gain the traction she expected. Even when ESPN published the results, the title marginalized the findings: “Leskinen Vies for Smaller Jumps.” Backlash ensued. Snowboarder and X Games slopestyle medalist Spencer O’Brien argued that building smaller jumps for women would push the sport backwards. And, as is often the case, the loudest voices seemed to overwhelm the majority who had responded anonymously.

The late Sarah Burke was among those whose response was not linked to her name. She suffered many injuries from contests, including a broken back on a slopestyle course and broken nose from decking in the halfpipe. A lot of people guess what Burke would say. She always hit the bigger jumps, so others presume she never would have advocated for separate takeoffs. According to Leskinen, Burke and Turski helped her come up with the survey questions and were the first two people to fill out the form. With her husband Rory Bushfield’s permission, here are Burke’s survey results:

Q: What is the most common concern about the course at events?

Q: What is your ideal contest jump size?

Q: How do you feel about the current jump sizes at major contests?

SB: They’re a little big. I would be more likely to do harder tricks if the jumps were smaller.

Q: Do you think having jump options would add to progression for both men and women?

“[Burke’s] survey results are right at the average,” says Leskinen. “She was never one to back down and could always step up to the plate, but her answers speak for themselves. It’s about stepping up the level of progression and increasing the number of girls competing.”

“Sarah worked really hard at getting female skiing where it is,” says Bushfield. “If the majority wants it, well then that’s what should happen, but I would hate the girls to not be able to do an event because there isn’t a separate course. I just don’t want anything that Sarah did to move backwards. I don’t know if Sarah wanted smaller jumps. She wanted the sport to progress to the best level it could. Maybe that’s not necessarily smaller jumps, maybe that’s just safer jumps.”

At the FIS Freestyle World Ski Championships in Voss, Norway, the jumps were 82, 72 and 65 feet. Even Keri Herman, who has an affinity for large jumps, says some contest jumps are just too big. “We don’t need 80-foot jumps,” says Herman. “Big jumps are badass, but yes, having smaller jumps is going to help us not be afraid and try new things. For contest jumps, there needs to be a happy medium that we can all safely ski.” 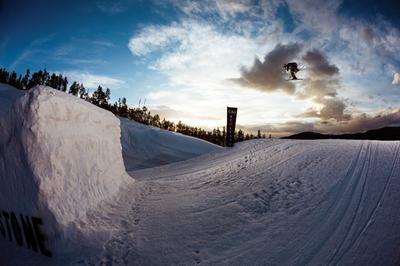 Although some ski competitors promote a maximum jump size, Herman says standardizing anything in freeskiing takes away from the sport’s creativity. Dan Skivington, ski competition director for the Dew Tour agrees. “I think we should leave the free in freeskiing,” he says. “I believe the progression of the sport should never have rules on it.” If a compromise on jump size between the men and women can’t be reached, many female slopestyle skiers see the benefit in building alternative takeoffs—lips 10 or 15 feet closer—to make existing course features safer.