p-fo
Posts: 9372 - Karma: 6,108
Karma: 6,108
Posts: 9372
Crazy Fool
I think this would work better from the other direction: 3D printed liners.
If you could engineer a 3D printable material for liners that doesn't feel like a rubber glove on your foot, that would be even better, since you could make its dimensions to fit standard shells. So say your foot size is between 26.5 and 27.5. You could get a 27.5 shell and then print a liner that fills the shell and fits your foot snugly. I think that would be more useful. Just a matter of cost to design and make it.
Feb 3 2014 5:13PM 18 3

Tree60
Posts: 1438 - Karma: 4,961
Karma: 4,961
Posts: 1438
Insane
You wouldn't print the buckles and everything, just like the buckles aren't in the molds that are used today. A boot wouldn't be all that hard to print because its plastic, which is the issue with printing liners. A material that is usable in a 3d printer and feels like what they use for liners right now is either very hard, or impossible at the moment, we'll have to see where the tech goes.
I do think some iteration of this is definitely in the future for boot tech, as an upper end model of boot (i.e. DaleBoots), and will begin to make its way into cheaper and cheaper models.
Feb 3 2014 7:20PM 4 0

Linked
Posts: 325 - Karma: 216
Karma: 216
Posts: 325
Loner
since you would have to scan the person foot to make the print, why not then have software that will take the digital version of the foot and selects the boots that would fit there feet best and identify where they might have potential problems with each of the boots. It would be a cheaper alternative to printing a liner for your average skier.
Feb 3 2014 7:39PM 2 0

BlackcountryBill
Posts: 955 - Karma: 563
Karma: 563
Posts: 955
Insane
How is this better than a thermoplastic boot remoulded to your foot, a la Fischer vacuum or the solly customfits? What benefit do you think you'll get from printing a boot?

You're adding a huge amount of cost into the production process EVEN IF the technology was there.
Feb 3 2014 8:57PM 2 0 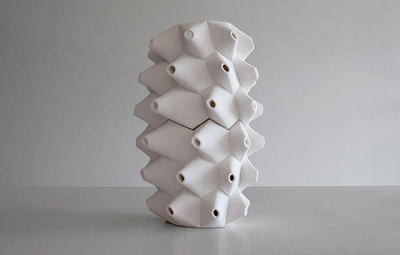 Theoretically you could also use a 3d scanner to create a 3d model of your foot, and then design the boot around that in conjunction with a heat mold-able liner. You could print the shells in pieces (2 or 3 piece) and use standard hardware to hold them together. If this actually gets done I would like a way to adjust shell thicknesses in some areas to adjust flex characteristics. Like having a thinner area around your ankle for better flex. Someone with more money then I have tackle this project.
Feb 4 2014 12:39AM 4 0

jadavis
Posts: 142 - Karma: 137
Karma: 137
Posts: 142
Pro
If you were going to print a ski boot the way to do it would be print it up on a powder printer in two halves and use those to create a mold for the shell and or liners. 3D printers usually print with an infill of around 10-15%, so they don't put out a strong product at all. That and building something up in layers is nowhere near as strong as a solid molded part.
The real issue would be cost, though. You might as well be paying for a completely custom boot and then some since it would take an engineer at least a day to make (parts the size of a ski boot take forever to print if you even have a printer that big). Quick math... you would be paying the engineer about $450 for the design alone so adding materials would boost the cost a ton.
Feb 4 2014 2:16AM 0 0

There's this whole hype train around 3d printing right now. Nothing that mind blowing is going down if you consider what we've been doing for years already.

_Cats_
Posts: 6 - Karma: 28
Karma: 28
Posts: 6
Newb
A cnc machine cuts something out of a larger block of material and a 3d printer actually lays down layers of material (usually plastic). So its really not close to a cnc machine.
https://www.youtube.com/watch?v=YAN-fj77HXc#t=12

"The first thing to note is that 3D printing is characterized as "additive" manufacturing, which means that a solid, three-dimensional object is constructed by adding material in layers. This is in contrast to regular "subtractive" manufacturing, through which an object is constructed by cutting (or "machining") raw material into a desired shape."
Source http://mashable.com/2013/03/28/3d-printing-explained/
Feb 4 2014 10:09AM 4 0


1 --- Architects begin preparations for constructing the world's first 3D-printed building. The building will be constructed of a high-strength artificial marble laid down by an industrial-scale 3D printer, and is planned for completion in 2014


2 --- The ESA, in collaboration with a group of architectural firms, designs and tests a 3D-printed structure that can be built out of lunar regolith to serve as a Moon base.


3 --- Scientists at Scotland's Heriot-Watt University develop a 3D printer that can produce clusters of living stem cells, potentially allowing complete organs to be printed on demand in future.


4 --- In a series of separate developments, American and Japanese engineers create 3D printers that can produce edible meals with a range of flavours and textures on demand. These could both replace conventional ready meals and allow astronauts to enjoy a far more varied diet


5 --- Cornell University scientists use a 3D printer to create a living artificial ear from collagen and ear cell cultures. In future, such ears could be grown to order for patients suffering from ear trauma or amputation.


6 --- An American company constructs a lightweight, high-efficiency urban car with an entirely 3D-printed plastic body that is as damage-resistant as steel. The vehicle's construction is entirely automated, requiring no human input beyond the uploading of the car's design


7 --- In a world first, researchers replace 75 percent of an injured patient's skull with a precision 3D-printed polymer replacement implant. In future, damaged bones may routinely be replaced with custom-manufactured implants.


9 --- American scientists use 3D printing to manufacture a new class of microscopic batteries, which may allow the easy production of extremely small medical devices, nanorobots and communications systems.


10 --- A New Zealand student designs a "skeletal" 3D-printable orthopedic cast that offers far greater lightness, cleanliness and ventilation than conventional casts, and can be personalized to suit individual patients and specific injuries.


11 --- North Carolina State University researchers demonstrate a method of 3D printing liquid metal at room temperature, forming freestanding structures which maintain their shape despite initially remaining liquid. The invention, which uses an alloy of gallium and indium, could allow electronic circuitry and even flexible wiring to be printed on demand.


12 --- NASA engineers successfully test a rocket engine with a fully 3D-printed injector, proving that critical rocket components can be produced through 3D printing without compromising their effectiveness
Feb 4 2014 11:07AM 3 0

Tree60
Posts: 1438 - Karma: 4,961
Karma: 4,961
Posts: 1438
Insane
The big thing with 3d printing is the customizability and cost of it all. In the past for making plastic shapes, the only real option was a mold. If you want to make any changes whatsoever with a mold, you need a new mold, but one 3D printer can do as many different shapes as you want. Now that the price of using them has gone down to a feasible amount, it's looking very promising as the future of plastics engineering on some level.
Feb 4 2014 2:15PM 1 0