Snowtorious_BIG
Posts: 659 - Karma: 1,467
Karma: 1,467
Posts: 659
Ridiculous
I don't understand why people are making jokes and saying they don't care about this, but when Paul Walker died everyone lost their shit. I don't really know either of the actors, but it's sad that both of them died. I can never understand why the public reacts the way they do to this kind of thing.
Feb 2 2014 11:46PM 5 2

theabortionator
Posts: 47336 - Karma: 111,596
Karma: 111,596
Posts: 47336
Basement Dweller
No shit. Somebody who people have seen in movies matters more to people than a person they've never heard of. And people barely knew or cared about him when he was alive? So you didn't know anything about him, hadn't seen his movies, or didn't care about him, that's fine but how can you post that as if that goes for everyone?

lIllI
Posts: 1255 - Karma: 1,985
Karma: 1,985
Posts: 1255
Insane
The difference is that Philip Seymour Hoffman was arguably the greatest cinema actor of our time. Paul Walker was a mediocre actor who starred in action movies for teenagers. This isn't just another celebrity death; Hoffman was one of the best.
Feb 3 2014 11:18AM 2 0

lIllI
Posts: 1255 - Karma: 1,985
Karma: 1,985
Posts: 1255
Insane
I didn't personally know him, so that isn't really sensible. I have no obligation to give him any sort of outstanding respect based on his actions that have no effect on me. Hoffman provided me with years of amazing acting, so naturally I'm obligated to be more upset about his death than Walker's.

HitTheJim
Posts: 787 - Karma: 391
Karma: 391
Posts: 787
Ridiculous
I hate when people bitch about celebrity deaths getting more attention than a "normal" person's death. Obviously a celebrity's death will be treated differently, as a celebrity they have a far reaching impact and more people care about what happens to them. It's simple as that.
Feb 3 2014 3:10PM 1 0

stickski
Posts: 1938 - Karma: 1,525
Karma: 1,525
Posts: 1938
Insane
This dichotomy you present is so illogical. You think there aren't underlying issues in both cases that lead to drug use/suicide? Drug use and suicide are symptoms. People don't just choose to kill themselves one day. I would argue that I respect someone battling depression more than someone battling drug addiction because no one chooses to have a mental health disorder. I really think both are tragedies but certainly don't hold drug users higher than people who commit suicide.
Feb 3 2014 4:38PM 0 0

lIllI
Posts: 1255 - Karma: 1,985
Karma: 1,985
Posts: 1255
Insane
I am curious as to why you feel the need to used create derogatory labels to distance yourself from people who have found themselves wandering down darker alleys in life, as if you are somehow superior either morally or in a survivalist sense, which especially isn't the case if you partake in any action sports (considering that you don't know who Doug Coombs is, I assume you're not big into skiing).

I don't really care if you don't give a shit that he is dead, or that you were unaffected by his presence in the arts (after all, you have no obligation to) - hell, I'd say this is less about Hoffman and more about your underdeveloped and simplistic outlook on life. Maybe when you leave your little idealistic 20's-bubble and get a dose of the real world, you'll see how precarious life really is, either by acts of nature or the search for peace from our demons through our own self-destructive acts. I don't blame anyone for wanting to see the world in black and white, but don't get all self-righteous over the fact that deep down, you're too much of a coward to acknowledge the human condition for what it is and instead take solace in dismissive labels and condescending chest beating. I can name too many great people who died with needles in their arms who were ten times the man you'll ever be as long as you maintain that shit attitude. I don't understand why people are getting pissed at you; I just feel sorry for you.

El_Barto.
Posts: 11618 - Karma: 24,067
Karma: 24,067
Posts: 11618
Crazy Fool
Not really. AR6 isnt wrong. Is your life so dull that you have time to mourn those who have no impact on you. He might have been a great actor but if he didnt play those roles someone else would have. He died, that sucks. It sucks when people die. I sure as hell am not going to lose sleep over some guy i didnt know and never would have know dying.

AR6 is just a realist. The kind of dude that would fire your ass two weeks before christmas even if you were a single parent with 5 kids. And he would only fire you if you deserved it
Feb 3 2014 7:30PM 3 1 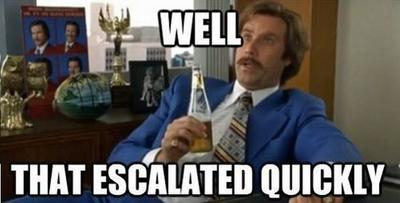 You can't judge a man you've never met. Hell you hardly know your own blood relatives enough to judge them. Suicide and addiction obviously have serious underlying issues. Mental health is such a mystery and suicide isn't necessarily the "cowards" way out.
A friend of mine committed suicide after suffering debilitating and inexplicable chronic pain for years. In and out of a wheel chair, not being able to feed yourself, relying on your family. He considered his options, realized he was probably going to have this pain and condition for his whole life, realized what a burden it was on his family and ended it. Was he a coward? No.
Addiction is another serious mental health issue. Those who haven't suffered can't comprehend the calls, the withdrawal, the physiological aspects. As a health care professional you should be completely ashamed AR6. You have no right to judge this gentleman, and clearly aren't capable of a professional opinion. He suffered from drug addiction in his younger years and mentioned relapsing recently after 23 years of being clean. Everyone makes mistakes. He overdosed, it is tragic, addiction is tragic.
He was a phenomenal actor. Can I judge his character by the way he died or presented himself on screen? No, I have no idea what he was like as a person.
You don't know who Doug Coombs is? Really?
Feb 3 2014 7:30PM 4 0

My life isn't impacted by the work of an artist I admire? In what universe is that a remotely sensible thing to say?

I'm not mourning anyone, just acknowledging that it's reasonable for people to be upset over the loss of a prominent figure in a field they themselves at least identify with somewhat. I wasn't upset over Warnick's death, but I didn't sit here and call him a worthless loser because drug addiction is so much more complex than that. Don't give me that realist crap; if you honestly think life is that simple then you're the one living in the fantasy world.
Feb 3 2014 7:52PM 0 0

El_Barto.
Posts: 11618 - Karma: 24,067
Karma: 24,067
Posts: 11618
Crazy Fool
I dont know you or anything about you. What im about to say isnt directed at you. If you cant detach yourself from shit like this you will be bowled over by guys like me and AR6 who will push you in the mud and step on your back just so our shoes dont get dirty. Give me a chance and I will do everything i can to prop myself up at your expense.

Sure it makes me an asshole but it also means that i never get stepped on. Enjoy being sensitive to stupid shit.
Feb 3 2014 8:01PM 1 2

lIllI
Posts: 1255 - Karma: 1,985
Karma: 1,985
Posts: 1255
Insane
What in God's holy name are you blathering about? His death has no actual impact on my life, but that doesn't mean I can't acknowledge his legacy despite the circumstances of his death.

You're acting like I'm personally offended (which is interesting, considering that most people say I'm a cynical asshole). As stated before, I have no personal beef with your love duo's shared opinion. I just think it's illogical. There are probably some good arguments for your beliefs, but so far none of them have been presented; instead the best you two seem to be able to do is some variant of calling people pussies and going on some moral tangent about opportunism. How the fuck is that relevant?

My point is simply this: if someone admires an accomplished artist, and that artist dies (regardless of how pitiful or graceful), it is understandable for that person to say "well that's a bummer." But saying that a pitiful death somehow negates their lifetime of work is just fucking stupid, regardless of your opinion.

skiingperson1
Posts: 670 - Karma: 145
Karma: 145
Posts: 670
Ridiculous
Man, now I remember why I don't come to non-ski gabber anymore. Because so many of the people here are such assholes.
Anyway, one of my favorite actors. He was great in everything he did, my favorites being The Master, Boogie Nights and Synecdoche, New York. It's a shame his life had to end this way.
Feb 3 2014 10:09PM 1 0

monstertruckk
Posts: 3044 - Karma: 454
Karma: 454
Posts: 3044
Addict
There's this thing called relapsing and it occurs more often than not. No body knows what was going on inside his head leading up to this and at the time, but I'd imagine he was getting pulled in every direction by thngs he had no control over. Addiction is a hell of a thing and something that is extremely difficult ( impossible ) to Truly kick. Just another brother lost chasing that dragon. RIP. And if nothing else to all of you. Make sure you never pick up that needle. It will get ya.
Feb 4 2014 9:48AM 0 0
All times are Eastern (-4)