This years scheduled stops are:


The Copper Mtn. halfpipe event will also serve as a last chance qualifier to get into the U.S. Grand Prix, which is the Olympic qualification series for freeskiing athletes in the U.S., and will ultimately select the athletes who will compete for the U.S. Olympic Freeskiing team at the Sochi Winter Olympics in February.

We will be around all season to keep you guys updated and answer any questions you may have, so feel free to ask away.

Athlete registration opens on November 5, 2013 at 10 a.m. on www.thenorthfaceppos.com. 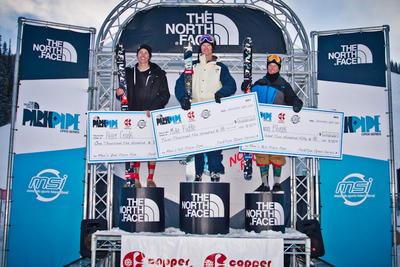 [hank]
Posts: 907 - Karma: 1,696
Karma: 1,696
Posts: 907
Insane
SERIOUSLY YOU GUYS!?
Not cool at all with this year's setup. No slopestyle in copper is a huge blow for competitors in all of Colorado, which, if you haven't noticed, is the premier slopestyle competition area in the world!
And stratton same weekend as aspen open? I'm honestly really bummed about this whole situation. A lot of good riders are being excluded from a sweet opportunity to compete. Could there at least be like a rail jam in Copper?
Oct 25 2013 6:31PM 1 0