KingGeedorah
Posts: 890 - Karma: 1,572
Karma: 1,572
Posts: 890
Insane
I'm sure that there's a decent amount of you who are familiar with Thrasher Magazine. Of those people there have to be at least a few who are familiar with the King of the Road or KOTR competition. For those who aren't, it's an annual event where teams for skateboarding companies each have a van that they take to several locations, and they receive a book of challenges [URL]http://www.thrashermagazine.com/articles/king-of-the-road-2013-the-book/[/URL] which they need to complete for points. The team who accumulates the most points by the end of it wins. Anyways, I think that it would be awesome if skiing had something similar to this. The teams could be companies, or better yet film crews. The only problems I see with it would be teams not being able to fund a van or take time out of their schedules to do it. Newschoolers should sponsor this shit, or at least compile the footage. What does NS think?
Oct 3 2013 10:39PM 38 4

Not exactly like KOTR, but they could set up a bunch of random jibs, bonks, and kickers all over hood for a week in the summer, and do a trick book for those. They could do teams by brand, film company, or just pick captains. It seems like it would work because a lot of pros are at Hood in the summer and they wouldn't be taking time out of comp/filming.

Complete all the tasks to receive a special prize pack from Saga Outerwear. Each task must be signed off for by a Windells Camp employee once it is completed. When all the tasks are complete return this sheet to SAIGL no later than 5pm on day 6. The FIRST GROUP to turn in a completed sheet will have a prize pack delivered to you before the end of the session. You may complete this list on your own or with a group. NO MORE THAN 4 PEOPLE TO A GROUP!

We got the idea from KOTR. It would be awesome to do a full fledged thing. The hard part is Winter is such a short season and so un predictable and expensive. You can't do a lot of the street stuff because people would have to be traveling all over the country chasing snow. And the park stuff would require lift tickets. It can be done. But it will take someone to really get involved.

lecjladd
Posts: 379 - Karma: 966
Karma: 966
Posts: 379
Loner
First off, I whole heartedly agree a king of the road for skiing would be awesome. Similar to Thrasher where there are a few target cities there could be a few target resorts, along with normal road trip shenanigan challenges to be productive (and get entertaining footage) while traveling.
However, I think we could even think smaller than this and potentially raise the eye brows of freeskier or something like that on how awesome this could be.. NS KOTR.
Skateperception does a forum wide KOTR every year where you can form teams (whether its your crew or whoever else available to you) and participate. Usually the team has to submit an "entry fee" before a particular date. The entry fee is used for prizes later. Then a couple days later a list is posted on the official thread consisting of random tasks, fun jams, grinds, flip tricks.. whatever, along with their point values. For skiing it could be broken down into "Shenanigans", "Urban", Resort "Small, Medium, and Large".. and maybe even some "Backcountry" stuff!
Usually everyone has about a few weeks to a month to film and edit a part to submit for their team by the due date. Once everything is submitted, everyone gets to vote on the winners based on their edit. We could distribute the entry fees to a "best edit" and a "most points earned". This is typically awesome as different teams will pursue a different goal. However there is usually a minimum point requirement you must hit to be considered for a win.
I honestly think this would work really well here and it is a really fun thing to indulge in even if you aren't participating. Also, it usually results in a crap ton of really great edits to watch! Guessing totallytrevor. would be real special.
Here is a link to the past years skateperception KOTR thread:
http://forums.skateperception.com/index.php?/topic/306973-skate-perception-king-of-the-road-2013-rules-and-task-list/?hl=kotr#entry4155534
If this had some interest I would be entirely down to help organize. I always had fun with this on SkatePerception.
Oct 5 2013 1:26PM 4 0

lecjladd
Posts: 379 - Karma: 966
Karma: 966
Posts: 379
Loner
Also in reply to a comment Saga had. This could be open to any general "resort". Most people on this forum have season passes I would assume so their will be no pressure to move to another resort unless it is something they are really wanting to invest in.
Oct 5 2013 1:28PM 0 0 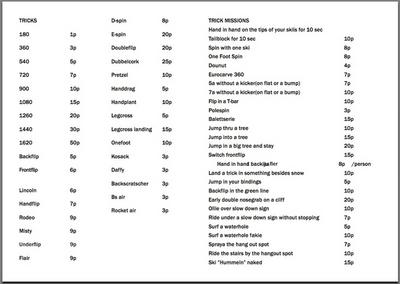 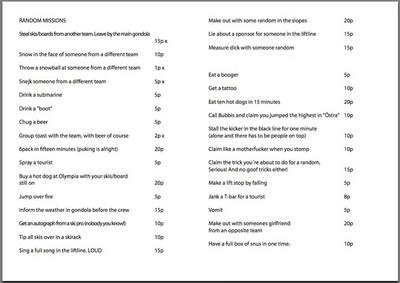 NS's paid contributor system seems like it's perfectly set up for someone to do a project like this. Paging Bishop and Moose!
Oct 5 2013 7:37PM 3 0

Saga.
Posts: 3740 - Karma: 44,008
Karma: 44,008
Posts: 3740
Addict
If there is enough popular support for this idea you don't need a sponsor to put it on. As a community you can just create it and enough people will be hyped on it that competing in it will create enough hype to where the stand out crews and the winner gains enough exposure and recognition that it's worth it.
Think about it this way. Why are certain people who make edits more popular and revered than others? Because there is a large group of people who are talking about and promoting them. You (the NS community) could turn this into a true crowd sourced event. And without a sponsor it would be very underground and could for that reason get more credibility. These forums are an incredibly powerful tool that hasn't really been used to their full potential by skiers yet.
As a community you can create the parameters for the competition and then run it all yourselves. It would show the real power of this community.
Oct 5 2013 10:04PM 2 0

didn't they stop doing it because they thought someone might die or something if they took it any further...? i thought there was more booze-related challenges, but maybe these dudes just planned on being hammered the whole time anyway
Oct 6 2013 3:13AM 1 0