MTB VS FOOTBALL on Pinkbike

Cufe.
Posts: 1950 - Karma: 252
Karma: 252
Posts: 1950
Insane
Any time diving comes into play it just looks ridiculous. That said there is absolutely no incentive for a MTB rider to try to play up any contact or injury, in soccer there is.
It's apples to oranges, at least hockey to soccer would be more comparable as both sports have rules, teams, and refs.
Oct 3 2013 12:11PM 8 1

marsh.
Posts: 1173 - Karma: 1,397
Karma: 1,397
Posts: 1173
Insane
I think most diving occurs out of desperation, at least the diving i have seen first hand. Soccer is obviously one of the most difficult sports, but it gets a bad rep because people make videos like this. If any of you had ever played soccer, you'd see how much fun it can be.
With that being said, i say you should be more open minded and try soccer, who knows, maybe you'll like it as much as the 250 million people that play.
Oct 3 2013 12:25PM 2 1

I played soccer, enjoyed the sport, hated the pussy aspect. Soccer is fun but a huge chunk of the players are a goddamn disgrace to manhood
Oct 3 2013 12:51PM 6 4

Until the risk is too high for the reward, diving will continue to taint and ruin professional soccer.
Oct 3 2013 1:17PM 3 0

everyone knows that there's lots of embarrassing diving and theatrics in soccer, nothing new there. like a couple people have said, there are reasons (certainly not excuses...) for it, one of the biggest being that FIFA is retarded

Charlie_Kelly
Posts: 11793 - Karma: 10,672
Karma: 10,672
Posts: 11793
Crazy Fool
But how in any way would diving on a mountain bike help the "team" out? At least in soccer you afford yourself the chance to give your teammates some rest/possible get a penalty.

Let's face it, by skiierman posting this video he just proved how much of a worthless fucking ginger he is. He's fucking comparing apples to triceratops'.
Oct 3 2013 2:52PM 3 1

Caspaaa
Posts: 4830 - Karma: 1,374
Karma: 1,374
Posts: 4830
No Life
One successful dive can win you the game in soccer. If eating shit the right way in mountain biking or in skiing could win you the competition you can bet your ass people would do it. Yes it conjures a bad image but it wins games. Also, professional soccer players are some of the most fit athletes in the world, certainly more so than mountain bikers. Mountain bikers have balls of steel though - no doubt about it.
Besides, the video is a horrible comparison. You're comparing people in one sport who are purposefully diving to people in another sport who are eating shit. Obviously the latter is going to look more extreme. Especially when the latter sport is considered to be an extreme sport, while the former is a competitive sport.
That's like comparing Nascar crashes to people getting injured in baseball. You crash in Nascar - you die, you eat shit in baseball - you walk away with a pulled hamstring.
Oct 3 2013 2:53PM 7 0

Toaster-Tony
Posts: 3527 - Karma: 5,807
Karma: 5,807
Posts: 3527
Addict
I'm not sure what comparison that video is trying to make. Those sports aren't even close to being similar, one is an extreme sport taking place on natural terrain and the other is played in an organized setting on a field.
If you're saying that there is more risk involved with extreme mountain biking.. cool, you win.
...But I do agree with the fact that the amount of diving that goes on in soccer is a disgrace to the sport. Nothing makes me more upset than seeing a bunch of professional athletes sacrificing their pride and rolling on the ground in order to maybe get a penalty called.
Oct 3 2013 3:10PM 2 0

Miomo
Posts: 4301 - Karma: 14,084
Karma: 14,084
Posts: 4301
No Life
The video isn't comparing dives, because the bikers don't dive. It's to show how much soccer players are pussies. The soccer players have absolutely nothing to complain about because "Ohhhh he touched me" is nothing compared to falling three stories. It's comparing the cause, not the act.
Oct 3 2013 4:41PM 1 1

I'm not some perfect gift sent by god to grace this prepubescent scum-filled website. That's asinine. 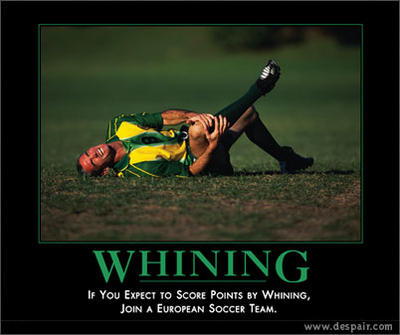 M.M
Posts: 1666 - Karma: 4,280
Karma: 4,280
Posts: 1666
Insane
bad comparison but, soccer players still are pussies, i get the points some people made about diving could win you the game, but when they do actually get hurt, they are huge pussies, like you dont need a stretcher because you got a concussion or broken wrist, look at hockey players they get a puck to the face, they pull their teeth out and play the rest of the game, a couple guys have even played through with broken legs and feet.
Oct 4 2013 12:41AM 0 3

Caspaaa
Posts: 4830 - Karma: 1,374
Karma: 1,374
Posts: 4830
No Life
Mountain bikers don't dive because there is no potential benefit from diving. Stop comparing crashes to dives, you're not only throwing your logic out of the window, you're literally lighting it on fire, pushing it from a skyscraper, and then dropping a bomb on it once it hits the ground.
TLDR - your comparison blows almost as much dick as you do
Oct 4 2013 1:17PM 0 1

broto
Posts: 8910 - Karma: 23,069
Karma: 23,069
Posts: 8910
Crazy Fool
why don't you post a video of worst mtn bike crashes vs worst soccer injuries (petr cech's accident that nearly killed him, pepe reina just the other night got a cut stapled and continued play, etc.)? i'm not saying the soccer ones would be worse just that this comparison makes no sense

90053
Posts: 2565 - Karma: 3,716
Karma: 3,716
Posts: 2565
Addict
uh yes, don't be silly
regardless of which sport is more skilful, there are a far more football/soccer players than ice hockey players it is therefore more competitive and in turn requires more skill to perform at the highest level
i play what you guys would call field hockey which has a pretty high skill level and soccer/football is far harder
Oct 4 2013 5:26PM 0 0

Cufe.
Posts: 1950 - Karma: 252
Karma: 252
Posts: 1950
Insane
Now maybe I am just crazy, but I think anyone performing at the top level of their sport has to have some pretty crazy skill. Different skills for different sports? Absolutely. But regardless anyone in the professional leagues has to have a shit tonne of natural skill, then even more training and practice on top of that to even enter the pro level of most sports.

It is like arguing over super cars, yes some are more tuned in one area or another, but regardless they are all incredible.
Oct 4 2013 6:09PM 0 0
All times are Eastern (-4)