AlexFogo85
Posts: 536 - Karma: 7,252
Karma: 7,252
Posts: 536
Ridiculous
Obviously it would suck to get all the way out to a good spot, setup, and then realize you can't get the shot because you forget something essential. Here are some things I believe are highly suggested to get an urban shot.
1. A good spot (well duh)
2. Good skier(s) (no shit)
3. A camera (DSLR recommended), and a good filmer... these are both optional of course, but your friends are gonna think its a claim if you don't have proof, so bring the camera anyway.
4. A photographer... obviously it could be the same person who is filming, but for anyone really serious about getting shots and pictures...it may be a good idea to have a filmer and a photographer.
5. (Now the real supplies) A shovel, in fact bring a few.
6. Salt, don't want that kicker to collapse on the approach.
7. LIGHT, a shot isn't going to look too good without enough light to see. Those parking lot lamps do not do the trick, bring a flood light or two.
8. Water, you'll thank me later for this one.
9. Red bull/Monster/etc. If you're getting a shot out past your bedtime, you may want some energy.
10. Bungee; A lot of urban spots are not going to have lots of run in space to get speed without one and bringing that one friend along just to pull you the whole time doesn't blow over well either.
11. Granola bar/snack; if you're an amateur like Steve Stepp ;) then its probably going to take a while to get a good shot, bring some food.
I am probably missing some key items so feel free to add whatever you think is something important to bring to an urban session.
Aug 13 2013 4:45PM 434 44

Big scoop shovels save a lot of time.

Money, drugs, prostitutes, or other contraband that will extend the session when property owners or policia come to bust you.
Aug 13 2013 5:09PM 26 0 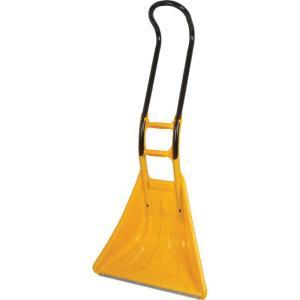 If you want to build something quality and do it quick, ^ that is the tool. I have one for myself and bought 2 for our freestyle program. You can move a ton of snow easily and it does an awesome job of shaping too. They are about $35 on Homedepot's website. I have had mine for 2 year. It is light weight and can take some serious abuse. I submit this into evidence: 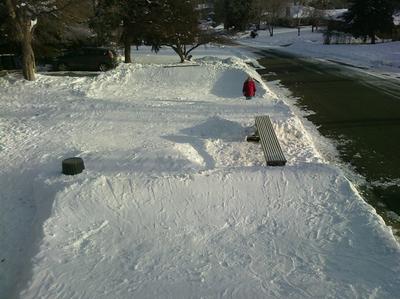 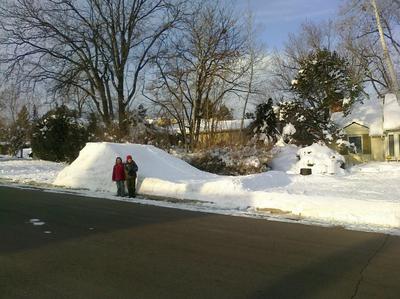 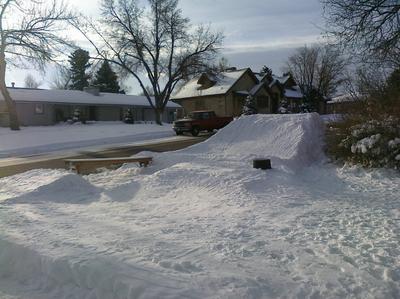 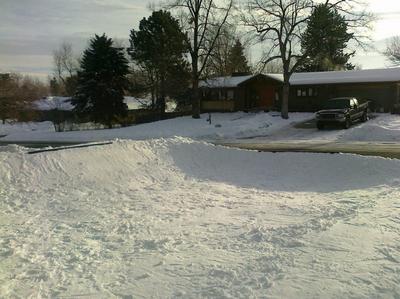 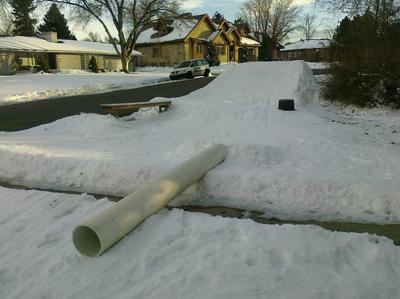 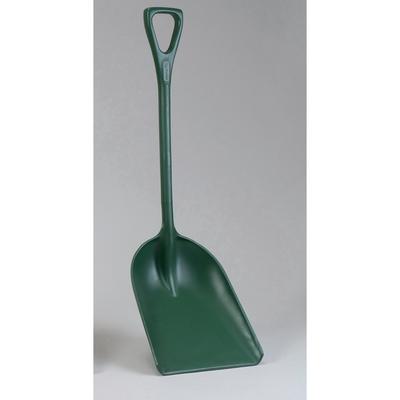 Brentizzle
Posts: 1584 - Karma: 1,860
Karma: 1,860
Posts: 1584
Insane
haha yes I have in fact. I find these http://www.canadiantire.ca/AST/browse/2/OutdoorLiving/SnowRemoval/SnowShovels/PRD~0596944P/Yardworks+Sleigh+Shovel%2C+22-in.jsp?locale=en to be much more useful. But everybody has their own opinions. I find with that yellow one that it wants to be a pusher and and a scooper but ends up sucking at both because its hard to get any power behind it. But like I said, that just my opinion from my experience.

Saga.
Posts: 3754 - Karma: 44,195
Karma: 44,195
Posts: 3754
Addict
Sometimes yes. But if you are hitting a spot near a decent sized business they usually have an outdoor outlet somewhere. This is the best find. No need for excess noise. Just a couple long extension cords and you're gold. Spend a an hour or so casually scoping a spot before you go there and you will find the best/easiest way to get the job done instead of showing up when its go time and wasting an hour getting everything together. With some spots the faster you can get in and out the better.
Aug 14 2013 11:54PM 2 0 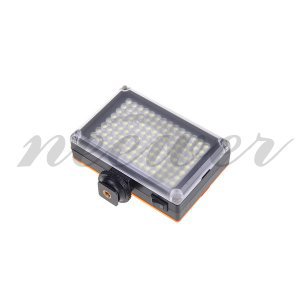 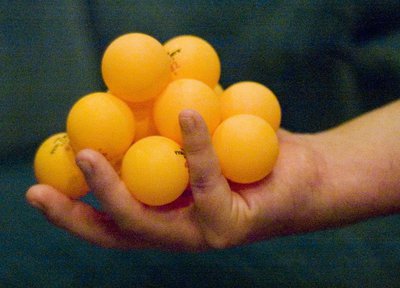 RedLineFilms
Posts: 37 - Karma: 1,892
Karma: 1,892
Posts: 37
Lame
We filmed 62 spots in four months last season and I spent hundreds of hours behind the camera. We learned a lot about urban skiing and equipments during the season. Check out our urban skiing movie trailer: http://www.youtube.com/watch?v=n499JITl6Uk and behind the scenes: http://www.youtube.com/watch?v=6NpWcLeRt-M
But I'll list some important things for urbans...
- Skiing equipment, especially a helmet is important! Urban skiing has lots of risks so safety first!
- Bungee/winch/drop-in ramp or what ever you use (+maybe some extra rope for bungee)
- Enough people to help and pull bungee
- Water or salt for kicker (it's better to take too much especially if you hit more than one spot)
- Shovels, we had usually like 3 or 4 shovels (the more the better)
- Camera equipment: cameras, lots of batteries, enough memorycards and other optional equipment like mics, tripods, glidecams, dollies, cranes, quickrelease plates, lens cleaning equipment, viewfinders and sometimes waterproof camera cover case (or just a plastic bag) is great. My cheap sony videocam broke up last season because it wasn't covered in the rain. Monkey pod is also a good equipment in some cases.
- Lights and some powerstrip, the more the better, 2kW of lights is good (we use working lights with halogen bulbs because they are cheap)
- A generator, gas can and maybe some spare parts like spark plugs. We have multiple generators: 2x 700W 2-stroke genes, 1x 2kW 4-stroke gene and for some spots we lend my friend's 4kW gene. Try to find pretty quiet version or build snow walls around the gene if it's too loud to avoid getting busted or kicked out. Sometimes we have found wallplugs here in Finland so you don't have to use gene in every spot.
- Some tools like screwdriver for fixing generator, skis or what ever. Also it's good to have a ducktape and a file or even an angle grinder if you have too sharp edges. Sometimes you may need tools like knife, saw, hammer etc. The more tools the better, you never know what you may need.
- Something to eat and drink. Some spots may take one or two hour but usually it takes more time. Last season we had couple 12 hour filming days and usually we ate junk food and energy drinks between the spots. For long days and night sessions it's good to have some food&drinks what gives you energy.
- Warm clothing, as I said we had long days and nights so it's important to have warm clothing. Especially if you're a filmer and you have to stand behind the camera for hours. The most important thing is warm shoes if you're behind camera. So forget your Nikes and wear something warm. Sometimes it was over -20 degrees of celcius when we were filming so it was important to have warm clothes.
- A lot of motivation! Some shots need less than 10 tries and some need over 100 tries so it's important to be motivated and prepare yourself for that you may have to stand behind the camera for 6 hours or even more. Sometimes you don't get any shots but don't give up because failing sometimes is part of urban skiing. We used to say each others "This is not so serious business..."
Maybe forgot something so add if you have something in your mind. After 4 months and 62 spots of urbans I realized that you really have to work hard if you want to make urban skiing movie like Stept. So big props to Stept. Mutiny had a realistic story about urban skiing and it needed a lot of work. Really respect you guys and other crews who film mainly urbans! So be motivated, ski urbans, film urbans, make urban edits/movies because there's never too much urban action! Urban skiing is the shit nowadays so do it kids!
PS. I hope you understand my english...
Aug 15 2013 8:40AM 8 1

Saga.
Posts: 3754 - Karma: 44,195
Karma: 44,195
Posts: 3754
Addict
Looked for something like this awhile ago. I don't know if such a thing exist. Light powerful enough to light up a spot take a lot of power. I'm sure there's a way to rig something up using a car battery or something weird if you're good with that but for the most part I don't think you're going to be able to find something that can have enough light to run off batteries.
Sep 14 2013 1:31AM 0 0