p-fo
Posts: 9372 - Karma: 6,090
Karma: 6,090
Posts: 9372
Crazy Fool
I missed an opportunity to see them live in Seattle a couple years ago. Still pissed to this day, because my friend told me it was incredible.
I have about half their albums, and I'm gonna have the full discography on my computer by the end of summer. I just need the Sloppy Seconds albums, Southernunderground and NWL. I've been lazy about music recently.
But their music is the shit. The pure lyricism paired with Kno's production is just unmatched.
Favorite song: "Hard As They Come" off of Oneirology. Gets me stoked.
May 16 2013 11:07PM 0 0

Bsand
Posts: 364 - Karma: 427
Karma: 427
Posts: 364
Loner
Every album they have ever put out is solid gold. If you ever have a chance to see them live do not pass it up because they have an incredible stage presence from start to finish. "Piece of Strange" will be hard to top for them but they continue to put out great music.
They make their beats from their lyrics, not put their lyrics over their beats.
Listen to" Brain Cell" it should hit home.

Saw them last year and it was definitely one of the better shows Ive ever been to.

Strange.Journey.
Posts: 1447 - Karma: 2,694
Karma: 2,694
Posts: 1447
Insane
my fave songs from them are definitely: Move off of Strange Journey vol 1 (from one of the old clown school edits), Dance For Me off of Dirty Acres (which was in everyday is a saturday by PBP) and The Gates off of A Piece of Strange. really wanna see them live and am super stoked for the release of Strange Journey Volume THREE. gunna be really good i hope
Dirt! by Clown*School
https://www.newschoolers.com/membervideo/306958.0/Dirt-?s=78388&t=6&o=8
Everyday is a Saturday East Rails segment by Poor Boyz Productions
http://www.youtube.com/watch?v=2AvGa4YSxfQ

The Gates off of A Piece of Strange
http://www.youtube.com/watch?v=gkmQ-mX8v_o

Schoellkopf
Posts: 1300 - Karma: 117
Karma: 117
Posts: 1300
Insane
CunninLynguists are one of the greatest hip hop groups ever (IMO). I wrote my entire final paper on them in a Hip Hop class.
For people who are interested in what they are up to now you should check out this page: https://www.facebook.com/cl.sjv3
Their next album is completely done with the influence of the audience, people voted who they wanted to see on the album and who they wanted to produce beats alongside Kno. Shit is sick.
And this is a screen print I did of their red headed chick who appears A Piece Of Strange and Oneirology (although I don't know if it's supposed to be the same person). 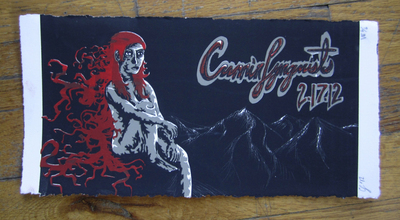